It may not be autumn, but it is fall… At least as far as we are concerned. We are only a few days into our fall monitoring season and we are already seeing birds actively migrating over. In last week’s article I talked about how the majority of early migrants are young birds and adult birds that didn’t successfully produce young. I elaborated a lot about the young birds but I ran out of space to talk about why the unsuccessful adult birds also start migrating early. It is a short explanation for that one – because why not? Adult birds that don’t have a brood of young to look after eventually just start heading south because there is no reason for them to stay. They came for the sole purpose of breeding and having failed that they start heading south again. Leaving early affords them the time to travel at a leisurely pace and take lots of breaks to feed and rest. If they are able to give themselves an easy fall migration they may be in better shape the following year when it is time to give parenting another shot.

So far this year we have actually seen a fair amount of adults migrating. Sadly, they are likely all birds that are escaping from the fires north of us. It is not news to anyone that we are having a very busy fire year. According to ESRD’s website there are 96 fires currently burning in Alberta consuming 457 200 hectares of land. Forest fires are a natural part of the boreal forest as much as the birds are, but this year the fire timing is definitely not good for the birds. It is too late in the year for birds that have been burned out of their territories to try nesting again but it is early enough that many young birds were likely not old enough to escape along with the adult birds. Throughout the rest of the fall we should be able to get a decent idea of how much the fires affected the overall bird populations – hopefully we will band the normal ratio of young birds to adult birds. 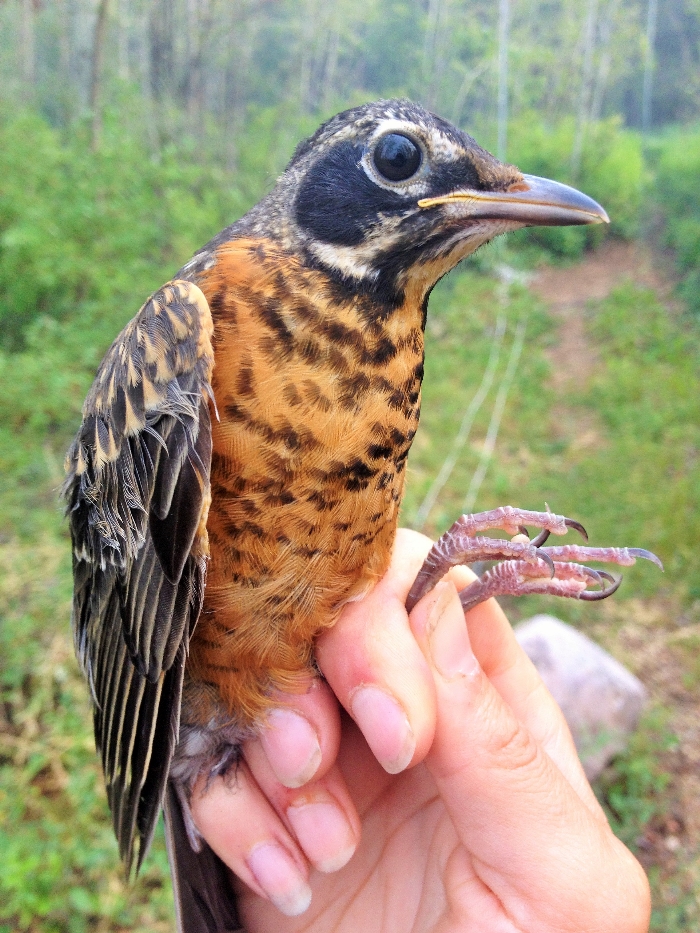 Aside from the adult evacuees we have seen, we’ve also encountered plenty of local fledglings. We have banded a handful of juvenile Lincoln’s sparrow, song sparrow, white-throated sparrow and myrtle warbler that were likely born in the trees and shrubs right around the lab. On the first day of banding we also managed to catch an entire family of American robins: five fledglings, a mother and two fathers… Not sure which of the adult males caught that day was the actual father and which was the home-wrecker. Perhaps the most exciting juveniles though, were all the fledgling woodpeckers. We don’t normally catch a lot of woodpeckers but in the first two days of banding we caught 5 baby hairy woodpeckers, 4 baby downy woodpeckers and 1 baby northern flicker.

Hairy and downy woodpeckers are both resident species that many people are familiar with since they like to visit feeders. Plumage-wise they look virtually identical – the only difference being that the downy woodpecker has black spots on its white outer-tail feathers whereas the hairy’s white outer-tail feathers are unmarked. Looking in a field guide, where all the drawings are the same size, causes many people to wonder how to tell these two species apart. I hope this picture helps. 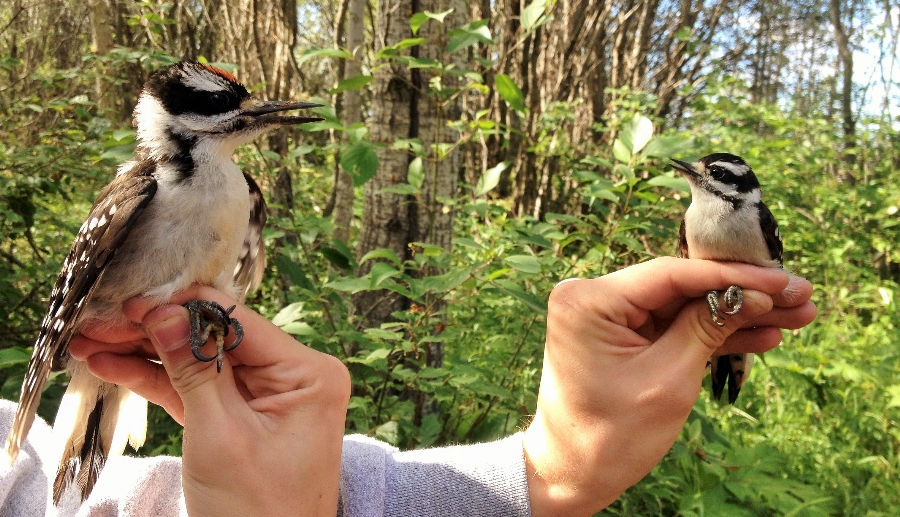