It has been a very cold and windy start to the 26th year of Spring Migration Monitoring at the Lesser Slave Lake Bird Observatory (LSLBO). We began monitoring on April 16th, but very few birds have been captured due to poor weather conditions. If the nets are being blown around too much on windy days, birds in the nets may become injured. Similarly, birds cannot easily warm themselves up while they are captured, so we do not open the nets if it is below 0 °C or windy. A closed net looks very similar to a large black rope strung between two metal poles – nothing can get caught in it. With the wind last week and the cold and snow this week, we could only open our nets for an average of 31% of our 7 hour daily monitoring window. So far only 41 birds of 9 species have been banded. 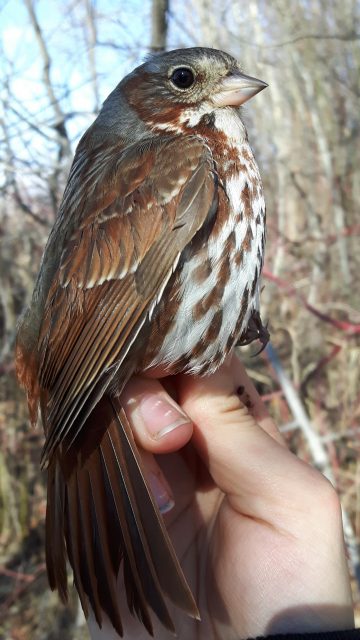 Despite the fact that we haven’t been catching many birds, we have still been recording migration activity daily with some large movements of American Robins and Dark-eyed Juncos. We are also still seeing many of the species that breed further north and are only passing through the area including American Tree Sparrows and Fox Sparrows (pictured). Nearly every day now we encounter a new species for the monitoring period as bird migration begins to pick up.

Along with the arrival of new bird species, this week also saw the arrival of our new assistants at the LSLBO for the field season. Joining the Bander-in-Charge, Robyn Perkins, is Laura Tabbakh and Bronwyn Robinson. 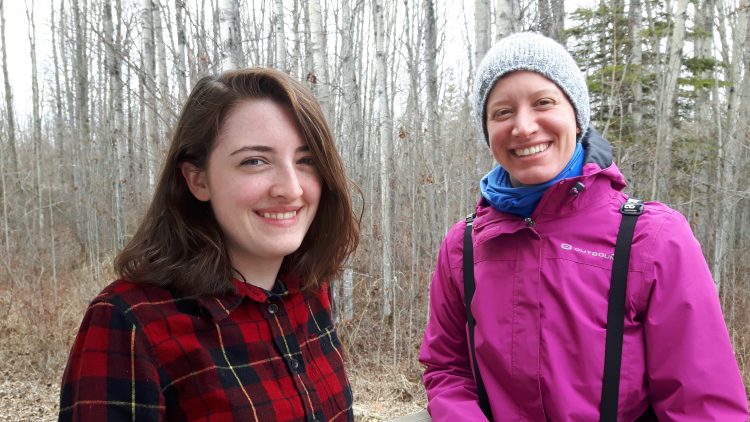 Pictured: Bronwyn Robinson (left) and Laura Tabbakh (right) join us from Eastern Canada for the season.

Tabbakh joins us from Montreal, Quebec and has a Bachelors of Science in Environmental Biology from McGill. When she was in university, she became best friends with a few ‘bird nerds’ that propelled her in the direction of avian research. She has ample experience from four bird observatories in three different provinces. She is looking forward to seeing new species that are not frequently found in Eastern Canada and is excited to be the furthest north she has ever been.

Robinson is from Brampton in Southern Ontario. She obtained a Bachelor of Science in Zoology from Guelph and has experience from two banding stations in Ontario. When she was 10 years old, her interests in birds was sparked by her pet parrot Kiki. She now has two pet budgies that are in the loving care of her parents back home. She is excited to see birds in their boreal forest breeding grounds that she has previously only seen on migration in their drab fall plumage.

We are very lucky to be joined by these enthusiastic and experienced assistants and have our fingers crossed that the weather will be more cooperative throughout the remainder of the field season.