Another week into spring migration and spring is still being evasive. Heavy snow and cold conditions have prevented banding nearly every day and only a handful of birds have been captured, including a couple sharp-shinned hawks and a hermit thrush. Despite slow banding, observations have been conducted every day and birds are still showing up and pushing northwards. Slate-coloured juncos were once again the most observed species and one morning over 3000 individuals were counted. Joining them in the skies were increasing numbers of myrtle warbler, orange-crowned warbler, blackbirds, American robin, fox sparrow, sandhill crane and the usual retinue of large waterfowl. 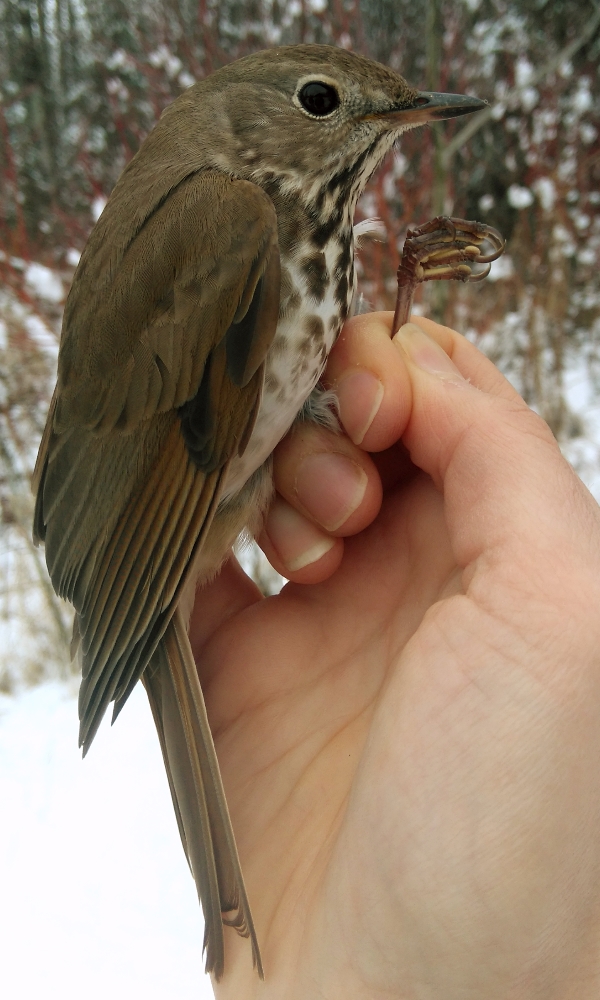 What I failed to mention last week, is that this spring I am not actually at the lab yet, just Richard is. I am currently providing technical support to a visiting researcher from the Columbia University in New York. Last spring Dr. Natalie Boelman and PhD students Ruthie Oliver and Brain Weeks were here to put GPS backpacks on American robins and it went so well that Ruthie Oliver has returned to do it again. Some of the result were published in this paper last year, but if you don’t recall, many of the birds banded and fitted with GPS harnesses were tracked all the way to Alaska, NWT and Yukon. The bird that travelled the furthest flew a whopping 3220 km further north from Slave Lake. This project is part of a larger project being funded by NASA looking at how migratory birds and mammals use the boreal forest. With access to all of NASA’s satellite imagery of the boreal forest over time, as well as their snow models, historical/current weather data, and land-use mapping the researchers should be able to form strong predictions about if migratory birds and mammals will be able to adapt to the changing landscape.

So far we have captured and fitted 22, of the targeted 30, American Robins with GPS units. Over the course of the summer as Ruthie updates me I will share with you the progress made by these space robins as we call them. If you would like to read more about the ‘space robin’ program you can check out the blog that Ruthie is sharing. https://earthobservatory.nasa.gov/blogs/fromthefield/2017/04/ . For me perhaps one of the most interesting things that has happened during this program is that we caught a rusty blackbird. The rusty blackbird looks a lot like the very common brewer’s blackbird that are a staple of Canadian fields and ditches, but they are one of North America’s most rapidly declining species. Their populations have decreased by an estimated 85-99 percent over the past forty years and bird biologists have no idea why. These small, bright-eyed blackbirds breed in muskeg and other wetland habitat and are very sensitive to habitat disturbances. The bird I caught is the first ever rusty blackbird ever captured by us, but unfortunately I couldn’t band it since I only have robin banding supplies where we are doing the GPS tagging work. Shucks – could have been the 106th species banded by the LSLBO. 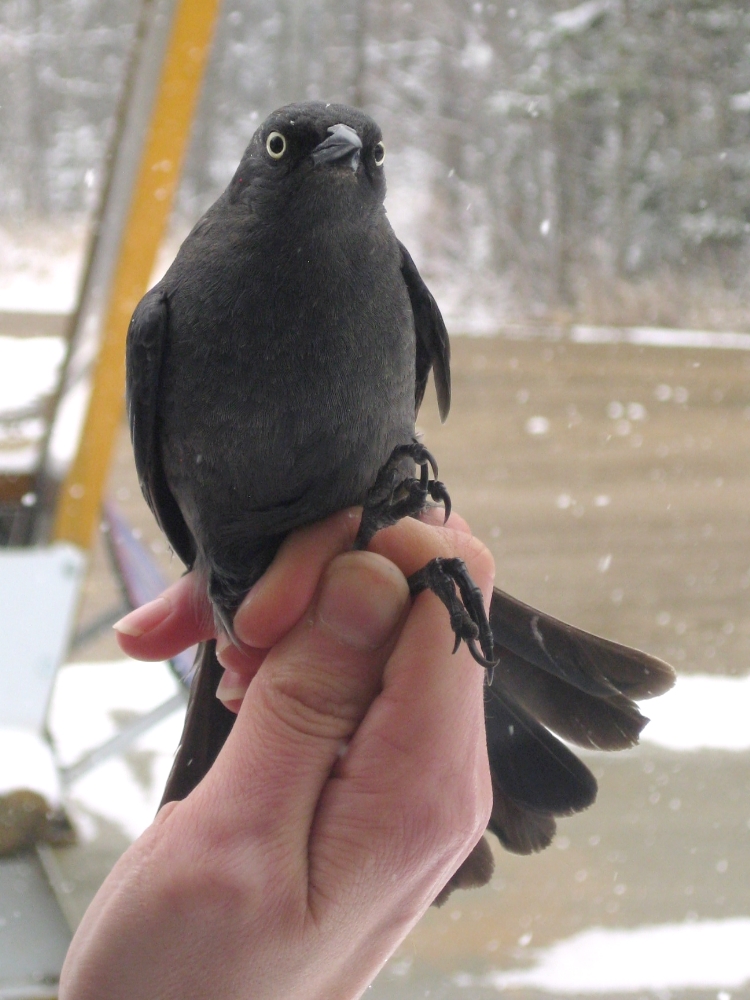