Fall Migration Monitoring continues to keep field staff busy at the Lesser Slave Lake Bird Observatory. As of August 9, we have already banded 1793 birds of 45 species. We are getting very few of our own bands recaptured, suggesting that many of our locally breeding birds have already left the area. With seven weeks left for Fall Migration Monitoring, we are curious how this season will compare to past years. It would not be surprising if it turns into one of our busiest falls for banding yet. 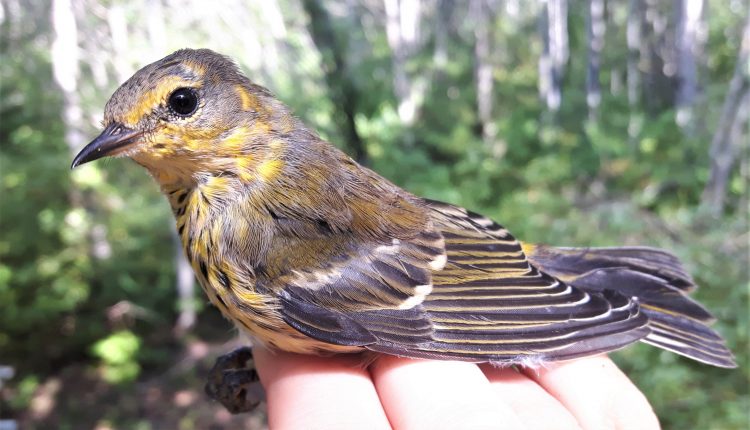 Pictured: Cape May Warbler captured this past week.

We have already banded almost three times the number of birds that we banded during Spring Migration Monitoring. This is unsurprising since there are simply more birds around to capture in the fall. After what appears to have been a successful breeding season, the forest is alive with birds that are only a couple of months old. Unfortunately many of these young birds will not survive to return in the spring as they perish due to environmental hazards such as storms and natural predators, and human-caused hazards, such as cats, light pollution, and habitat destruction.

This past week was especially busy and from August 1 to 7, we banded a whopping 833 birds. August 7 was the busiest day we have experienced in years with nearly 400 birds getting captured in the nets. Only 233 of these birds would receive bands. We do not have the manpower to process this volume of captures and we were falling too far behind to get the birds safely back into the forest in a reasonable amount of time. Late morning we decided to shut the nets and we released all of the remaining birds as we extracted them, recording only the number of birds and the species captured.

It is possible that the late evening and overnight storms have contributed to the busy mornings as birds get stuck in the area, unable to migrate at night as they normally would. They instead have been seen foraging at the station in large numbers. When they forage, they easily get captured in our nets since they are moving through the understory where our nets are located. Often we see thousands of birds migrate overhead while checking empty nets, but lately we have not seen much for overhead migration. 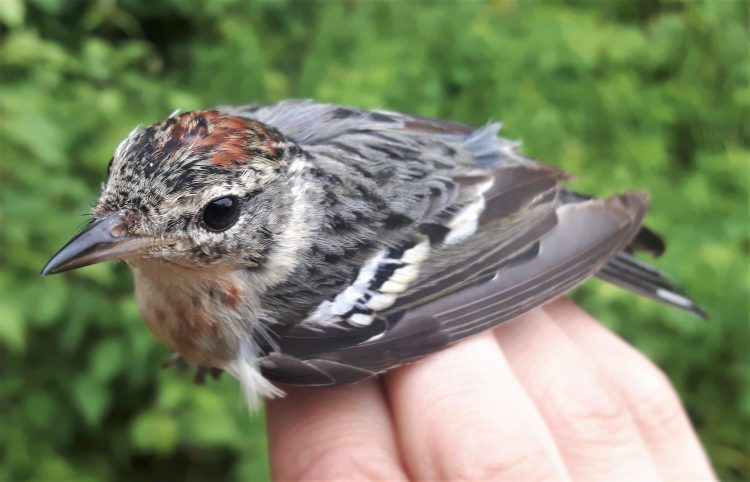 Not only have we been capturing a lot of birds, but we have also been capturing many birds of some species that we rarely see. For example, Cape May Warblers have already broken the record for bands within a fall season with 20 banded so far. The previous record stood at 15 and was set in 2010. Similarly, Bay-breasted Warblers have broken their previous record of 19 bands in a fall (2006) with 32 already banded. Meanwhile, Western Tanagers are only 2 birds away from having a record breaking season, and Rose-breasted Grosbeaks are only 4 birds away. We also banded our tenth ever Brown-headed Cowbird.

Please join us Wednesday and Saturdays from 9 to 11 AM until the end of August for drop-in tours.