Despite the often windy and sometimes raining weather hampering bird activity and frequently keeping our mist-nets closed, it has been an exciting week for the Lesser Slave Lake Bird Observatory. Tennessee Warblers continue to migrate south in large flocks and with 1,160 banded so far, we are creeping closer to banding almost double the previous fall record of 715 Tennessee Warblers banded in 2002.

In spite of the superstitions surrounding Friday the thirteenth, August 13 saw three exciting captures. First, in the early morning hours we surpassed our previous fall record of 3,966 birds banded in 2020. This is the fourth year in a row in which band totals have surpassed the previous banding record – often set just the year before. Unfortunately, we were not paying close attention and only tallied the bands at the end of the day. Consequently, I have no idea which individual bird was banded to break the record. As of August 18, we have banded 4,406 of 52 species. 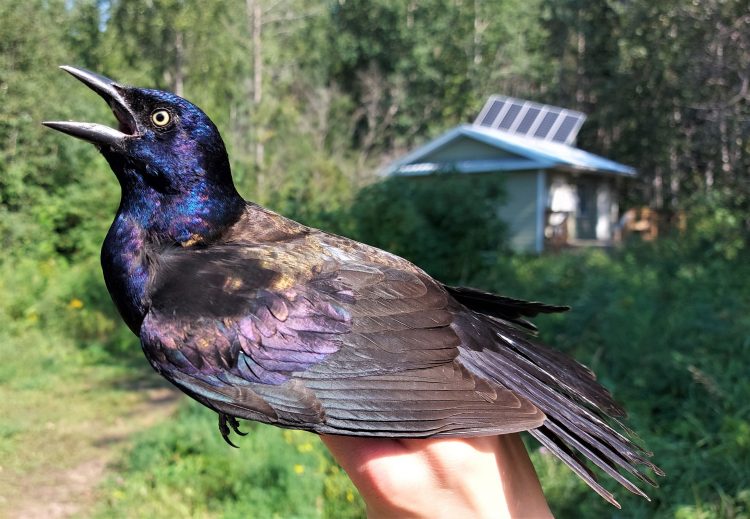 Above: Common Grackle banded August 13, 2021 – the seventh ever. Common Grackles are easiest to identify in flight by their large, wedge-shaped tail. 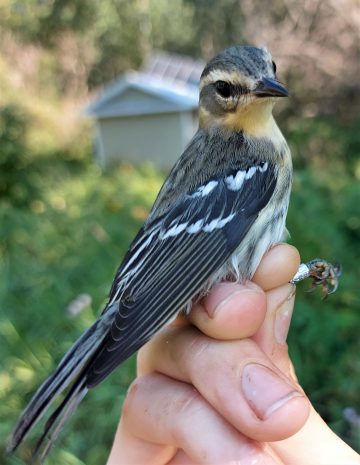 Above: The third Blackburnian Warbler banded by the LSLBO. Though they are less striking in the fall, they can be identified by extensive white in their outer tail feathers and their dark cheek.

The second exciting capture was a bird which is common in the local area, but very rarely gets captured in our nets. This bird was a Common Grackle – only the seventh we have ever banded. At least a few grackles are seen flying overhead almost daily during migration, but they rarely fly beneath the canopy where they can get captured in our nets. Even when they do fly through the forest, they are unlikely to be captured. This is because mist-nets come in various sizes, each having different sized holes in which birds get caught. The nets we use in the migration monitoring station focus on small songbirds and are capable of capturing birds as large as American Robins, but anything larger than a robin will frequently just bounce out of the net. Common Grackles are one of these species that end up bouncing out of the net before we have a chance to extract them because they are too big. As a result, the last Common Grackles were banded back in 2014.

The third exciting capture was a bird that we not only rarely capture, but we also rarely see foraging through the forest or flying overhead. This bird was a Blackburnian Warbler. Like Nashville Warblers, we are somewhat out of this species’ typical breeding range which extends from the Maritimes to west only as far as around Saskatoon, though there appear to be small breeding populations within Northern Alberta. This was only the third Blackburnian Warbler we have captured from the over 98,000 birds we have banded to date.

Tours of the LSLBO occur every Wednesday and Saturday until the end of August (unless it is raining or too windy). Space is limited, so please call ahead to reserve your spot: (780) 849-8240.