Things continue to slow down for our Fall Migration Monitoring program with only 169 birds banded in the last week. The weather has not been cooperating with rainy days becoming windy days – preventing mist-netting to the extent that only one day this week achieved full net hours. Not only has the weather been impacting our capture rates, it has also impacted our observations and little overhead migration or foraging was recorded. 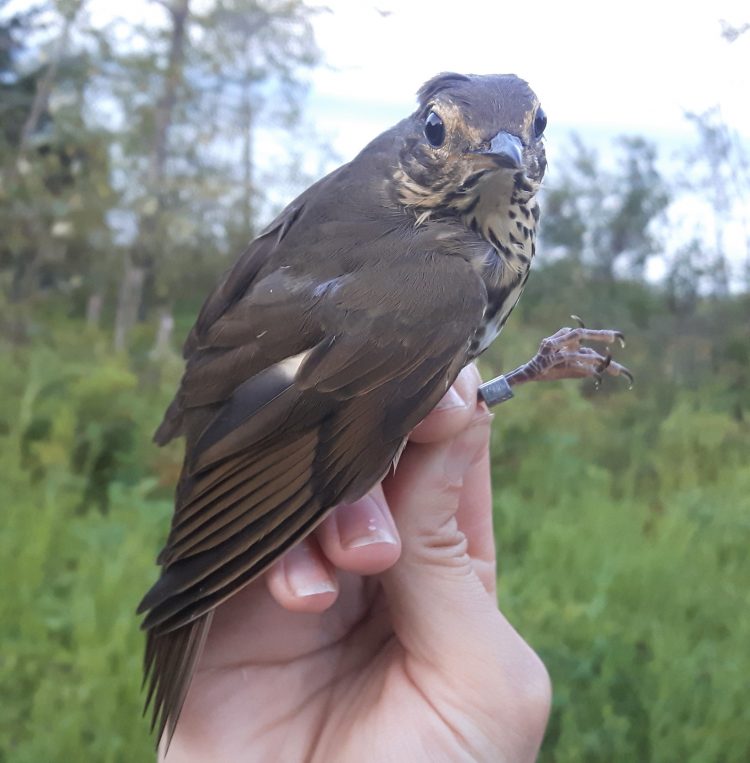 Over a quarter of the birds banded (50) this week were Swainson’s Thrush. They are one of the few species in which we are still recapturing individuals that bred and hatched locally. The remaining adults are growing a fresh set of feathers, replacing their old set in what is called the ‘basic’ molt. Meanwhile, juveniles are completing their ‘formative’ molt. In this molt, body feathers that the young thrush grew on the nest are replaced; tan streaking on otherwise olive feathers is exchanged for completely olive feathers. These replaced tan spots were an adaptation to mimic sun dappling on the forest floor, where young thrush spend most of their time. This is a similar adaptation that deer fawns exhibit to help them camouflage. By the end of their formative molt, young Swainson’s Thrush look nearly identical to much older adults. 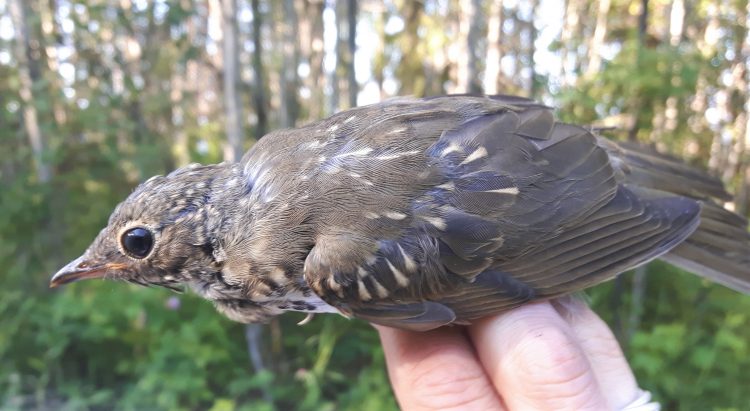 Across our 26 years of Fall Migration Monitoring, the fewest Swainson’s Thrush banded was 43 (1996), while the busiest season was just last year with 362. On average, we band 154 in a typical fall monitoring period. We are already well above this average with 264 banded this year, making Swainson’s Thrush the third most banded species. Amazingly, the most Swainson’s Thrush we have ever banded on a single day was on May 19, 2012 when 226 birds out of 338 banded were Swainson’s Thrush.

You may be wondering how you have never seen this common bird before. This species is closely related to the American Robin, which you have likely seen foraging on the ground in open fields. Swainson’s Thrush also spend much of their time on the ground, but they prefer the thick understory of the forest, making them difficult to spot. They are well adapted to the understory’s low light with their large eyes and dull colouring. Their secretive nature is part of the reason why we employ mist-netting to estimate migration trends. If we did not have the nets, we too would record very few of these birds moving through.

When breeding, Swainson’s Thrush have small territories, allowing them to be abundant across the landscape. Unlike many species where females act coy, males play hard to get and initially defend their territories from females. After several days of the female’s persistence, the male accepts the female and the pair mate. Since females prefer to breed in the same area as previous seasons, pairs often breed together for several years, but this bonding process is repeated annually.

To learn more about birds and our research, join us on Wednesdays and Saturdays from 9 to 11 AM for bird observatory drop-in tours until the end of August (weather permitting).