The wind has continued to plague our monitoring operations again this week, but conditions are improving. Unlike last week, where we were only able to open the mist-nets for 52% of the monitoring period, this week we have achieved 68% of our netting coverage. Although we have had the nets open for longer, we have only banded 162 birds compared to last week’s 169 as things seem to be slowing down overall. With 91 birds captured on August 29, we may be seeing the start of a second busy period. Fall is officially upon us with Orange-crowned Warblers, American Pipits, and a few Canada Geese migrating through, but the majority of our observations continue to be Myrtle Warblers.

With the windy conditions that we have been experiencing lately, it is a wonder that birds can migrate at all. Most songbird species do the majority of their migrations at high altitudes overnight. Under the cover of darkness, they can find helpful atmospheric conditions and fewer risks from predators. Likewise, flying at night allows for more of the daytime to be spent foraging and fattening up for the next night’s travels. 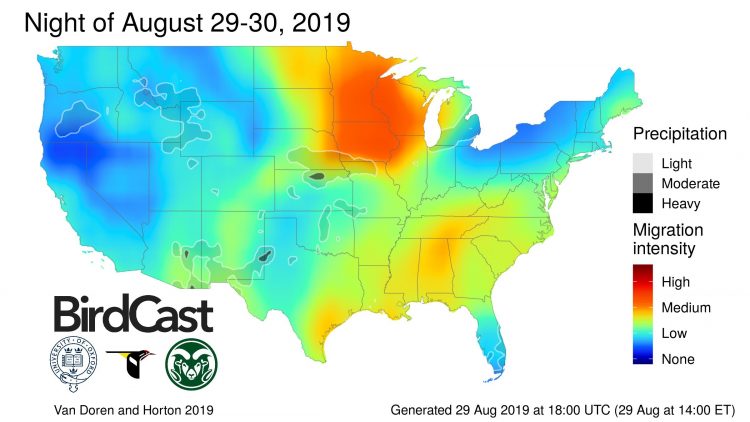 Pictured: BirdCast migration activity forecast for the continental United States tonight using 23 years of radar observations. (http://birdcast.info/). To my knowledge, there is currently no equivalent within Canada.

Some studies using Doppler weather radar to detect large flocks of migratory birds have observed songbirds varying their altitudes up to an astounding 3 km from the earth’s surface. Within this range, they will fly at different heights based partly on differences in wind conditions. In the morning, many species of birds continue their nighttime flights, but continue to migrate at much lower altitudes, near the earth’s surface. Wind speeds are often lower near the surface of the earth due to friction between the air and the ground. Birds flying this low are no longer detectable on weather radars and relatively little is understood about their behaviour during these morning flights. 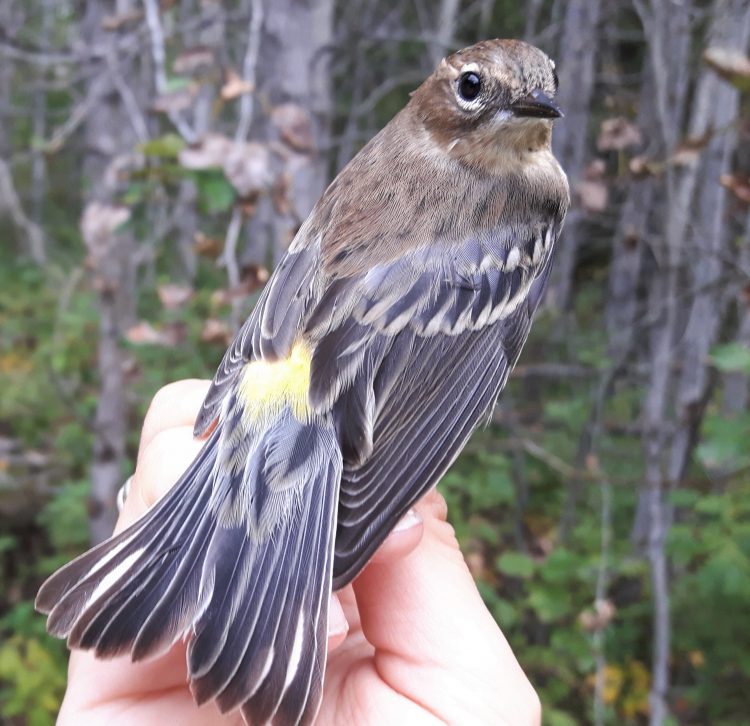 Pictured: One of the many Myrtle Warblers captured this week.

There is evidence to suggest, especially on the eastern coast of North America, that morning flights play a pivotal role in correcting wind drift, which describes when migrating birds are blown off course. Often, this is done by trade winds that tend to blow from the west to the east. Drift corrections involving western and sometimes northern flights have been documented during fall morning flights at eastern bird observatories where birds that get blown too far east are at risk of ending up over the Atlantic Ocean. These morning corrections documented in some species, including Myrtle Warblers, may be a necessary aspect of bird’s nocturnal migrations in order to remain on course and over land. However, little is known about drift corrections inland and especially in the west since the risk associated with drift is lower since there is usually somewhere to land and forage. Other studies and our own observations suggest that the typical response to unfavourable winds near the ground is to simply wait and do some foraging until conditions improve.