Over the past week, migration has slowly picked up. We are seeing Tennessee warbler and myrtle warbler moving overhead in increasing numbers every morning. Still nothing like we expect to see this time of year, but it’s an improvement from last week. Other species that are steadily migrating are western tanager (in surprisingly good numbers) and well as Canada and mourning warbler and alder flycatcher. Banding has continued to be very slow, we have banded around 550 birds this fall as compared to our total of about 900 this time last year. All the hot weather hasn’t been helping our cause. We will catch a few birds first thing while it is still cool and then nothing once the sun crests the trees. 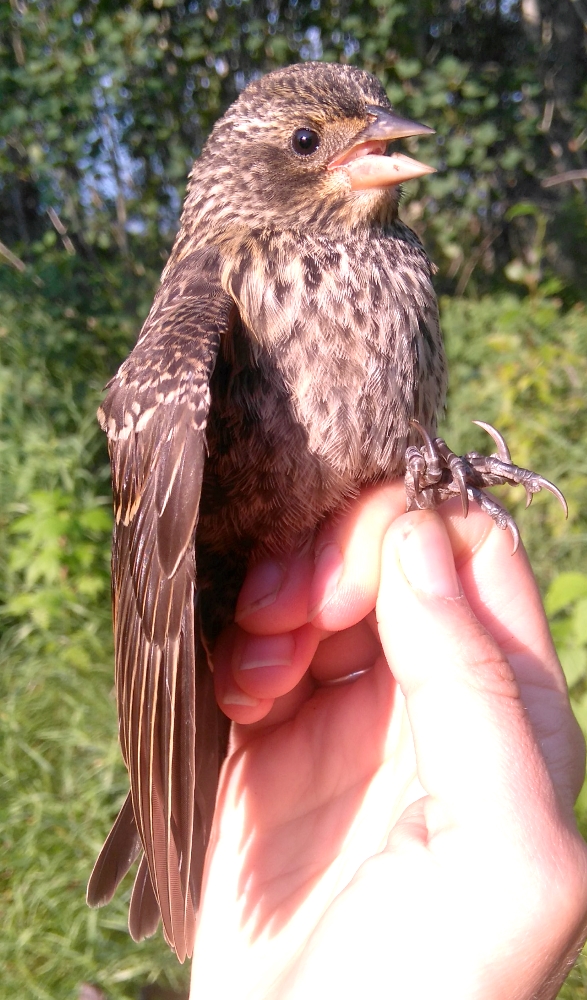 Birds simply do not migrate in the heat. Go jogging on a hot day while wearing a down jacket and you will quickly understand why not. Feathers are extraordinary insulators and if a bird were to try migrating through the heat of the day it would rapidly become exhausted and dehydrated. To combat over-heating, most birds migrate at night or on overcast days.

Migrating at night presents its own challenges, most obviously ‘how to navigate?’ Birds use multiple cues including the stars and moon, the setting or rising sun and the earth’s magnetic field to point themselves in the right direction. Their use of light creates a problem for birds in the modern world. All their instinctual programming, programming that enables them to complete migrations of over 5000 km twice a year, tells them a couple big things about light. One, you cannot hit light. No matter how far you fly you will not crash into a star, the moon or the sun. Two, light sources are predictable – the sun rises in the east and sets in the west, this won’t change. Then we created light. Light that turns on and off. Light that pops up in all sorts of random places. Light that can be hit.

If you have ever watched moths flying around a light you have probably thought ‘why are moths so darn dumb? Why do they keep bashing themselves into that light?’ Birds and moths are both operating on the same rules about light. What the moth is doing is trying to keep the brightest point on the horizon to one side of it depending which direction it wants to fly. If it wants to fly north in the evening it keeps the light to its left because that is where the setting sun would be. If an artificial light is brighter than the natural horizon the moth ends up circling to keep the light on its left. Eventually it circles and circles until it hits the light and then because it is so close to that much light it can’t reorient itself and get out of the glow. Bash, bash, bash.

This is what happens to birds migrating past large cities. The city becomes the brightest point on the horizon and birds start circling it until they are so lost in all the light they can’t escape. And just like the moth they eventually bash into a brightly lit window. I urge everyone, especially during migration season to turn the lights out at night. Turn out office lights and unnecessary porch lights. Let the stars, the moon and the rising or setting sun be the brightest.