In North America, bird banding stations are typically much busier during the fall than they are in the spring, as fall migration monitoring runs for a longer duration and captures large numbers of young birds that hatched just a few months previously. For migratory birds especially, population numbers reach an annual peak around this time as the year’s young are born and leave their nests, and then plummet as they confront the rigours of their first flight south. Once that first migration has been successfully navigated a bird’s odds of survival will increase; but overall the number of birds that leave the boreal forest in the fall is much higher than the number that return the following spring. 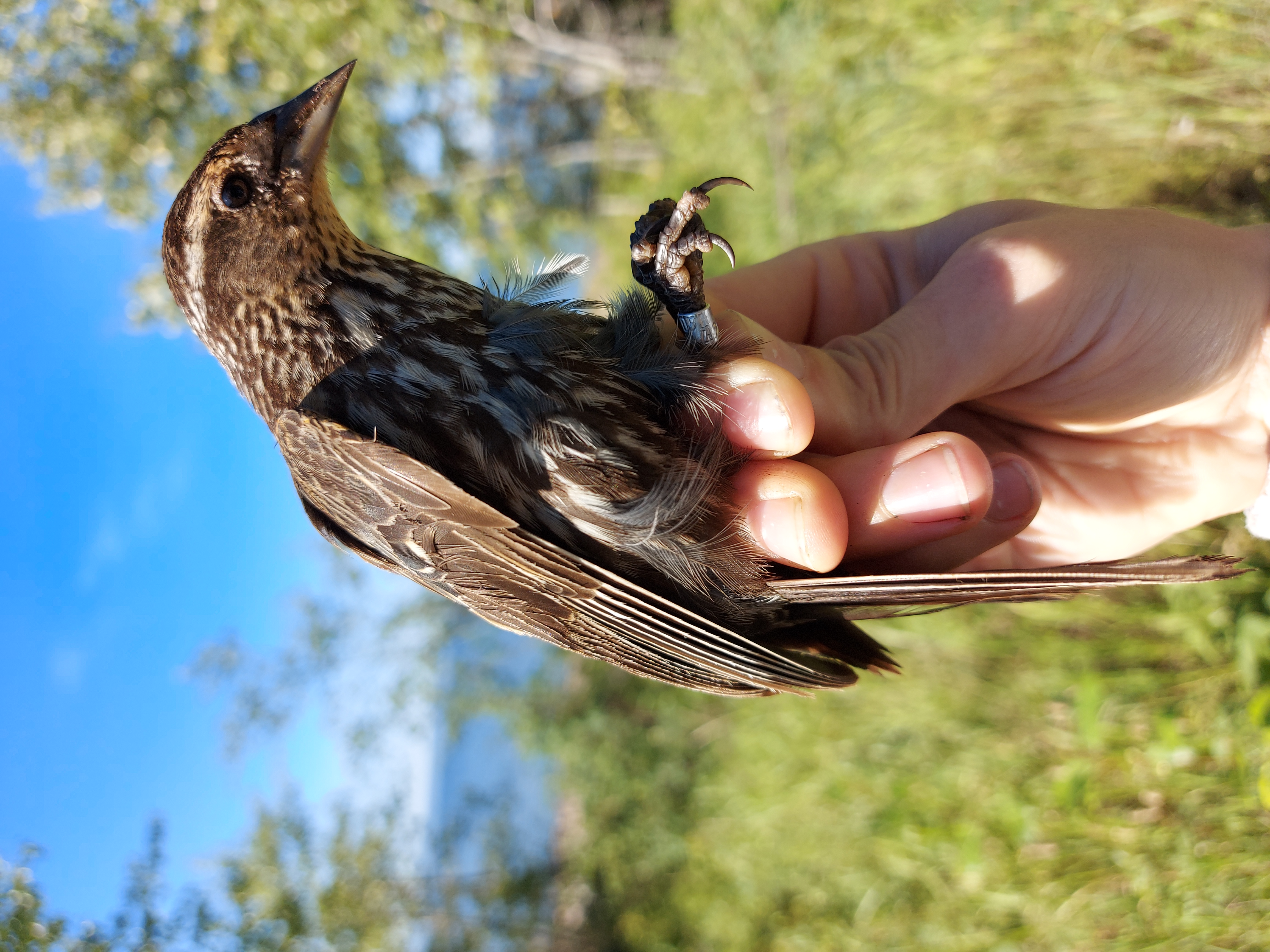 Above: Ninth ever Red-winged Blackbird banded by the LSLBO – a female that had attempted to breed this summer and was likely a full one year old.

This year, LSLBO’s fall has already been astoundingly productive. As of August 11, less than halfway through the season, we have banded 3,786 birds of 49 species, compared to 3,966 banded during 2020’s entire fall! With so many birds being captured, it’s no surprise that we have banded record-high numbers of several species. For many we are breaking records set in 2019 or 2020, which were our previous busiest seasons: this is the case for Black-and-white Warblers, Canada Warblers, and Northern Waterthrushes, as well as Rose-breasted Grosbeaks and Western Tanagers. For other species though, banding totals have not been this high for many years. Tennessee Warblers in particular have been a stand-out – we have banded 1,042 so far, five times the annual average. The last time we saw totals close to this was in 2002, when 715 Tennessee Warblers were banded. 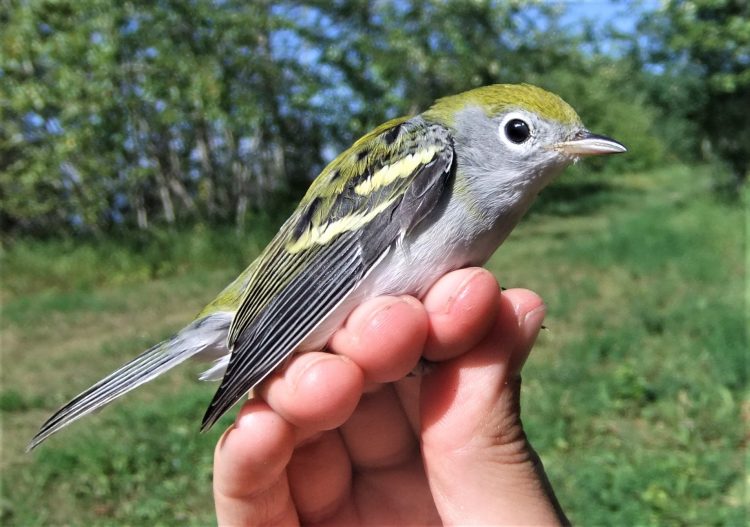 Above: Migrating Chestnut-sided Warbler captured on August 8, 2021 – the 24th banded across LSLBO programs.

We have also seen some very special individuals pass through the station over the past few days. On August 9 we captured the ninth-ever Red-winged Blackbird banded by LSLBO! While we observe this species frequently, they are rarely captured. We also banded a Chestnut-sided Warbler, a species with an easterly range that is not common around Slave Lake. A single one was banded in 2019, but before that the last time any were captured was in 2005.

With so many many birds being banded, it begs the question: why have we been experiencing such busy fall seasons? Certainly with our three busiest falls in a row (in 2019, 2020, and now 2021), it seems like more than a coincidence. One possibility is that the forest fires that affected the region in 2019 have changed local migration behaviour in a way that sees more birds passing by the LSLBO low enough to be captured in our nets. But really, we just do not know. If nothing else, these annual variations in our banding totals highlight the importance of continuing LSLBO’s long-term migration monitoring efforts, so that we can help build a more accurate picture of bird population health overall.

If you are interested in visiting our monitoring station, tours occur every Wednesday and Saturday unless it is raining or too windy. Space is limited, so please call ahead to reserve your spot: (780) 849-8240.

Team Tanager assembled for Birdathon yesterday, but their results will not be available until Team Birders in the Park have had their chance for a big day this weekend. If you want some hints on how Team Tanager's day went, check out our weekly report, featuring some interesting recaptures! www.lslbo.org/weekly-banding-reports/may-12-18-2022/There is still time to donate to our teams:TEAM TANAGER: www.canadahelps.org/en/charities/bird-studies-canada/p2p/birdathon22/team/tanager/TEAM BIRDERS IN THE PARK: www.canadahelps.org/en/charities/bird-studies-canada/p2p/birdathon22/page/birders-in-the-park/ ... See MoreSee Less
View on Facebook
· Share

We are so excited that we can get together again for our 25th Annual Songbird Festival! SATURDAY, MAY 28TH (6:30 am to 1:30 pm)Join us for a wonderful day of birding and family fun including: our free Neal Knoot Pancake Breakfast, guided birding walks (depart 7 & 8 am) , bus tours of the Lesser Slave Lake Bird Observatory (depart hourly starting at 7 am), bird house/feeder building, nature workshops, and lots of hands-on activities for all ages. Can't wait to see everyone again!Plus join us on SUNDAY, MAY 29th for our 16th Annual Bird Run/Walk (5K/10K) fundraiser along our beautiful trails! Check out the full program schedule: www.lslbo.org/education/songbird-festival/ ... See MoreSee Less
View on Facebook
· Share

Look at this throwback to Team Thrasher's Ken Orich and Wayne Bowles getting ready for their 2014 Great Canadian Birdathon (at the time, the "Baillie Birdathon")! To learn what the Birdathon is and what's changed since 2014: www.lslbo.org/weekly-banding-reports/may-5-11-2022/To donate to our 2022 Birdathon Teams:TEAM TANAGER: www.canadahelps.org/en/charities/bird-studies-canada/p2p/birdathon22/team/tanager/TEAM BIRDERS IN THE PARK: www.canadahelps.org/en/charities/bird-studies-canada/p2p/birdathon22/page/birders-in-the-park/ ... See MoreSee Less
View on Facebook
· Share