As surprising as it may sound, we have nearly completed our first week of Fall Migration Monitoring at the LSLBO after starting operations on July 12. Although there is still ample evidence of active breeding in the area, a trickle has begun of birds heading south for the winter. We have already banded nearly 250 birds from 29 species, with the majority of bands from warbler species, including Yellow Warblers, Tennessee Warblers, American Redstarts, and Myrtle Warblers.

Recently we were notified that one of the birds we banded during last fall was found again during his international travels. Although we recapture many of our own bands since birds often return to the same area to breed, having one of the birds we banded show up somewhere else is very rare. For example, we have banded nearly 14,000 Myrtle Warblers and only 2 of them have shown up somewhere else. 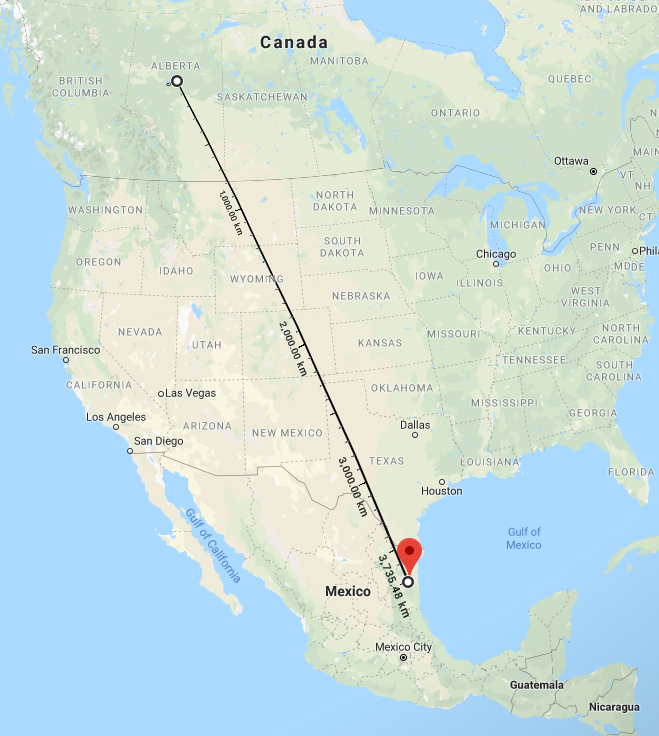 Pictured: Approximate location of Lesser Slave Lake Bird Observatory (banded Sept. 15, 2018) and recovery location (Nov. 20, 2018) of the Sharp-shinned Hawk with straight-line distance. This hawk undoubtedly travelled a farther distance since it was unlikely to take such a direct path.

The recently recovered band of ours was a young male Sharp-shinned Hawk that was banded on September 15, 2018. Despite being less than a year old, this bird would travel over 3,700 km before being seen near Abasolo, Tamaulipas, Mexico on November 30, 2018.

Due to their large size (compared to the songbirds we typically band) and charismatic nature, Sharp-shinned Hawks are our second most recovered species. This is our 5th recovery of a Sharp-shinned Hawk – despite having only banded 725 – and it is also the farthest from our station that one has been found again. Sadly all of our Sharp-shinned Hawk recoveries were of dead birds, and this recovery is no exception as this hawk was shot dead in Mexico. 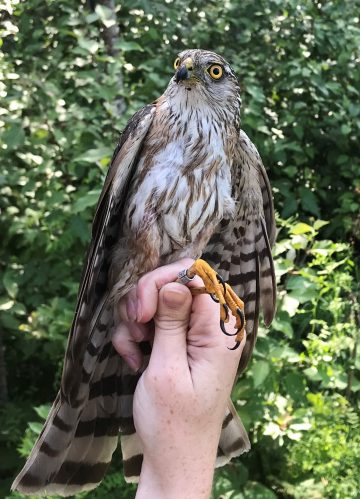 Although we do not know the circumstances that led to this specific hawk being shot, there is a long and dark history across North America of persecuting raptors. Historically raptors were shot by farmers, hunters, and conservationists alike to protect small livestock and poultry, for sport, to protect songbirds and game animals, or to contribute to specimen collections. These efforts to remove raptors from the landscape led to population declines in the early 20th century. Eventually some raptors, such as Bald Eagles and Osprey, would capture the public’s imagination and received protections. Sharp-shinned Hawks, however, remained unprotected until the infamous pesticide DDT would decimate raptor populations and refocus conservation efforts on the protection of all hawk species and on the threat of environmental contaminants.

Today, the biggest human threats to the Sharp-shinned Hawk remain an ever increasing number of environmental contaminants (many of which we do not understand the potential impacts on ecosystems), land-use changes that decrease suitable habitat, and persecution returning as raptor populations continue to rebound and human-hawk conflicts become more common.