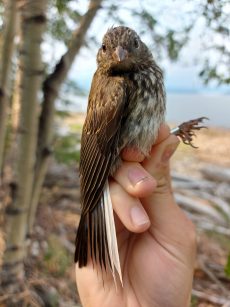 Believe it or not, fall migration monitoring for the LSLBO is underway!  Already we have banded 599 birds from 35 species. Although overhead migration has been relatively slow, Tree Swallows, Myrtle Warblers and Yellow Warblers are already on the move. This week also saw the second to last period of the MAPS (Monitoring Avian Productivity and Survivorship) program, which focuses on locally breeding birds. Our nets are catching some older birds, who have begun their molting process for a fresh set of feathers needed for their long journey. Even more commonly captured are birds in juvenile plumage and some fledglings.

This week, we were excited to capture two juvenile Dark-eyed Juncos! Although they may not sound very exotic, they do not breed around the station and we have captured less than a dozen juncos in their streaky juvenile plumage. In fact, the last junco that we have captured so young was in 2004.

Slate-colored Juncos can be identified by their distinctive white outer tail feathers, grey or brown-grey colouring and, a clean white belly and a light-pink coloured bill. These sharp looking adults differ greatly from the juveniles. The juveniles will typically have a streaky appearance on their breast rather than white, and their bills will appear to be more yellow than pink 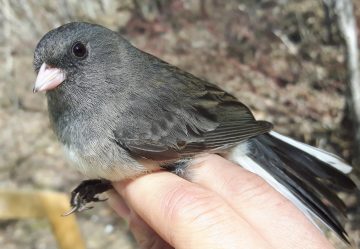 Our local Slate-colored Juncos typically nest in thick, black spruce bog-like habitats. They will usually build a grassy cup-shaped nest on the ground with an overhang of shrubbery and trees as protection. Juncos will commonly visit bird feeders that include a variety seed mix, especially in colder temperatures, allowing a few juncos to overwinter even as far north as Slave Lake. This species is one of the first we see migrating in the spring-time, usually making an appearance in early April. They are also amongst the last to leave in the fall with most birds moving farther south to overwinter in the United States.

Although the station remains closed to the general public due to COVID, we will be starting up special tours of the LSLBO this summer. You will need to pre-register, so contact the Boreal Centre for Bird Conservation to find out when the next tour is taking place.