This was the second week of fall migration monitoring for the Lesser Slave Lake Bird Observatory. We are actively observing songbirds as they leave the breeding grounds on an arduous journey with the reward of a warm, insect rich winter spent in southern climes. Despite the slow start to bird movements last week, this week’s nicer weather has allowed songbirds to get on the move. 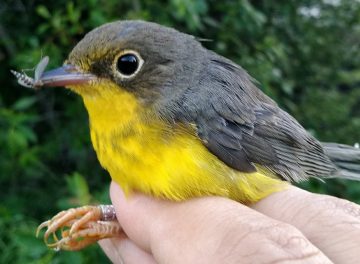 Pictured (above): Young Canada Warbler captured while trying to fatten up for the journey south.

Among many other warbler species, we have also been banding plenty of Canada Warblers. Canada Warblers are interesting in that they are often one of the last species to arrive and the first to depart. We did not see our first Canada Warbler this year until May 24, but many of our local Canada Warblers seem to already be gone, having flown all the way from Columbia to spend less than two months on the breeding grounds. In late September to early October they will complete their 7,000 km journey south and arrive in South America. 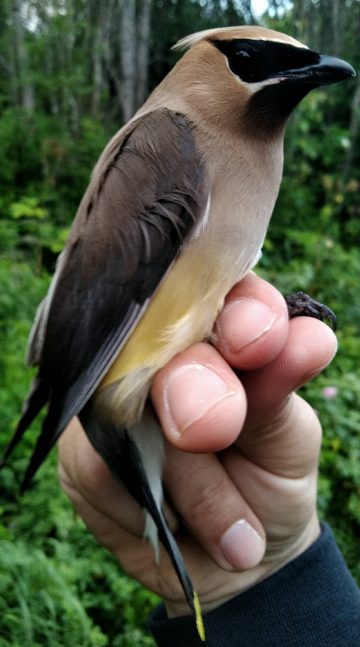 In addition to fall migration monitoring, we continue to run our program that assesses breeding activity. One of the few species still in the middle stages of breeding is the Cedar Waxwing. Similar to Canada Warblers, Cedar Waxwings arrive late to the breeding grounds. Unlike Canada Warblers who are already heading south, some waxwing females are still sitting on nestlings. Since Cedar Waxwings can be found in southern Alberta during the winter months and they do not have nearly as far to go as Canada Warblers, they can take their time breeding to take advantage of the berries that make up most of their diet. Be sure to leave some berries for the waxwings if you find yourself foraging in the coming weeks.

Pictured (right): Cedar Waxwing. Although captured during the fall migration monitoring program, this bird is still actively trying to raise a nest of chicks and won’t be migrating for some time.