We are a couple weeks into fall migration monitoring and only one round away from completing our MAPS banding program for the year. If you do not recall from previous articles, MAPS is our summer banding program that is less intensive than the migration monitoring and focuses on locally breeding birds. We have four sites that are each run six times in ten day intervals. Our last round of MAPS, which runs over four days as early as possible between July 30 and Aug 8, is always a stressful one for us.

By this time period the majority of young birds of most species are migrating and the adult birds are following suit which potentially adds up to a lot of birds. The migration station alone can pull off days with over a hundred birds during the first half of August, and our MAPS stations, although normally not terribly busy, can also become inundated with migrating birds as opposed to just the breeders during the last round.

And things are gearing up to get busier. Over the past week we have seen a steady increase in migrating birds every day. White-throated sparrow, Swainson’s thrush, myrtle warbler, Canada warbler and ovenbird make up the top banded species at the moment and they also make up a good chunk of the observed birds. Other warblers are starting to join the migration train though, American redstart, yellow warbler, Tennessee warbler and black-and-white warbler have all been seen in increasing numbers and sparrow species like swamp, Lincoln’s and clay-coloured and making their presence known.

Despite this time of year being potentially very busy, it is one of my favourite times of year. Young birds are not only very cute, they present a little bit of a challenge. After ten years banding birds, there are many things that get very easy, especially bird identification. Which is good. Correctly identifying birds is by far the most important skill to have for a person doing migration monitoring. But come fall, even for the most experienced bander, there are still the occasional birds that require more than a cursory glance to determine the species. It can be a lot of fun to have to consult our ‘birding bible’ (Identification Guide to North American Birds by Peter Pyle) and take a series of measurements to verify species. It is not like we ever catch a bird that we have no idea what it is, but when they are really young there are some look-alike species like Lincoln’s and swamp sparrow, song and white-throated sparrow or palm, Cape May and myrtle warbler. 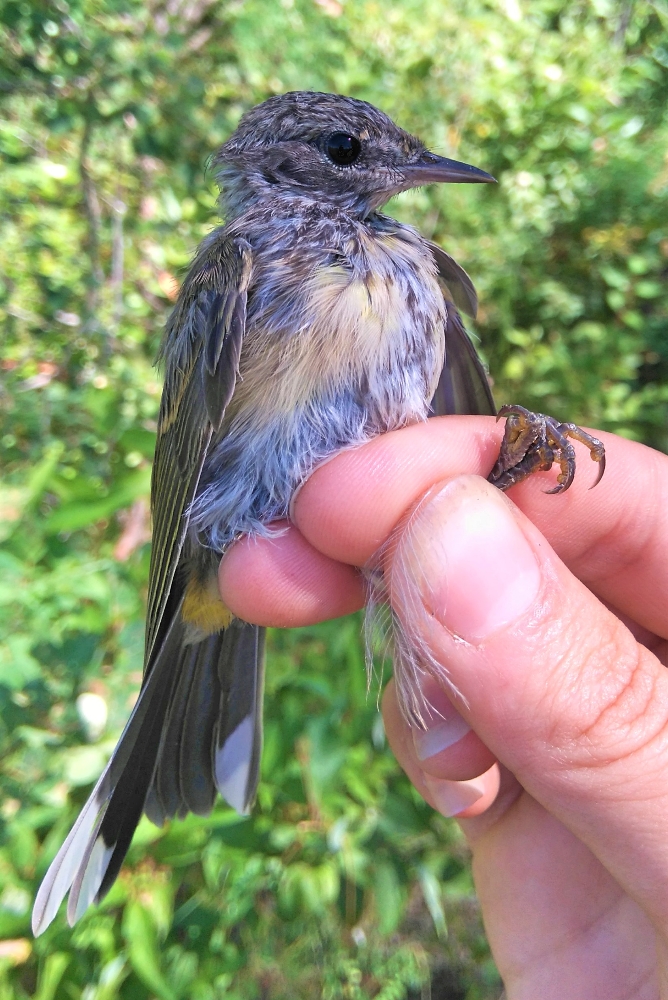 Birds also don’t sing in the fall so identifying them not in the hand is even more of a challenge. During the spring and fall we don’t have to see a bird to count it. We can hear it singing and because we know the songs of all the species in this area we can record it on our tally. But in the fall they are wearing their drab winter plumage or juvenile plumage and they are only making call notes which all sound quite similar. So again, a little more brain work, which I, for one, think is a fun time.