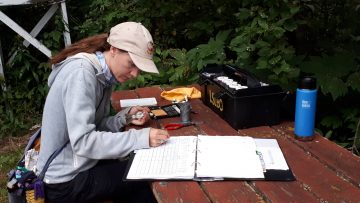 On August 1 the LSLBO’s 2021 Monitoring Avian Productivity and Survivorship (MAPS) program finished. MAPS is an international banding initiative in which sites of 10 mist-nets are visited once every 10 days over the breeding season. We operate four of these sites.

When we band birds, we estimate their age – whether they were born this year or last year. These age estimates are crucial to understanding how many birds are surviving between years, as well as how many young are produced yearly (the namesake of MAPS). This can provide clues to what might be causing the population changes detected through our migration monitoring programs.

Let’s look at how 2021 compares to our 26 other years of MAPS monitoring. This was by far the busiest season on record. We banded an unofficial 832 birds from 31 species – well above the yearly MAPS average of 237 birds from 25 species. Furthermore, this is well above the previous record breaking year of 505 birds banded during MAPS 2020.

While MAPS focuses on local breeders, the last two times we run it tend to catch primarily migrating birds. It is due mostly to capturing these migrants in the last round that our banding totals are so high. In fact, for three of the four stations in the last round, we could not safely run all 10 nets and keep up, so some nets had to remain closed to keep captures at a manageable level. 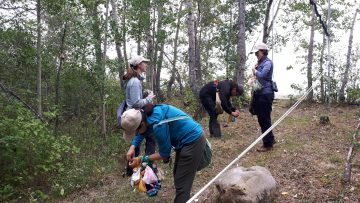 All these migrating birds did not confine themselves to the MAPS sites and Fall Migration Monitoring was also demanding following our single busiest day ever of 509 birds banded on July 28. Between July 29 and August 4, we banded 1,460 birds, averaging 208 birds per day. This is exceptionally busy. For context, last year we were able to break our fall banding record while banding an average of 49 birds per day. Although we are only 24 days into the 81 days we expect to run Fall Migration Monitoring, with a total 2,936 birds banded, we have already passed the average of 2,160 birds per fall monitoring season. Tennessee warblers make up the bulk of captures and with 853 banded, we have already surpassed their previous record of 715 in 2002.

We are once again running tours Wednesdays and Saturdays. Pre-registration is required and space is limited. Call the Boreal Centre for Bird Conservation at 780-849-8240 to learn more.