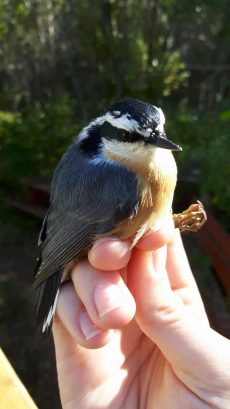 Perhaps you are familiar with the nasally weh-weh-weh of a red-breasted nuthatch whisking up a tree trunk. They’re quite small and, in my humble opinion, shaped similarly to a thumb. We often get these fellows at the observatory. They don’t usually migrate, but if food becomes scarce they might all move at once. In September of 2009, 129 red-breasted nuthatches passed through the Lesser Slave Lake Bird Observatory in a single day!

On the other hand, we have their more elusive white-breasted counterpart. They’re like much bigger thumbs with a faster weh-eh-eh-eh. By no means are white-breasted nuthatches uncommon, but we don’t usually see them at the observatory. In fact, the last time we banded one was in 2014, for a total of eleven since 1994—until now.

That’s right, during our last MAPS breeding bird banding period, we banded not one, but two white-breasted nuthatches!

They were banded as an adult female and an older fledgling, and with a third singing in the trees above my head, dare I say we managed to catch ourselves a family. Also exciting to note is that this is the first time we’ve banded white-breasted nuthatches with evidence that they are actively breeding in the area! 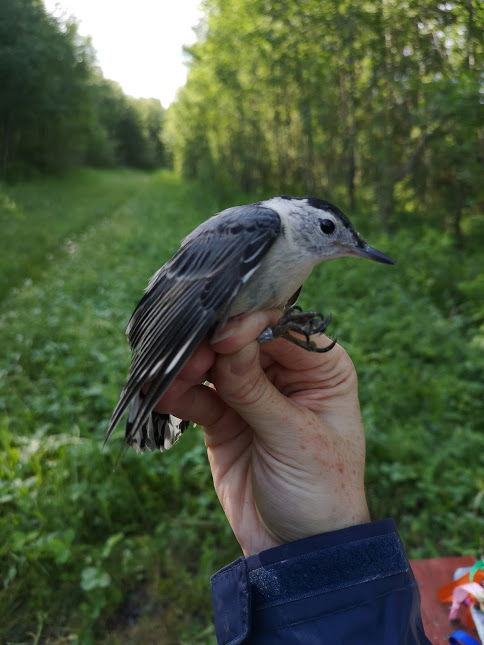 Males and females don’t look strikingly different from each other like many warblers. The key difference is in the cap. Males will have a black cap, whereas a female’s is dark grey. Both contrast with the lighter grey of their backs and wings, so it may not be immediately obvious if you see one on a tree trunk!

Like the red-breasted, white-breasted nuthatches are cavity nesters. They prefer natural tree cavities or those already excavated by woodpeckers, such as those found in dead trees. That’s right, those bald trees you see peeking above the canopy may be home to a few white-breasted nuthatches! They build a nest cup out of fine grass, feathers and other soft material. They might be tempted to use a nest box, and will return to their preferred real estate in following years.

With this in mind, we hope there is a greater likelihood of seeing this family again in the future. Maybe you’ll even happen across the fledgling as it goes searching for territory of its own!