There is so much variety in the size and coloration of birds, that it comes as no surprise their beaks are no different. From the long, thin needle of a hummingbird, to the flat bill of a duck, every bird has a beak shaped conveniently for their preferred diets. Of the forty-three species we have banded at the lab so far this fall migration season, there are several which provide great examples of the variety we see every day.

Grosbeaks are one of the more obvious examples. Their beaks are thick and triangular, and can bite down with as much power as one would expect with a beak that size. Unsurprisingly, species like the Rose-Breasted Grosbeak take full advantage of this power during fall migration to crack down on nuts and seeds, from milkweed to sunflowers. They also enjoy elderberries and raspberries, among other fruits. During spring and summer, however, they are more likely to prowl branches for crunchy insects like crickets and beetles that might be clinging to the foliage. 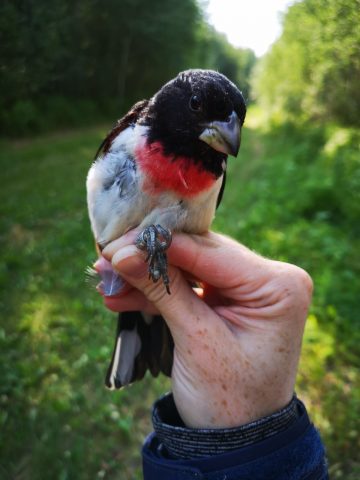 Like the Rose-Breasted Grosbeak, Red-Eyed Vireos prefer insects in the summer, and incorporate more fruit during the fall migration. They switch almost exclusively to fruit on their wintering grounds in South America. Though their diets might be similar, Red-Eyed Vireos go about eating a little differently. Their beaks are much thinner than a grosbeak’s, with a sharp little hook at the very tip. Since they especially like fat caterpillars, which make up half their summer diet, this allows them to perch with their meal underfoot, tearing it into bite-sized pieces rather than eating it whole like they might smaller prey. 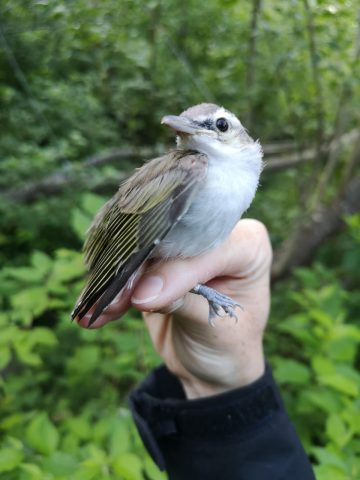 Smaller, daintier birds like most warblers do not have the beaks for tearing apart large caterpillars. They will go for smaller insects or larvae that they can swallow whole, like mosquitoes and leafhoppers. Even within the warbler family, there is variety in beak shape. Take for instance the American Redstart. Compared to the small, pointed beak of a Myrtle or Nashville warbler, the American Redstart has a flatter, wider shape, more reminiscent of a flycatcher than a warbler. This is because they compete with flycatchers in snapping up airborne prey. They will pluck insects from leaves and branches much like the grosbeaks, vireos and other warblers, but they are appropriately equipped to snatch flies and moths spooked off their perches by a flash of their tails and wings.

This is just the tip of the iceberg. There are as many different beak shapes and uses as there are birds. Some extravagant, others more subtle, but each are used to their fullest potential. The next time you spot a bird, what can you tell of its diet by the shape of its beak?

So far this season, the LSLBO banding station has banded nine Rose-breasted Grosbeaks, which is a very low total compared to the number of warblers the station typically sees. At the moment the most common bird is the Tennessee Warbler, with 393 banded in total. Amazingly, 239 of them were captured in just a single day – July 28th, the station’s busiest day ever! 509 birds were banded of 25 species, far exceeding the previous busiest day’s total of 363 birds. This incredible day brings our season’s total to 1,478 birds banded of 43 species, with many more to come this fall!

Team Tanager assembled for Birdathon yesterday, but their results will not be available until Team Birders in the Park have had their chance for a big day this weekend. If you want some hints on how Team Tanager's day went, check out our weekly report, featuring some interesting recaptures! www.lslbo.org/weekly-banding-reports/may-12-18-2022/There is still time to donate to our teams:TEAM TANAGER: www.canadahelps.org/en/charities/bird-studies-canada/p2p/birdathon22/team/tanager/TEAM BIRDERS IN THE PARK: www.canadahelps.org/en/charities/bird-studies-canada/p2p/birdathon22/page/birders-in-the-park/ ... See MoreSee Less
View on Facebook
· Share

We are so excited that we can get together again for our 25th Annual Songbird Festival! SATURDAY, MAY 28TH (6:30 am to 1:30 pm)Join us for a wonderful day of birding and family fun including: our free Neal Knoot Pancake Breakfast, guided birding walks (depart 7 & 8 am) , bus tours of the Lesser Slave Lake Bird Observatory (depart hourly starting at 7 am), bird house/feeder building, nature workshops, and lots of hands-on activities for all ages. Can't wait to see everyone again!Plus join us on SUNDAY, MAY 29th for our 16th Annual Bird Run/Walk (5K/10K) fundraiser along our beautiful trails! Check out the full program schedule: www.lslbo.org/education/songbird-festival/ ... See MoreSee Less
View on Facebook
· Share

Look at this throwback to Team Thrasher's Ken Orich and Wayne Bowles getting ready for their 2014 Great Canadian Birdathon (at the time, the "Baillie Birdathon")! To learn what the Birdathon is and what's changed since 2014: www.lslbo.org/weekly-banding-reports/may-5-11-2022/To donate to our 2022 Birdathon Teams:TEAM TANAGER: www.canadahelps.org/en/charities/bird-studies-canada/p2p/birdathon22/team/tanager/TEAM BIRDERS IN THE PARK: www.canadahelps.org/en/charities/bird-studies-canada/p2p/birdathon22/page/birders-in-the-park/ ... See MoreSee Less
View on Facebook
· Share