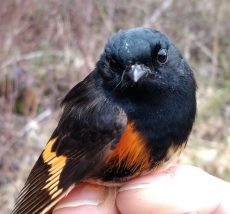 At migration monitoring stations like the LSLBO, birds that are captured are tallied in one of two categories each day: birds that were banded, and birds that were recaptured. A banded bird is a one that is captured and banded that day, while recaptured birds are those that are found already banded, having been previously captured either at LSLBO or at another banding station. In general we processes very few recaptured birds during the migration monitoring program, as migrant birds that are captured quickly move on. With so many birds around and so much ground for them to cover, the odds are against a given bird being captured more than once. There are exceptions however, and paying attention to recaptured birds can sometimes provide insight into the decisions migratory birds make during their long flights to their wintering grounds. 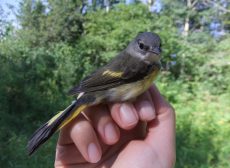 American Redstarts are a small species of warbler whose mature males are strikingly coloured in black and orange. Young males start out grey and yellow like the females and take a full year to develop their mature colouring, sometimes taking on a mottled appearance in the meantime. We have captured many American Redstarts so far this fall, and on August 2nd, 13 of the 47 American Redstarts that were captured were ones that had already been banded this season. Previously the most American Redstarts recaptured on a single day was nine (on July 19, 2005) – so why were so many recaptured on just this one day?

The weather on August 3rd provided a clue. It was an extremely stormy morning, with thunderstorms visible all around Slave Lake. Not at all the kind of weather to be flying in! In general, a bird’s decision to migrate or not depends very much on wind and rain. The unsettled conditions that led to the severe weather experienced on August 3rd probably caused many birds to remain in the area rather than risk flying straight into a storm. The heat would also have delayed their migration, as warm overnight temperatures encourage birds to linger for longer than they would otherwise. Once the weather clears and temperatures fall the station will be back to capturing new, unbanded birds, with only a handful of recaptures of various species each day. 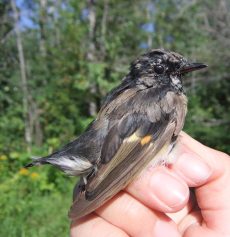 Sheer strength in numbers is another factor in why so many American Redstarts were recaptured. They have been very common this fall with 238 banded, which is already more than the fall average of 203 and places them as our current fall top banded species.

Aside from this interval of inclement weather, fall migration has been busy over the past week, with several days when over 100 birds were banded. This week also marked the completion of the LSLBO’s MAPS (Monitoring Avian Productivity and Survivorship) program for 2020. A preliminary 497 birds of 32 species were banded to monitor local breeding birds – a record high in our 27 years of contributing to this program! More on the wrap up of MAPS will come next week.