Just how many birds caught already have bands on them? A common question at the banding lab, and one that we as banders are also very interested in. Over the duration of this past spring migration, we logged 101 recaptures.

The majority of these recaptures are usually individuals who have recently been banded but are caught multiple times during their stopover at the lab. For instance, one white-throated sparrow banded on May 12th was processed eleven more times between then and May 30th!

Other notable recaptures include an ovenbird banded in 2014, and a mourning warbler banded in 2015 who was caught three days in a row.

For the birds that are recaptured, what stories might they have to tell? We know from when they’re banded how many times they’ve migrated since then—twice a year! So that ovenbird from 2014 (estimated as having hatched the previous year) has already made the journey twice since hatching, and by this year she’s done it twelve times altogether.

As for the birds we have banded during our MAPS period, we caught our first black-throated green warbler of the year, who also happens to be a recapture! This female was first caught in June of last year and aged to be over two years old. 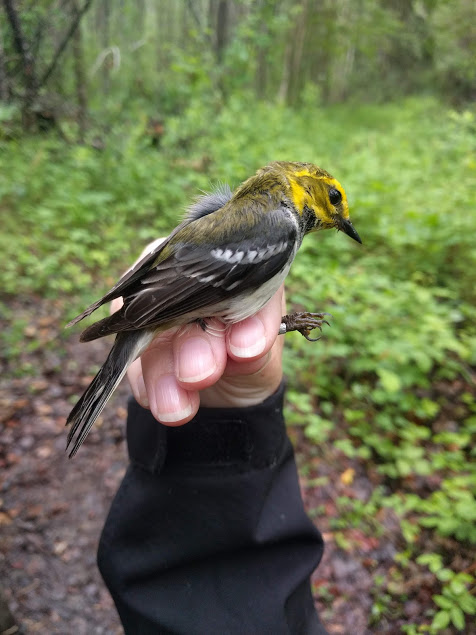 The black-throated green warbler breeds as far as the northern edge of Alberta and BC, throughout Ontario, Quebec and the Maritimes, and as far south as Tennessee and North Carolina. When it comes time for the winter, however, our friend won’t go any further north than Mexico, preferring the warmth of Central America. If she winters in Costa Rica, she flies at least 11,500 km a year—that’s a minimum of 35,000 km total for a bird her age, and all to return to the same breeding ground year after year.

For a bird migrating that distance, it must be difficult navigating the complexities of a human-formed landscape. Skyscrapers and other shiny structures act as barriers for migration corridors—pathways birds follow to get from point A to point B—where in ideal circumstances they are funneled by lakes and mountains. Birds must adapt on the fly to find the safest route back to their breeding grounds.

Why bother migrating so far if it’s so dangerous? Because birds go where the food is, and whether these foods are seeds, bugs or berries, their abundance is affected by the climate in which they grow. The black-throated green warbler is primarily an insectivore during the breeding season, branch-hopping and hovering beneath leaves to snatch up their favourite snacks hiding there. In their wintering range, this warbler will eat protein-rich buds from the tropical cecropia tree. Neither of these food sources are readily available in an Albertan winter, so the black-throated green must move on.

The newly hatched have begun their trek to their southern wintering grounds, while the veteran birds take their time later on in the season. If you would like to see what we do at the banding lab, drop in tours begin Saturday, July 13th for the fall migration.