Despite summer just beginning for many people, the Lesser Slave Lake Bird Observatory launched its Fall Migration Monitoring program on July 12. This is the time of year where songbirds hatched a month ago begin trickling away from their hatching grounds while their parents stick around to replace old feathers before undertaking their own southward expedition. 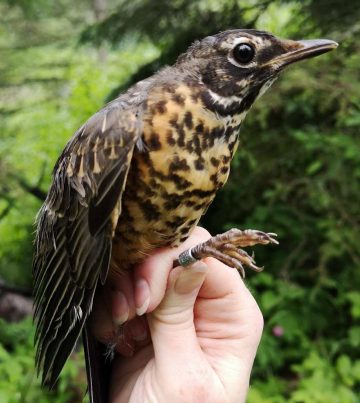 Pictured: Young American Robin banded this week in our MAPS program. If you pay attention around town, you may be able to see these spotted youngsters being fed by their parents.

We have had a gloomy start as high winds kept our nets shut and limited our ability to detect birds over the thunderous waves and swaying trees. Although a handful of birds were observed actively migrating in the days leading up to July 12, in such poor weather, birds are sheltering in place and we have seen little migration activity during the monitoring program itself.

While it has been much too windy for birds to migrate, many still attend to the task of feeding their young. Most birds have already left the nest, but are still too young to fend for themselves. Adults continue to feed their babies and if you pay careful attention, you can see parents bringing beaks full of food to the hungry, gaping mouths throughout the forest or even in your own backyard.

We continue to manage our MAPS program, which stands for “Monitoring Avian Productivity and Survivorship” and focuses on breeding birds. In biology, ‘productivity’ does not relate to how efficiently an animal can work, but rather how many young an animal can raise. With the monumental the task of rapidly growing to the size of an adult and promptly after migrating south, birds produce many young – far too many than can possibly survive the year. Since we love our birds, we want productivity to be high. That is to say, we want to see hordes of birds hatched this summer moving south to increase the odds that some of them will make it back to enrich the forest next year. 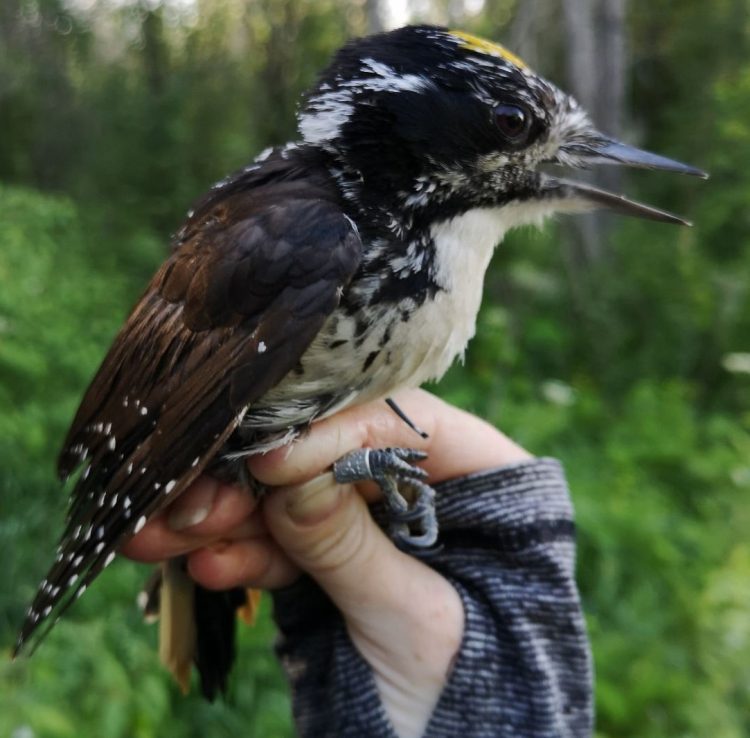 Pictured: Young American Three-toed Woodpecker banded during the MAPS program – only the fourth bird of this species that we have ever banded at the LSLBO.

This week we captured one such bird that was hatched recently that we very rarely see – an American Three-toed Woodpecker! In fact, this is only the fourth Three-toed Woodpecker that we have banded at our station. Although you may be familiar with the Hairy Woodpecker and the smaller Downy Woodpecker that are common at local bird feeders, the Three-toed Woodpecker prefers to stick to larger tracks of partially disturbed old growth stands throughout the boreal forest. They are similar in size to American Robins and males can have a yellow cap. They can also be confused with another local woodpecker species that is rarely observed, the Black-backed Woodpecker. Male Black-backed also have a yellow cap, but have a completely black back instead of the white streaked back of other woodpecker species.

Our monitoring programs remain closed to the public.