It hasn’t been a very eventful week for us at the LSLBO. We completed out first round of MAPS banding and have been trying to get the 40 geolocators I mentioned last week deployed on Canada warblers for the University of Manitoba. We are about two thirds of the way done and we will be pushing hard over the next few days to get the rest out. Last week I talked about how the geolocators are designed to keep track of daylight hours in conjunction with the date to map a bird’s migration route. What I didn’t explain is how we actually deploy these devices on the birds. For starters, the device is attached to the bird with a simple string harness that loops around its legs; we tie each unit on in the field so that it is custom fit to each individual bird’s size. The light sensor and battery pack for the geolocator end up sitting on the lower back over the pelvis so that it doesn’t interfere with flying.

The best part about doing this sort of work is that we get to go and ‘hunt’ the birds.

Typically all our work is passive netting; we set the nets, check them every half hour and band whatever has flown in. Whenever we need to catch a number of a certain species though, we have to go out and actually find individuals and specifically try to catch each of them. The challenge is we can’t just leave the net and wait for the bird to go in on its own because we could end up waiting all day for a single bird. Lucky for us, male birds are extremely territorial and we can use that to our advantage. Once we have located a male Canada warbler, we set a net near it and play a recording of another male Canada warbler singing. Furious at the perceived trespasser, our target bird will swoop all around the stereo trying to locate his ‘rival’ so he can chase him away. If everything goes according to plan, he will swoop right into our net and we can band him and affix him with a fancy new data collecting backpack. 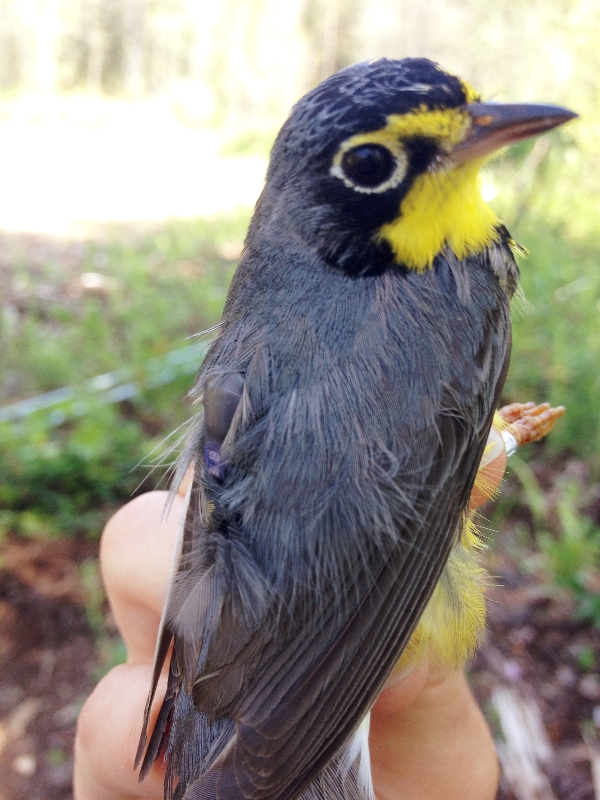 Canada warbler outfitted with a geolocator

MAPS banding was mostly unexciting; we banded very few birds which is typical of the first round. The one exciting bird was a baby hairy woodpecker. It was our first hatch-year bird of the year and was super cute and fluffy. Knowing that baby birds are starting to fledge reminds me to remind everyone that if you see a baby bird please don’t disturb it. Young birds (even those still unable to fly) will often perch in low shrubs or on the ground. This is normal. Chicks disperse from the nest as soon as they can walk or flutter so that they aren’t all in one place where a predator could kill them all (think of the ‘all your eggs in one basket’ saying). The parent birds will feed and check-up on each chick separately until they are ready to be on their own. Many well-meaning people ‘rescue’ baby birds every spring and despite the best care most of these chicks will die without their parents. So unless the chick is in immediate danger or you are 100% sure both parents are dead just leave it be. 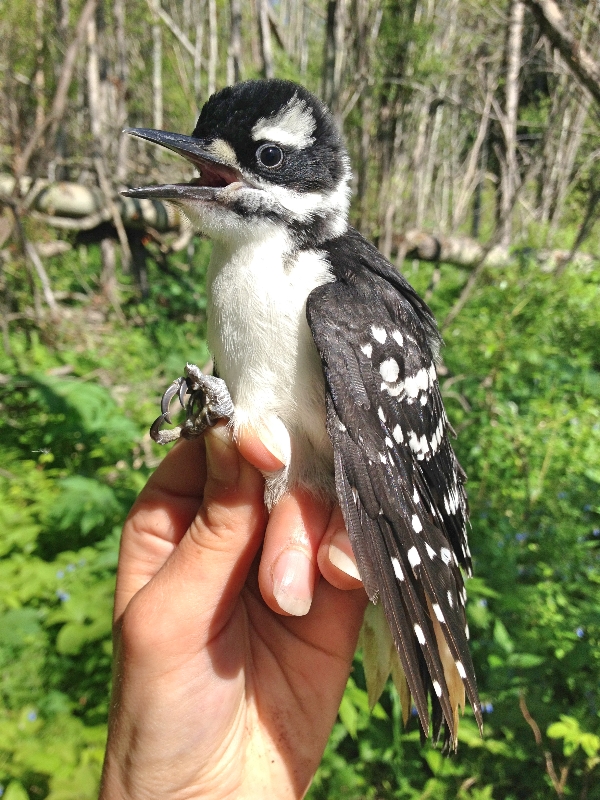