As we finish our second period of MAPS, shifts in breeding conditions are plentiful. These changes give hints to each bird’s nesting activity without us having to find the nest. The most detailed clues come from female songbirds who are often solely responsible for incubating a pair’s eggs. 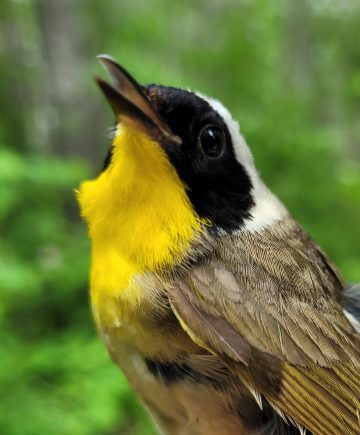 Above: Male Common Yellowthroats, like this guy captured yesterday, do not incubate the eggs but are busy feeding the female and later the chicks after they have hatched.

To efficiently warm these eggs, females drop the feathers on their belly for direct skin contact between her body and the eggs. This bare spot is called a brood patch. When the female is actively incubating her eggs and recently hatched nestlings, the brood patch is fluid-filled to increase the surface area touching the eggs and highly vascularized with many blood vessels to provide additional warmth. Some birds may even increase blood flow to their legs to provide an additional source of heat.

Brood patches may sense egg temperatures to promote healthy chick development. Eggs are sensitive to high temperatures which can cause chicks to become deformed. However, despite having evolved so many ways to keep their eggs warm, eggs can be resilient to cold temperatures. In fact, Mallard eggs have been documented to have frozen so completely that the shell cracks yet still hatch successfully. 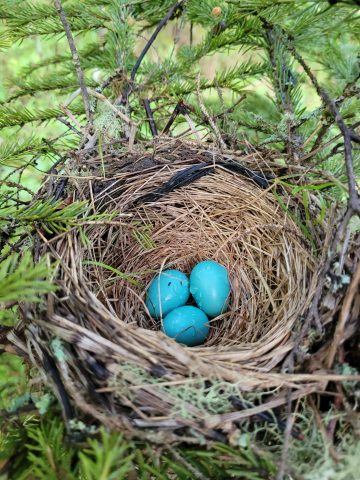 Above: This American Robin nest was a mystery for us this period as we debated whether it was abandoned or the female is simply waiting to lay more eggs before she begins incubation.

This relatively cold-resistant property of their eggs is yet another evolutionary feat of birds. After the nest has been constructed, almost all songbirds will lay just one egg per morning into it. If they begin incubating immediately after the first egg is laid, that egg will begin active development of the embryo and hatch much earlier than the last egg to be laid. This difference in development caused by immediate incubation is typical of owls, who will feed the oldest chick and sacrifice the youngest when times are tough without enough food to go around. Rather than use the owl strategy, songbirds will not begin incubating until they have laid all their eggs to keep the first egg laid in a kind of stasis and allow all eggs to hatch at roughly the same time for equal feeding between chicks.

Last week we were seeing only these fluid-filled brood patches, but this week many of them have drained of fluid and become dry and wrinkly. This suggests that these females are no longer actively incubating but are off the nest feeding larger nestlings with the male’s help. Soon these chicks will leave the nest too despite their short flight feathers. If you find what you think is an “abandoned” fledgling in the coming weeks, it is usually best just to leave it alone and give it space. Usually, the adults are waiting for the danger they see you as to pass before they move in to continue caring for their chicks. Already many of the vanguards to the fledgling period have been spotted, including American Robins, Black-billed Magpies, and Ruffed Grouse.