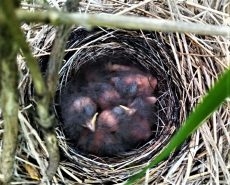 The boreal forest is often referred to as North America’s bird nursery, and this week our researchers are observing lots of signs that birds are right in the middle of their nesting season. While finishing up the second round of the MAPS (Monitoring Avian Productivity and Survivorship) program, they were detecting birds with eggs in their oviducts (which are quickly released) as well as birds actively feeding and sitting on nestlings. Fledgling myrtle warblers were spotted and we even captured a tiny fledgling winter wren.

In the Slave Lake region, most breeding occurs from mid-May to late July. It is a narrow window, so the birds must work quickly to make the most of our short summers. They need to establish territories, find a mate, build nests, lay eggs and incubate them, feed their nestlings, and provide post-fledgling care for a while after the young birds leave the nest. Then the parents might even attempt a second brood.  During a recent research project, we discovered that Canada warblers can get all of this done in only 58 days!  With all the competition for nesting space and resources, some of our winter resident birds like Canada jays get the jump on all those summer tourists by starting their breeding season in late winter while there is still snow on the ground so that they are all done by the time the migrants arrive. 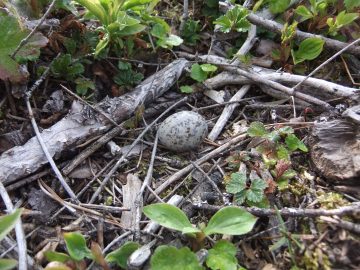 So how do all these migratory songbirds find good nesting sites and enough food to raise their families? Each bird species has its own special “niche”, a place that they occupy in the ecosystem. Birds from different species are great at sharing space and resources to raise their families.  Each species will use slightly different habitats, nesting sites, and different food sources. You will even find several different species of warblers all nesting in the same tree. In a spruce tree, you could spot a Cape May warbler nesting near the top of the tree and a myrtle warbler in the lower branches. Many people are surprised to hear that some songbirds don’t nest in trees at all. Some of our most common boreal forest species like Tennessee warblers and Canada warblers actually nest on the forest floor. Ovenbirds will build a unique domed structure on the forest floor. Bird nests are very hard to spot by design so that they can avoid being spotted by predators. And sometimes, birds won’t make a nest at all; killdeers and the common nighthawk just lay their eggs on the ground! Ultimately, using all of these different nesting strategies ensures breeding success, meaning birds can be in the same area while not directly competing with each other.

Finally, this is the time of year when we often get calls from people wanting to save a lost baby bird. Remember that the vast majority of “abandoned” baby birds are perfectly healthy fledglings whose parents are nearby and watching out for them. Young birds will leave the nest before many of them can fly and their parents will still be actively feeding them every few hours and caring for them until they are fully independent. So please just leave them alone and let mom and dad look after them.