We completed the second round of our Monitoring Avian Productivity and Survivorship (MAPS) program. We have recaptured many birds that were banded at the same sites in previous years; several of which we estimate to be over 4 years old. A pleasant capture was three silky Cedar Waxwings. These birds feel as soft as they look with their striking black masks and red waxy-tipped wings from which they get the name ‘waxwing’. They have a crest that can be raised when threatened, but it is usually flat. 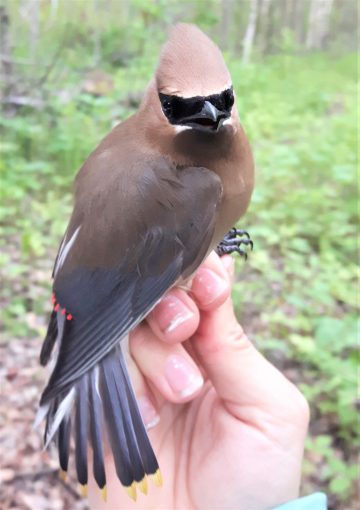 Cedar Waxwings breed across central and southern Canada in a diversity of habitats from wildlands to cities. Nesting activity peaks in July and August – later than other songbirds that tend to peak in June. Cedar Waxwings often spend their winters in southern Canada and central United States, but some years they will go as far south as Costa Rica.

Cedar Waxwings can survive on a diet of fruit for months at a time. To take advantage of good fruit patches, they will nest together in loose neighbourhoods with a dozen or so nests in close proximity. Young birds in close nests often fledge within two days of each other, which may increase their survival since there is safety in numbers.

New mating pairs are formed every year. Courtship displays involve the male and female repeatedly hopping towards one another and sometimes touching their bills together. The male will pass the female a berry, petal, or insect, which she will give back. After this gift has switched beaks several times, the female eats it.

Cup-shaped nests are built in forked branches by the female over the course of a week from grasses and twigs. To complete a nest may require 2,500 trips to gather nesting material. To speed up the process, they sometimes steal nesting material from completed nests of other birds. Three to five eggs are incubated for nearly two weeks before hatching. The nestlings grow for roughly two weeks before leaving the nest. The adults feed the young for another six to ten days after they have fledged. If a second set of young is going to be attempted in the same summer, the male will take over all of the care of the first set of fledglings while the female will build a second nest. 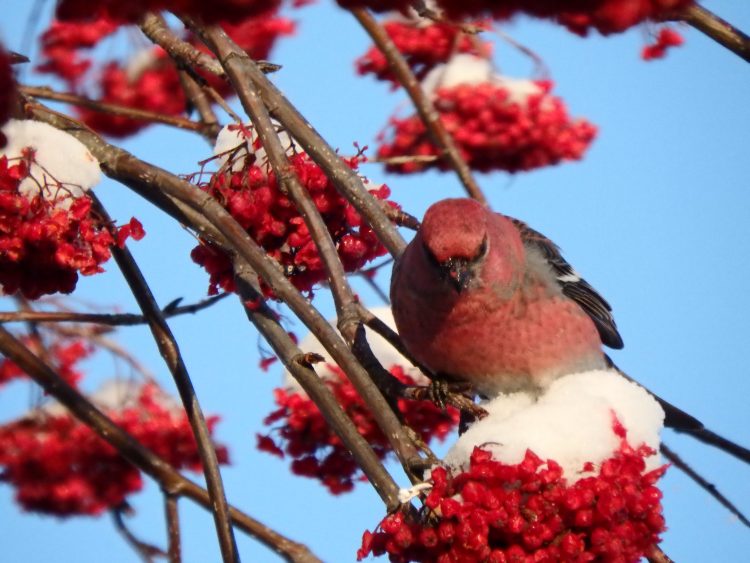 Pictured: Planting fruiting trees and shrubs, like Mountain Ash, can attract not only Cedar Waxwings to your yard in the summer, but can also colourful winter visitors such as Pine Grosbeak (pictured) and Bohemian Waxwings.

Since they eat mostly fruit and have a large range, Cedar Waxwings may play a key ecological roll in the dispersal of seeds across North America. Unfortunately this fruit-heavy diet makes them vulnerable to pesticide use. One report from an orchard that had been sprayed with parathion in British Columbia recorded 52 birds dead and 27 partly paralyzed due to the consumption of this pesticide. They may also become intoxicated from eating fermenting fruit, which may similarly poison the birds or make them easier targets for predators. Despite these threats, Cedar Waxwing populations are generally stable. To attract these wonderful birds to your yard, plant native fruiting trees such as dogwood or mountain ash.