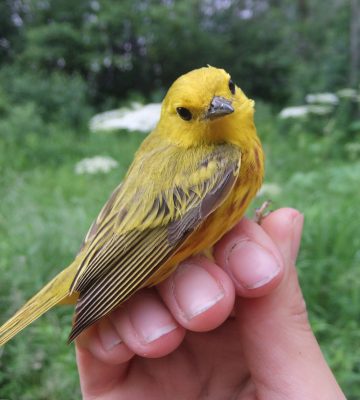 All the rainy weather we’ve been receiving this season has been a challenge. However, despite the wet conditions, we just wrapped up a series of breeding bird surveys as part of a special research project for the local forest industry. Staff observed tons of evidence this week that songbirds are actively breeding despite the cold wet weather, including lots of young birds are being fed by their parents as well as fledglings leaving their nests for the first time while still under the watchful eyes of their parents nearby.

One species that we’ve been seeing in abundance this year is the yellow warbler. One of our top 10 banded species, these beautiful warblers are easy to spot due to their bright yellow colouration. In fact, some people mistake a yellow warbler for an escaped pet canary! Both males and females are overall yellow with a beady black eye, stout bill, and a yellow-green back, with the brighter males also having distinct chestnut brown to burnt orange streaks on their breast. Like most warblers, the diet of the yellow warblers consists mainly of caterpillars and other insects, which they glean from twigs and foliage throughout the forest canopy. You may have also heard their familiar cheery song, which sounds like their singing “sweet, sweet, sweet, I’m so sweet”. These long distant migrants are one of the most widely distributed warbler species in North America and more than half of the world’s yellow warbler population breeds within Canada. 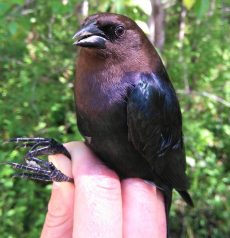 In the spring, yellow warblers build open cuplike nests that are fairly easy to find, which makes them susceptible to a common “brood parasite”. The brown-headed cowbird will lay her own eggs in the yellow warbler nest, tricking the female into incubating the cowbird eggs and eventually feeding and caring for the nestlings. The cowbirds evolved this nesting strategy as they historically followed the bison herds across the prairies. But unlike many other bird species, the yellow warblers have become very good at detecting cowbird eggs in their nests. Too small to evict the intruder, the yellow warbler simply builds a new nest right on top of the old one, often sacrificing her own eggs to start again. In one case, a persistent yellow warbler rebuilt her nest in six layers to cover up cowbird eggs. A recent study showed that yellow warblers have also developed a unique high-pitched “seet” call that they use to warn other yellow warblers of a nearby Brown-headed Cowbird. When a female hears this specialized call, she will rush back to her nest to prevent the cowbird from laying her egg. This new study suggests that red-winged blackbirds, who often nest in similar shrubby willow habitats, can also distinguish this call, which helps them protect their own nests from cowbirds as well. Cowbirds can trick more than 200 bird species into raising their young, but the yellow warbler is the only species that produces a distinct warning call that signals the cowbird’s presence.