On June 10, the LSLBO’s Spring Migration Monitoring program of 2021 was completed. With coverage every day since April 17, we have successfully documented the beginning, middle, and end of migration for most species that breed north of us or locally. In total, our field staff recorded 160 unique bird species during the monitoring period. Only Cedar Waxwings, Mourning Warblers, and Alder Flycatchers appear to be moving through, but in smaller numbers every day.

We cannot open the mist-nets that we use to capture birds when it is too cold, too windy or raining or the birds may get injured. Since the nets could be opened frequently once the cold weather in late April and early May passed, this year saw roughly average banding totals with an unofficial total of 977 birds banded from 45 species, close to the average of 937 bands per spring. The top five most frequently banded species were Swainson’s Thrush, American Redstart, White-throated Sparrow, Tennessee Warbler, and Least Flycatcher. The were a few notable captures from the thrush family with our second spring Townsend’s Solitaire and our ninth Veery.

Mourning Warblers were many with 47 banded, breaking their previous spring banding record of 35 set in 2017. One of these birds caused some excitement this week with its yellow throat and head which is typically white and gray this time of year. It was possibly a hybrid with another species of warbler. Although we are certain it was part Mourning Warbler, we cannot say who the unknown parent is. Apparently, they can hybridize with Canada Warblers, who have a yellow throat. It is even possible that both parents were indeed Mourning Warblers, but this baby came out with bizarre colours. Without a DNA test, we will never know. 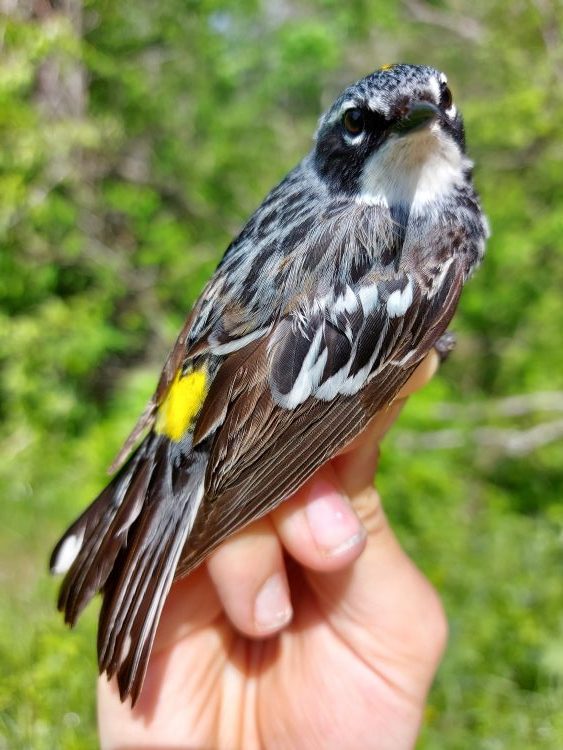 Above: This Myrtle Warbler was the last bird banded for Spring Migration Monitoring 2021. However, he was not migrating at all and appeared to be in breeding condition.

The very last bird banded of the 2021 Spring Migration Monitoring program was a handsome Myrtle Warbler. If you are a frequent reader of these articles, this should come as no surprise since they are our top banded species overall and one of our most frequently observed. With almost 15,500 banded, they blow all other species’ banding totals out of the water, including our second most commonly banded species, American Redstarts. To put it into perspective how many Myrtle Warblers we band, we have ‘only’ banded a little over 8,000 redstarts.

With migration monitoring completed until the fall, our time will now be taken up by a less frequent banding program called Monitoring Avian Productivity and Survivorship and by performing observational surveys in the wider area, both of which focus on breeding birds.