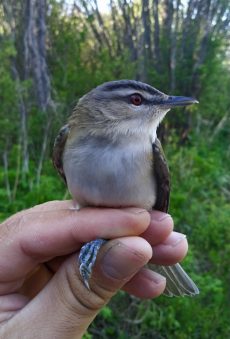 June 10th marked the last day of Spring Migration Monitoring at the Lesser Slave Lake Bird Observatory. By this time, most of the migratory songbirds are usually done their migration and are busy establishing breeding territories.  However, the slow spring migration trend continued as we were still observing active movements of many species including Pine Siskens, Common Yellowthroats, Mourning Warblers and flocks of Cedar Waxwings.  Banding was quiet this week, but we did recapture a beautiful Red-eyed Vireo from last year. Recaptures from previous years are quite rare, but the information gathered from these recaptures is one way that we can age migratory birds. In fact our current station record holder for longevity was another Red-eyed Vireo originally banded as an adult in 2003, and recaptured again in 2013 making him at least 11 year old!

By the end of Spring Migration, we banded 494 birds of 39 different species including our top five species; White-throated Sparrow (85), Swainson’s Thrush (83), Slate-Coloured Junco (48), American Tree Sparrow (30), and Common Yellowthroat (24). At first glance, 2020 may appear to be one of our slowest springs for numbers and diversity, but to get the real picture on the state of bird populations, we need to compare those numbers to “effort”. In other words, how much time and how many nets did we have open to catch those 494 birds as we will close nets for bird safety due to weather. This year, our other concern was staff safety. With COVID-19, the station didn’t operate full time, plus the aerial nets were not being used which often account for over 30% of the birds that we capture each spring. So you will need to wait for the Annual Report this fall to get the rest of the story. 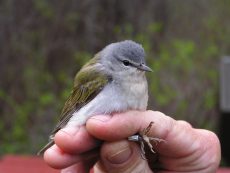 Although some birds may have been slow to arrive this spring, this is the year of the Tennessee Warbler! One of our top 10 banded birds at the LSLBO; this species actually just passes through Tennessee as it breeds almost exclusively in Canada.  Although they may lack the showy colours of other wood warblers, the Tennessee warbler more than makes up for it with their persistent song during the breeding season.  Imagine yourself surrounded by old lawn sprinklers. Tennessee Warbler populations fluctuate greatly due to their cyclical population trend that follows eruptions of spruce bud worm; their primary food source during breeding season. In eastern Canada, breeding population densities recorded during bud worm epidemics have exceeded 500 males/100 ha! The abundance of TEWA’s this year was anticipated as they were our second most common banded bird last fall with large numbers of juveniles. It is nice to “hear” that so many of them made it back this spring.

With the end of Spring Migration, we will now be focusing on the MAPS breeding bird monitoring program as well as some special research projects. But before you know it, fall migration will be here, so get out and enjoy those songbirds!