On June 10, our Spring Migration Monitoring program was wrapped up for the 2019 season. Since the Lesser Slave Lake Provincial Park was closed from May 31 to June 4 and the station could not be safely operated, it is difficult to say how successful our monitoring efforts were. It is unclear how, if at all, this five day interruption has impacted overall data quality. Although we will need to investigate this concern using statistics, at this time it seems that the impact was minimal since it happened late in the season. 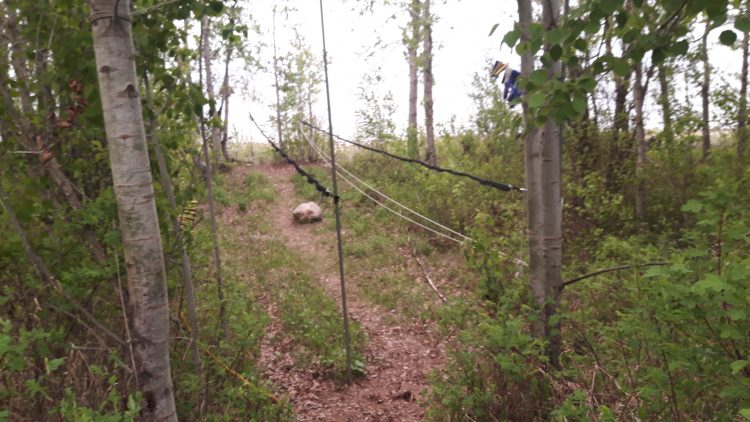 Pictured: Nets closed up as staff left the station due to an evacuation order on May 31.

To summarize our spring, migration across the entire season was low. A handful of days in early May recorded high numbers of geese and only a few days saw strong movements of songbirds. It is likely that the warm and sunny weather that has predominated caused migration to occur more at night and at higher altitudes where migrants cannot be easily observed, but where colder temperatures makes flying long distances easier. Migrating is like running a marathon; you would not want to do it on a hot day. This effect may have reduced the number of birds we counted.

The arrival dates for most species did not seem to deviate much from previous years. However, some species seemed to stay in the area for longer than they normally do. Relatively high counts of species that travel farther north to breed, such as American Tree Sparrows and Fox Sparrows, were notable. Generally, these species have already completed the peak of their migration by the time we begin monitoring. Since we capture birds and count every bird we see (regardless of species) we observed 146 bird species. Unusual observations included an Audubon’s Warbler, Pacific Loons, and a Parasitic Jaeger.

Although we did not receive much rain this spring, the wind was unrelenting. We cannot open the mist-nets that we use to capture birds when it is too windy or the birds may get injured. Due to the high winds, our nets were opened for less time than in the average season. Since the nets were often closed, this year was the fourth slowest banding season of our 25 years of standardized monitoring. An unofficial total of 581 birds from 44 species were banded (Table 1). This banding total is well below the spring average of 899 birds banded per season. The only notable capture was a juvenile Canada (Gray) Jay. 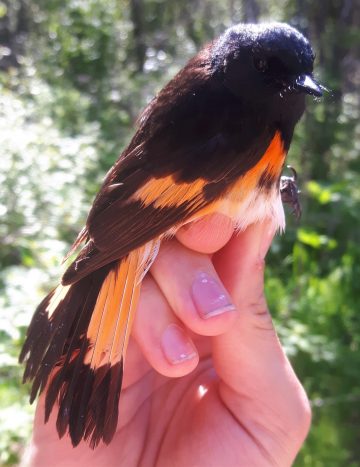 The very last bird banded of the 2019 Spring Migration Monitoring program was the stunning American Redstart pictured. This species is easy to find in the Lesser Slave Lake Provincial Park and can even be found along the forested sections of the Bear Trails right in town. Only older males display these sharp orange and black colours.

With migration monitoring completed until the fall, our time will now be taken up by a similar monitoring program that focuses on breeding birds.