As you may have noticed I wasn’t able to find the time last week to write an article. With the huge wind and rain storm we were scrambling to figure out where we stood in regards to our summer projects and come article day I found myself working a twelve hour day instead of writing. Between spring and fall migration we always run MAPS (Monitoring Avian Productivity and Survivorship). MAPS is a breeding banding program that is spearheaded by the Institute of Bird Populations in California and is run by hundreds of stations and individuals all across Canada and the United States. The purpose of it is to get a better idea of the breeding success rates of birds in various habitats and also how many birds survive year after year.

The LSLBO has four sites and each one has to be operated six times in ten day intervals. So essentially that means we band at four different locations over four days, wait six days, and then band for four days again, etc. That six day wait is the reason we generally try and pick up another summer project. This summer we were contracted to do some breeding bird surveys for a local forestry company. Unfortunately a lot of the sites we were to visit are up Martin Hills Road which was washed out in several places by the torrential amounts of water. Not only were we blocked off from most of our survey sites, we were also blocked off from the Boreal Centre (and a lot of our gear) for the days that HWY 88 was closed.

Now you would think be weathered out of everything would mean we had lots of downtime, but somehow we just got busier. There was scouting to be done to ensure we could reach some of the survey routes, there was heaps of clean up to do at our MAPS sites due to all the blowdown and there was plenty of scheduling and rescheduling (and rescheduling). Fortunately we were able to finish our first round of MAPS, but unfortunately we were only able to do about a third of the breeding bird surveys we had hoped to do.

With all that preamble out of the way I can write about what I had planned to write about last week – the annual spring wrap-up report. This spring we banded 604 birds which is well below the average of 910. We believe the slow banding was mostly a result of the long stretch of hot, calm weather that allowed birds to completely by-pass us. Those 604 birds represented 48 species, however, which is actually a very high diversity for the season – four birds better than the average of 44. 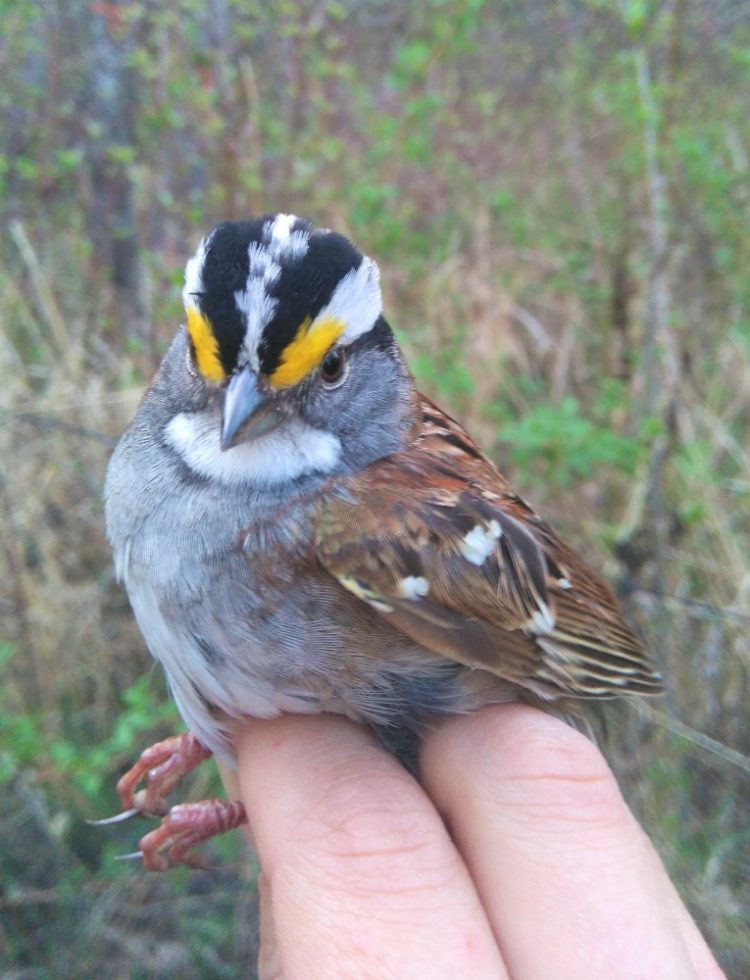 The top banded species were: white-throated sparrow (89, above their average of 66), Swainson’s thrush (52, below their average of 86), Slate-coloured junco (49 which is average), Alder flycatcher (45, above their average of 32 and the highest spring since 2000) and myrtle warbler (29, well below their average of 118). Despite low banding totals there was one species that broke its previous spring record; we banded 23 American robin which bested their previous high of 20 set in 2000. Robins also broke their single-day-observation record this year with 3300 seen in a single morning. The previous high was 2400 set back in 2012. The LSLBO also banded two new species this spring, a common redpoll very early in the spring, and then a brown thrasher on the third to last day of monitoring. The brown thrasher is a prairie bird normally only found about as far north as Calgary. Needless to say we were very surprised and very thrilled. 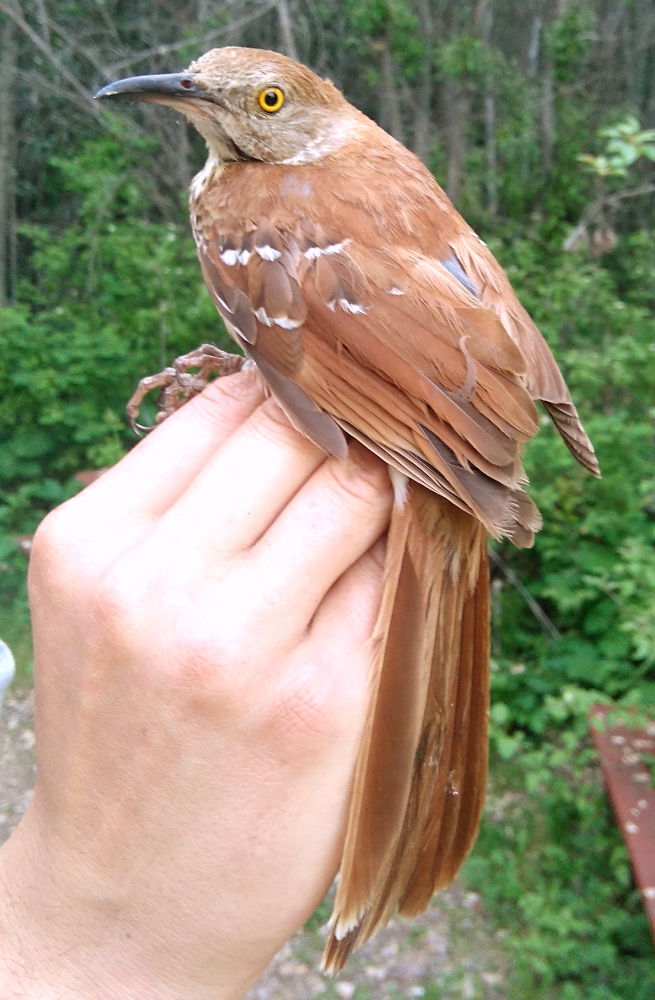