Many of our migratory species that breed locally were detected for the first time this year in the past week. These species included Blue-headed Vireos, Least Flycatchers, Western Tanagers (our mascot), Swainson’s Thrushes, Black-and-white Warblers, and Ovenbirds. We are excited to hear warblers’ songs joining in with the local sparrows that have already started to nest.

Several of the species that are arriving are long-distance migrants. These birds are travelling all the way from Central and South America to breed in the boreal forest. Their migration seems to be triggered by changes in day length on their wintering grounds. Since day length fluctuates predictably year to year, long-distance migrants’ departure dates from their southern wintering grounds and their arrival dates locally tend to be fairly consistent between years. 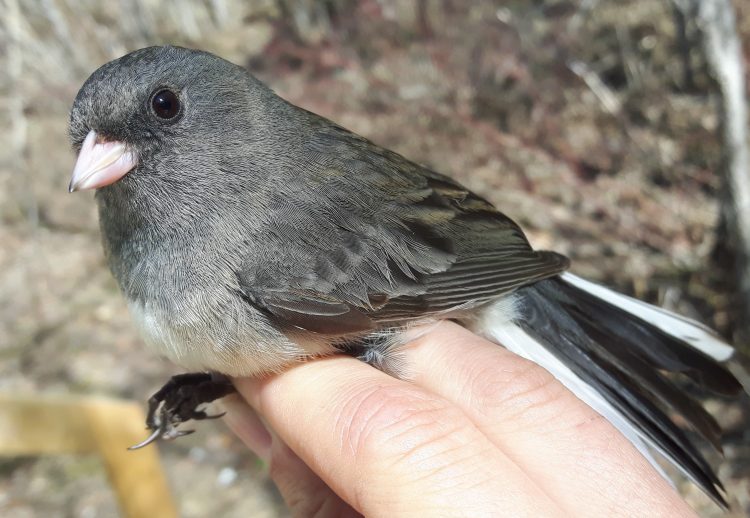 Some of the species we are seeing at the lab have stayed in the area longer than normal. These species are short-distance migrants, which are coming from southern USA and northern Mexico and seem to depend on changes in the weather to trigger their migrations. They migrate gradually waiting for warmer weather at each stop before making another push north. For example, in the past 25 years, we have seen the last of the migrating Slate-coloured Juncos at the station by May 11, on average. Although they do breed locally, the habitat we are located in is not suitable breeding habitat – they seem to prefer black-spruce bogs and muskeg. We can be reasonably confident that the Juncos we are seeing are still on the move. However, since they are short-distance migrants there is a large range within the dates that we see the last of them. Our last detection of this species can be as early as April 30 (2010) or as late as May 28 (2005).

Since short-distance migrants can adapt their migration schedule to weather conditions, they may be able to adapt to climate change. There is concern, however, for our long-distance migrants – those pretty warblers and gifted singers that add diversity to our boreal forest in the summer.

In lighter news, on May 22, we will be participating in the Great Canadian Birdathon. This will be a big day of birding where we will attempt to see as many species as possible within 24 hours as a fundraiser for the LSLBO and for bird conservation efforts across Canada. If you like what we do, please consider supporting Team Tanager (us) by donating here. We will be providing an overview of how our bird day went in next week’s update, so stay posted for that!