This week has been unusually slow and quiet for the Lesser Slave Lake Bird Observatory. Many of the species which breed north of us and migrate early in the spring have already moved on with only a few stragglers left. However, many of the later migrants have yet to arrive. Most years, this week is the most diverse due to the overlap between dawdlers from earlier species and the arrival of our locally breeding birds. To try to catch this diversity, Team Tanager did their big day of birding this past Wednesday, May 18, for the annual Great Canadian Birdathon fundraiser, but our second team (Birders in the Park) are not doing their big day until this upcoming weekend. To leave the suspense for which team was able to find more species you will have to wait until next week’s update and there is still time to donate if you have not yet gotten around to it.

Despite the slow movements, we are seeing some interesting recaptures. Part of the reason we band birds is to mark them as individuals. By giving each bird a unique nine-digit number, we can confidently say this Hairy Woodpecker is the same as the one we captured last week. Without a band, the best we can say is that there is a Hairy Woodpecker, but we do not know for certain it is the same bird. 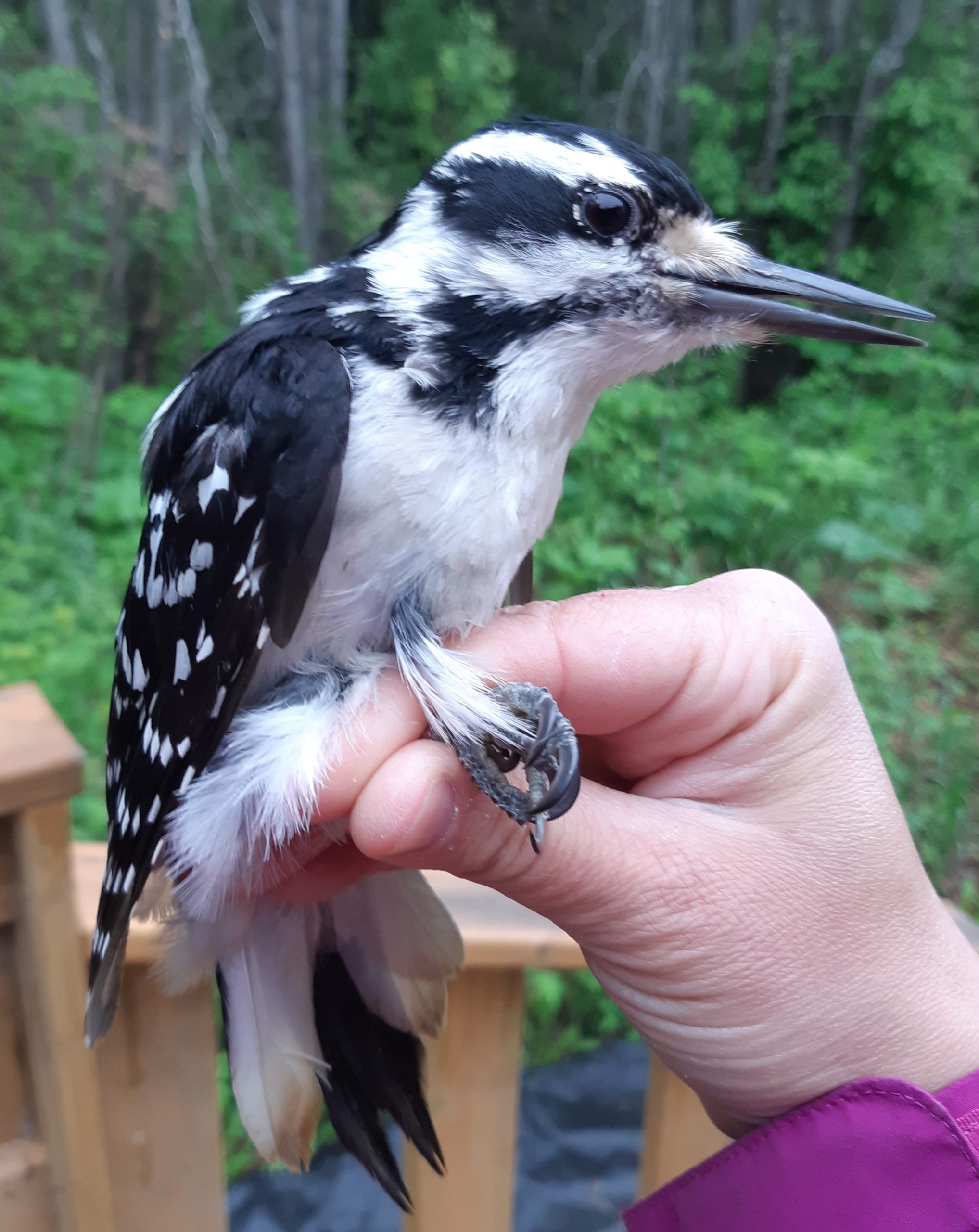 Above: A Hairy Woodpecker just like this one was recaptured just months before her tenth birthday.

So far, we have had 19 birds which were already banded get captured again. Most of these birds were banded this spring, but seven were banded in 2021. Two were banded in 2019, making them at least three years old, but amazingly one bird was banded back in 2014. This Hairy Woodpecker was banded when it was two years old and is now approaching its tenth birthday!

In addition to helping us understand how long some of these species can live, when a bird is found in a different location from where it was banded, we can also get some clues on how these wide-ranging animals move to their wintering grounds, where those wintering grounds might be, and sometimes how fast they are able to travel. Only 45 birds we have banded have been found again elsewhere (out of 99,542 bands since 1993). So far this year we have already received two reports of our birds being found somewhere else.

The first was an American Redstart we banded during his first migration south in August of 2020 and found again almost 3,200 km away in Tennessee on March 16. He was sadly found dead after having completed half of his second northward journey back to the Boreal Forest. The second recovery was a Northern Saw-whet Owl banded last fall and found on April 3 in Luseland, Saskatchewan. Due to the massive distances traveled by our migratory birds, conservation efforts must involve everyone’s help from here to South American nations.