With many season firsts, the LSLBO had a high diversity of bird species this week with 98 unique bird species recorded. Birdsong is filling the forest and sounds like the trees are more Myrtle Warblers and Black-and-White Warblers than leaves. The forest is not yet lush, but grows greener by the day to soon provide more cover and insects for our long-distance migrants as they arrive. 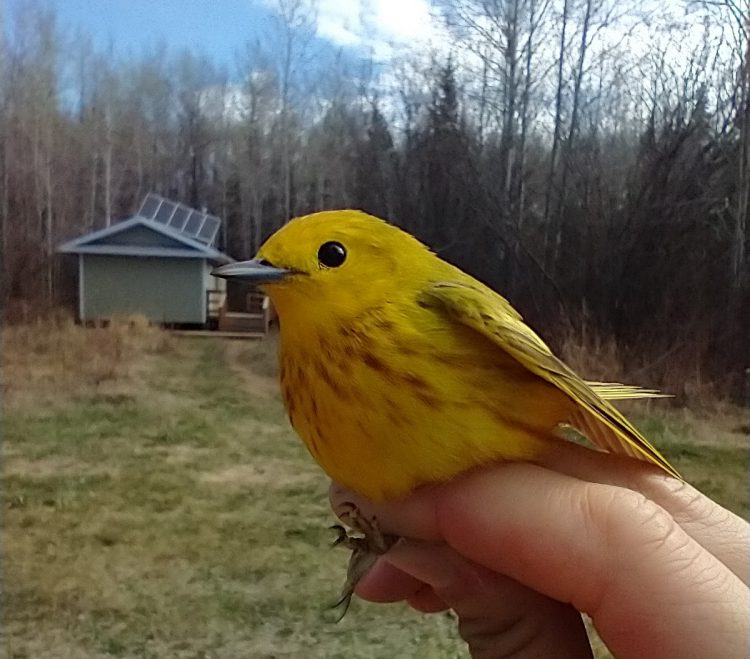 Above: Many male Yellow Warblers, like this one, have been found around the station, although the females are starting to trickle through as well.

Least Flycatchers and Yellow Warblers were plentiful in the nets over the weekend, but our captures have otherwise been rather quiet. Yellow Warblers, like many of our songbird species, have a migration strategy in which males arrive on the breeding grounds well ahead of females. It is often thought that this strategy provides male songbirds with the opportunity to sort out breeding territories well in advance of the female’s arrival. It also may give males a wider time-frame to successfully find a mate before the breeding window closes.

As the week wore on, poor weather forced the nets to close and pushed many species down low to forage. Birds in the bush are easier to identify than those darting overhead, and we got the pleasure of seeing some rare visitors, such as a couple Townsend’s Solitaires and a Say’s Phoebe. Still, many species didn’t feel like lingering for longer than a split second. Spread out flocks of warblers and sparrows zipped fast overhead, where even the best lighting often cannot make up for their speed when it comes to successfully identifying them. Many such blurs were Clay-coloured and Chipping Sparrows, the smallest sparrows in our area. While many species are just arriving, Slate-coloured Juncos, American Tree Sparrows, and Snow Geese appear to have long since moved through, with only a straggler here and there.

The high species diversity has us excited for our annual Great Canadian Birdathon! Without Team Thrasher competing from Southern Alberta this year, only two teams are participating to see as many bird species as possible in 24 hours. If you have been out to the observatory between 2004-18, you will have likely met Team Birders in the Park made up of Nicole and Richard Krikun who used to manage station operations. They will be scouring Sherwood Park over the long weekend. Team Tanager will represent the Slave Lake area on May 21. The LSLBO’s field staff: Robyn Perkins, Sachi Schott, and Bronwyn Robinson will be joined again this year by Wayne Bowles with somewhat different logistics than in previous years due to COVID-19 pandemic.  In 2020, Birders in the Park beat Team Tanager with an amazing 113 species to Tanager’s 92! Of the donations being collected, 75% goes directly to the LSLBO, and 25% to Birds Canada to fund ongoing national conservation efforts.  Although the event takes place this weekend, donations are accepted until the end of this year and tax receipts are available. Results and highlights will be shared in next week’s article.

To donate to Team Birders in the Park:

To donate to Team Tanager: