Stuff actually happened this week! Early in the week we had rain showers that started in the evening and didn’t stop until about 6:30 am the next morning. This was exactly what we had been waiting for – weather conditions that would force the birds to take a break from migrating to rest and feed. The first morning we had to delay setting the nets until the rain quit, but we observed lots of sparrows, mostly chipping, clay-coloured and surprisingly white-throated sparrows. We had assumed that the white-throateds were mostly done moving but apparently we were wrong. Once the rain let up and the sun came out and dried things off we began to notice that thrush were also migrating through the bush and along the trail and shore. They were mostly Swainson’s thrush, but grey-cheeked and hermit were seen as well. The next day there were even more sparrows and thrush around and we had a good day of banding with just under 50 birds caught. As the week progressed the thrush started to peter out and be replaced by various warbler species like American redstart, Tennessee warbler, common yellowthroat and yellow warbler. It is so nice to finally have a good diversity of warblers around. When we arrive at the observatory first thing in the morning now there are dozens of species singing in the parking lot instead of just a handful. 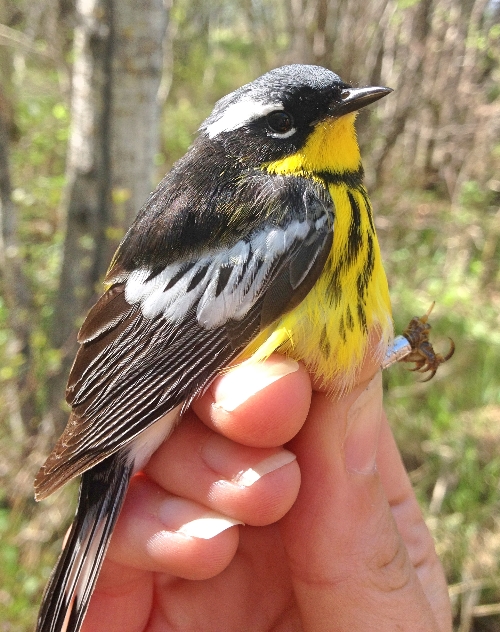 Consistently good banding totals and the arrival of most of our warblers species are both great, but neither is the highlight of the week. The highlight was catching one of the ‘uncatchables’. There are several species of bird that we consistently see at the lab but never catch. Some days we will count hundreds of pipits, but we’ve never caught one. We see almost as many Say’s phoebe migrating as we do eastern phoebe; we catch the eastern but never the Say’s. Horned lark, redpoll, Lapland longspur, any of the swallows, American goldfinch, forget about it, uncatchable. Then, the other day, one of the most notorious uncatchable birds was caught. An evening grosbeak. As anyone with a birdfeeder knows, evening grosbeak are a common bird. We hear them calling as they fly overhead at least once a day. We suspect they go back and forth from town and Marten Beach so that they are sure they have gotten every sunflower seed that is to be had. 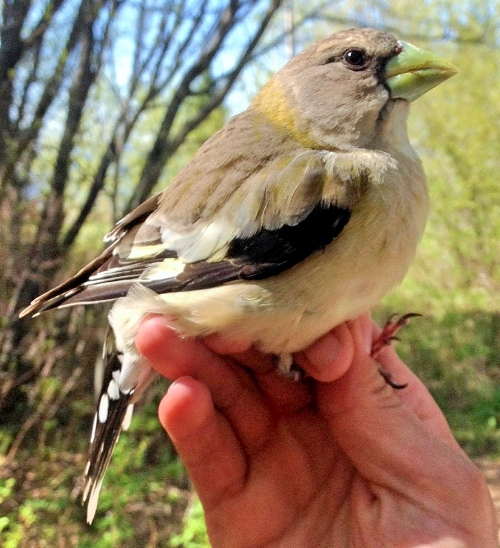 On top of being uncatchable evening grosbeak are also ‘unseeable’. When they are perched it’s a cinch, they are big, beautiful, obvious birds. When they are flying it is another story entirely. They have a distinct flight call “pew, pew, pew” but they throw their voices (perhaps to elude predators?). We hear them going over but we probably only actually find them in the sky once in every ten times. It shouldn’t be that hard – but trust me, it is. For one gorgeous female evening grosbeak, however, she has been both seen and caught. Much to our delight. 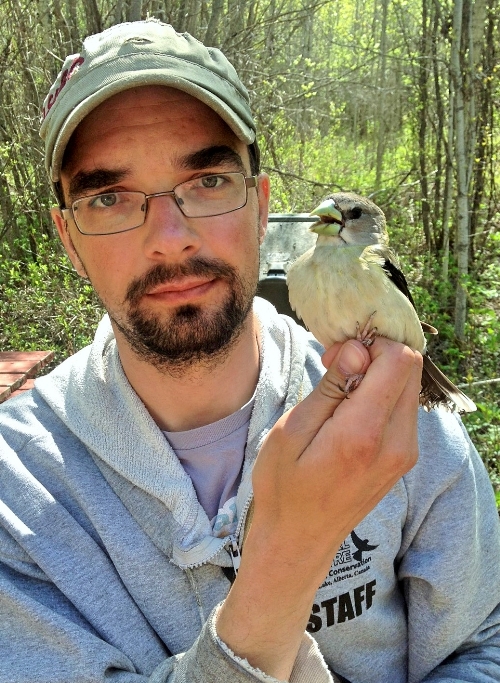