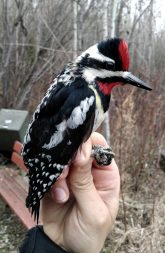 If you’ve been lucky enough to enjoy the sunshine and spend some time outdoors over the last week, you will likely have noticed an increase in the number of beautiful bird songs around your neighbourhood and in the forest. This is no coincidence! In previous years, the third week of May has consistently been the week when things really start to pick up at the Lesser Slave Lake Bird Observatory. This year was no exception. New species are being recorded almost every day at the banding lab as our seasonal migrants begin to trickle in. Although banding numbers remain low, most of our locally-breeding warblers and sparrows have officially arrived on their breeding grounds for the summer. Others, like the Orange-crowned Warbler and Gray-cheeked Thrush, are stopping only briefly to forage while passing through on their journey further north. One of the highlights of the week was banding two Yellow-bellied Sapsuckers, a male and a female, on the same day! Sapsuckers are one of the few long-distance migratory woodpeckers in the boreal forest and spend their winters in the southeastern United States and Panama.

On May 20th, the Lesser Slave Lake Bird Observatory (LSLBO) participated in the Great Canadian Birdathon, a yearly fundraiser organized by Birds Canada. This year, we had two teams go head-to-head in a friendly competition to raise money for the LSLBO and bird conservation programs across Canada. Our own Bander in Charge Robyn Perkins, Field Assistant Cory Cardinal, and long-time LSLBO member Wayne Bowles competed together as Team Tanager in the Slave Lake area, while retired banders Richard and Nicole Krikun formed Team Birders in the Park closer to the city. Although the logistics were a little different than in previous years due to COVID-19, the premise was the same: the team that counts the most bird species in a 24-hour period wins! This year, Team Tanager, who scoured the area in separate vehicles and stayed in touch with each other remotely to maintain physical distancing, recorded 92 species. While the number of species was down by one from our 2019 results, some interesting sightings for 2020 included a Hooded Merganser, Horned Grebe, Baltimore Oriole, and a Eurasian Collared-Dove. However, Team Tanager was outmatched by Team Birders in the Park, who recorded an impressive 113 species. 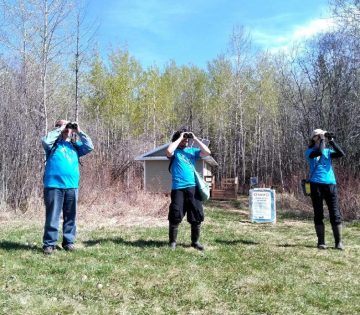 A great big thank you and congratulations to both teams! 75% of all donations received by both teams directly support research initiatives at the LSLBO, while the remaining funds go toward supporting bird conservation programs through Birds Canada all across the country.  Although our two teams have already finished the Great Canadian Birdathon, you can still make a donation to either team to help support the Lesser Slave Lake Bird Observatory by following the links below:

Team Birders in the Park:

Thank you for your continued support!

Species observed (taxonomic order) in the local area by Team Tanager on May 20, 2020: