As promised, results are in for the Lesser Slave Lake Bird Observatory’s annual fundraiser: the Great Canadian Birdathon. If you feel out of the loop, during the Birdathon teams across Canada do a marathon of birding, trying to find as many bird species as possible within 24 hours to collect donations for their favourite local bird conservation groups. 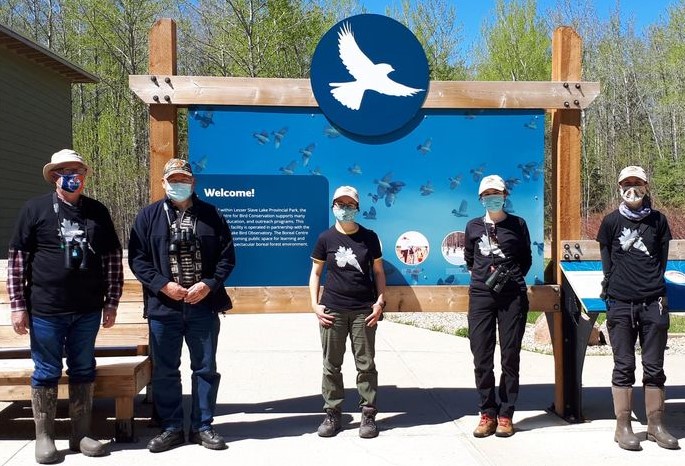 This year the LSLBO had two teams competing with each other. “Team Tanager” is our field staff plus two long term supporters, Wayne Bowles and Al Hovan. They covered the area around Slave Lake on May 21 after spending the morning working at the monitoring station. Their competition was Nicole and Richard Krikun, who ‘retired’ from the LSLBO in 2018. They competed as “Birders in the Park” and scoured areas west of Edmonton on May 23.

Team Tanager did well for itself and found 100 species (Table 1), surpassing their 2020 species total of 92. They had two highlights. The first was a stunning male Oregon Junco. Like the locally common Slate-coloured Junco, Oregon Juncos are a subspecies of Dark-eyed Junco. However, they are more commonly found west of the Rockies making them a rare find. The second highlight was a pair of Cinnamon Teal – a small duck that breeds in the prairies of Alberta and rarely ventures this far north.

Above: This year’s winners Birders in the Park. Nicole Krikun (left) and Richard Krikun (right) had a great jaunt in the Fort Assiniboine Sandhills Wildland. 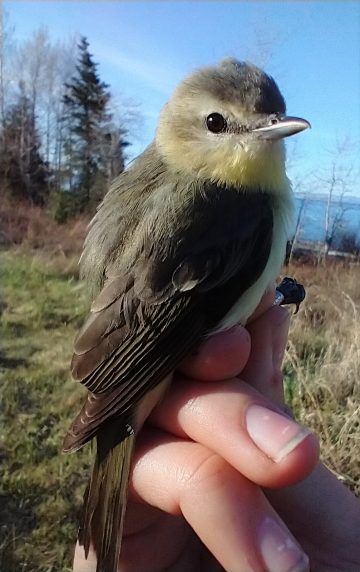 Above: This little fluffball of a Philadelphia Vireo was one of the four species of vireo found by Team Tanager during their Birdathon!

Nonetheless claiming the bragging rights was team Birders in the Park, who did even better with 106 species, although down from 136 in 2020. Highlights for them were plentiful and included Veery, Cape May Warbler, Western Grebe, Bay-breasted Warbler, Pectoral Sandpiper, and Bobolink!

As for what has been happening at the bird observatory over the past week, it has again been very slow and we have not seen much active migration. Canada Warblers and several other warbler species appear to be moving through the area in low numbers. Calmer and warmer weather has helped our capture rates by allowing us to have the nets open more frequently than the preceding week and 162 birds were banded. Some of which are beginning to show signs that eggs will soon be laid in nests hidden in every layer of the forest. So far this season, we have banded 418 birds from 40 species.

The LSLBO will continue to be closed to the public during the spring migration season, but you can keep up-to-date through both these articles and our Facebook page at “Lesser Slave Lake Bird Observatory”!

To congratulate Team Birders in the Park:

To offer condolences to Team Tanager: