This week started off with an important day –my favourite day of the year: the Birdathon. Before I get into the recap of our busy birding day, first I want to say a big thank-you to everyone who donated to us; we had our best fund-raising year to-date!

This year, our Great Canadian Birdathon started at 4:55 am on May 21 and ended at 4:54 am May 22. As you likely recall from my article a few weeks ago, the goal of the Birdathon is to try and find as many species of bird as you can in a 24 hour period. This year, like last year, we were in competition with Team Thrasher down in Lethbridge (Manned by two of the LSLBO’s oldest members, Ken Orich and Wayne Bowles). Our day started off when we picked up our field assistant at the staff trailer and heard a ruffed grouse drumming. After that we went to the lab and collected another 67 species as part of our regular work day. Some highlights from the lab included the first red-eyed vireo and eastern kingbird of the spring. We also saw a northern goshawk (and elusive bird and our only non-migratory hawk). 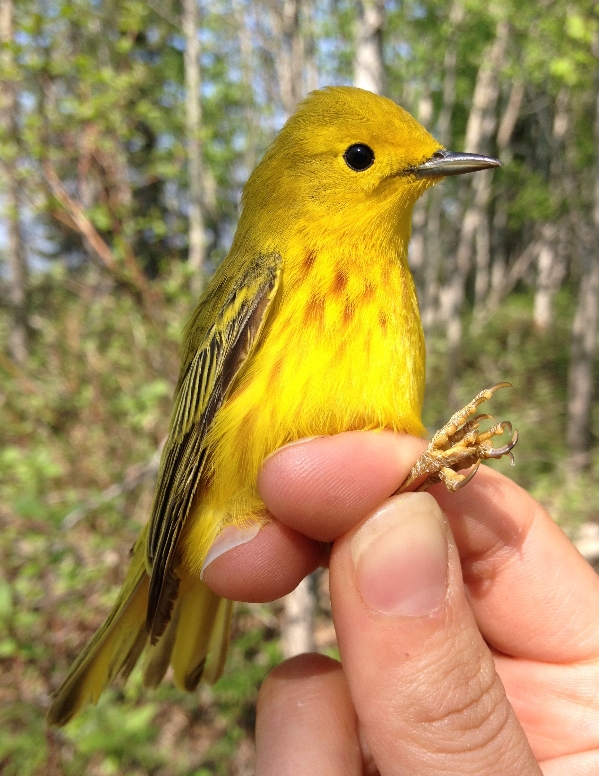 Yellow Warbler banded at the lab on our Birdathon day.

We left the lab and headed up Marten Mountain where we are usually able to score a few old-growth specialists. Unfortunately the mountain wasn’t good to us this year and we were only able to collect one species up there – a golden-crowned kinglet. With moral a bit low from all the time wasted for just one species we headed down and hit-up every pond, marsh and wet area between there and town. We were able to get the majority of our ducks but were still missing some really gimme birds like the ring-billed gull. Surprisingly the weir ended up being one of our best stops giving us both tern species, three species of swallow, American pipit, double-crested cormorants and Bonaparte’s gull. With water birds out of the way we grabbed some McDonald’s to-go and went and had a picnic supper in the backyard of our competitor, Wayne Bowles, with hopes of seeing a ruby-throated hummingbird. Sadly for us, Wayne’s feeders stayed loyal to him and didn’t help us out.

After finishing supper we made several more stops picking up a couple species here and there (including that darn ring-billed gull!). By 8:30 pm we had been birding for 15.5 hours straight and decided to call it a day. We were at 97 species. Wanting to hit 100, I woke up extra early the next day and stopped at a major pond complex on the way to work to listen for some nocturnal birds like owls or nighthawk. Parked beside the pond at 4:30 am I heard a palm warbler singing and then, to my immense delight, a yellow rail. Yellow rail are a nocturnal species of water bird related to coots and are considered to be the most elusive bird species in Canada. They are small, phenomenally well camouflaged, shy and only call at night. This was the first time I have ever encountered one. With those two species we ended up with 99. In the end, despite our best efforts, Team Thrasher prevailed over us, counting 102 species. Despite our loss, it was still an awesome day full of some great birds and we look forward to doing it again next May. 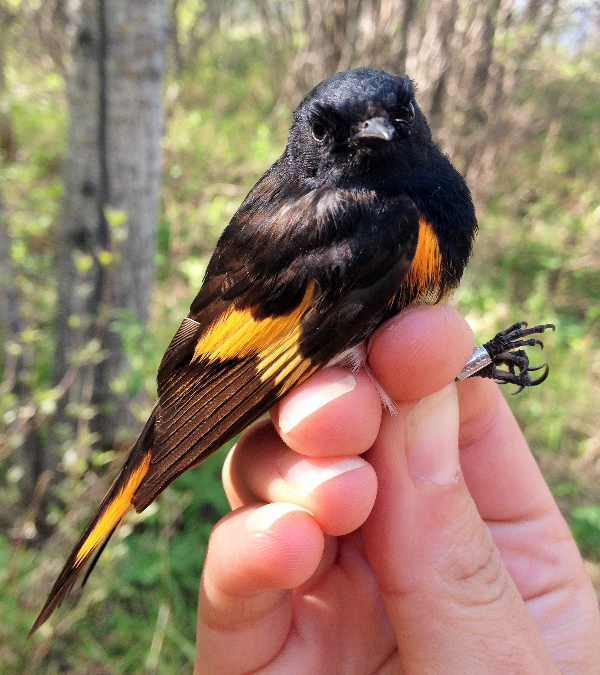