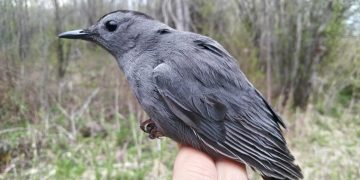 Spring is starting to ramp up at the LSLBO as we reach our peak migration monitoring period. Over the past week, we have observed consistent movement of Swainson’s Thrush, White-throated Sparrows, Chipping Sparrows, and Clay-coloured Sparrows. May 27th was an especially big day for warblers, with over 1000 warblers counted migrating overhead including large numbers of Myrtle warblers. Over the past week, net coverage has been good despite some unsettled weather and 132 birds were banded.

It has been a week for unusual records for the station. Caspian Terns were spotted on two different days. Although we are located on edge of their migration route, these terns are usually only observed at the LSLBO every two or three years with the last one recorded in 2016.  We also recorded a female Mountain Bluebird this week. Visitors with nest boxes will often asked us about bluebirds, but this was only the 6th bluebird ever spotted at the station and the first one in almost 20 years as the forest and lakeshore habitat at the station is not suitable for bluebirds.  Staff also banded two Gray Catbirds this week; only #8 and #9 since 1994.  Both of these species are more common in southern and central Alberta, with the LSLBO located on the northern edge of their breeding ranges. 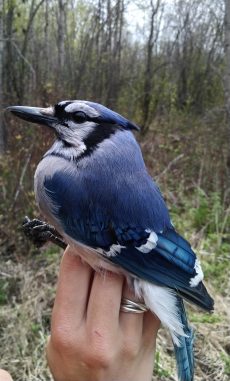 Besides the emergence of green leaves and the ice finally disappearing off the lake, there are other signs of spring. The boreal forest is coming alive with the sounds of songbirds. Tennessee warblers are busy setting up their territories around the banding lab and are nearly out competing the white-throated sparrows for singing in both volume and frequency.  Besides being beautiful, these songs serve a very important purpose. For most songbird species, males are actively using their songs to establish and defend their territory and to attract a mate.  Birds songs can be very simple or very complex depending on the species, but each species has a song that is unique to them. Learning the songs is a great way to improve your bird ID skills. You may not be able to see them, but they are telling you who they are if you just listen carefully.  In fact, researchers will use bird songs to help identify the types and number of birds breeding in a particular area. Learning bird songs is a great way to improve your bird ID skills when you can’t spot those tiny birds up in the tree. But you will need to learn and practise those songs quickly. Once the breeding season is over and the young birds have fledged from the nest, the male birds no longer need to sing to defend their territory. The forest will be slowly become quiet again for another year, so get out and enjoy this beautiful songbird season while you can.

Check out the May 27 Daily Census Checklist on e-bird.