The LSLBO’s operations were momentarily halted as we were evacuated from the station on May 30 due to the fire near Wabasca. We only resumed operations on June 5 when the Park reopened.

For what could be monitored across the past two weeks, it has been another slow period and very few birds have been observed migrating through the area. The hot weather may be causing birds to migrate more at night and at higher altitudes where we cannot easily see them. Migration is similar to running a marathon – it is difficult to do in during a hot summer day.

Banding was similarly slow with several of our captures being birds that we had already banded earlier in the season that are setting up to breed. For many of our species, nest construction seems to be complete and females are now being captured developing eggs – to a trained eye, they can look pregnant while in the hand! 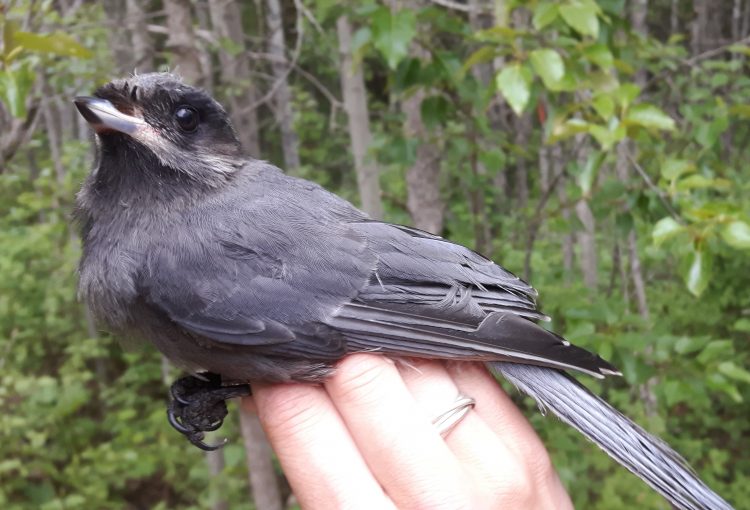 An interesting capture this week was a juvenile Canada Jay (also known Whisky Jack or, until a year ago, Gray Jay). Juvenile Canada Jays are very dark gray overall until they replace their feathers in July or August. This bird may even be one of the juveniles that staff observed on May 17 being cared for by its parents near the Boreal Centre for Bird Conservation. Songbirds tend to leave the nest before they can support themselves. It is much more difficult for a predator to eat all of the young if they can move short distances than it is if they are conveniently contained within a nest. Canada Jay parents will still care for their young for nearly a month after they have left the nest. We estimate that the egg this Canada Jay emerged from was laid in mid-March, when snow was still thick on the ground.

Canada Jays are members of the Corvid family along with Crows and Blue Jays. As permanent residents of the boreal forest, they live with us locally year round. If they can make it through their first year, they can live 8 years on average; but the oldest Canada Jay known was 17 years old. They prefer spruce and pine-dominated forests and are common around Smith. They may require cold temperatures in winter to successfully store the thousands of perishable food items that they hide away in the summer for the difficult winter days to come. They are omnivorous and can eat berries, seeds, insects, rodents, frogs, and nestling birds. These protein-rich foods are coated with sticky saliva and then nestled it into bark crevices or under tufts of lichen on spruce trees. The antibacterial properties of spruce trees may further help store meats.

There have been glimpses of Canada Jays at the station for most of our 26 years of monitoring, although no pairs have bred in the immediate area since we do not have many mature spruce trees. Only 3 Canada Jays have been banded by the LSLBO and all were captured during spring migration monitoring in juvenile plumage as they tried to find a new territory on which to live.