Our 8th most commonly banded species at the LSLBO is the Canada Warbler, a grey and yellow bird whose most distinctive feature is its necklace of black feathers. They are a long-distance migrant that breeds in the boreal forest. Because of habitat change on their wintering grounds, they are listed as threatened in Canada, while the Government of Alberta is reviewing their conservation status, using data collected by LSLBO programs and similar projects. 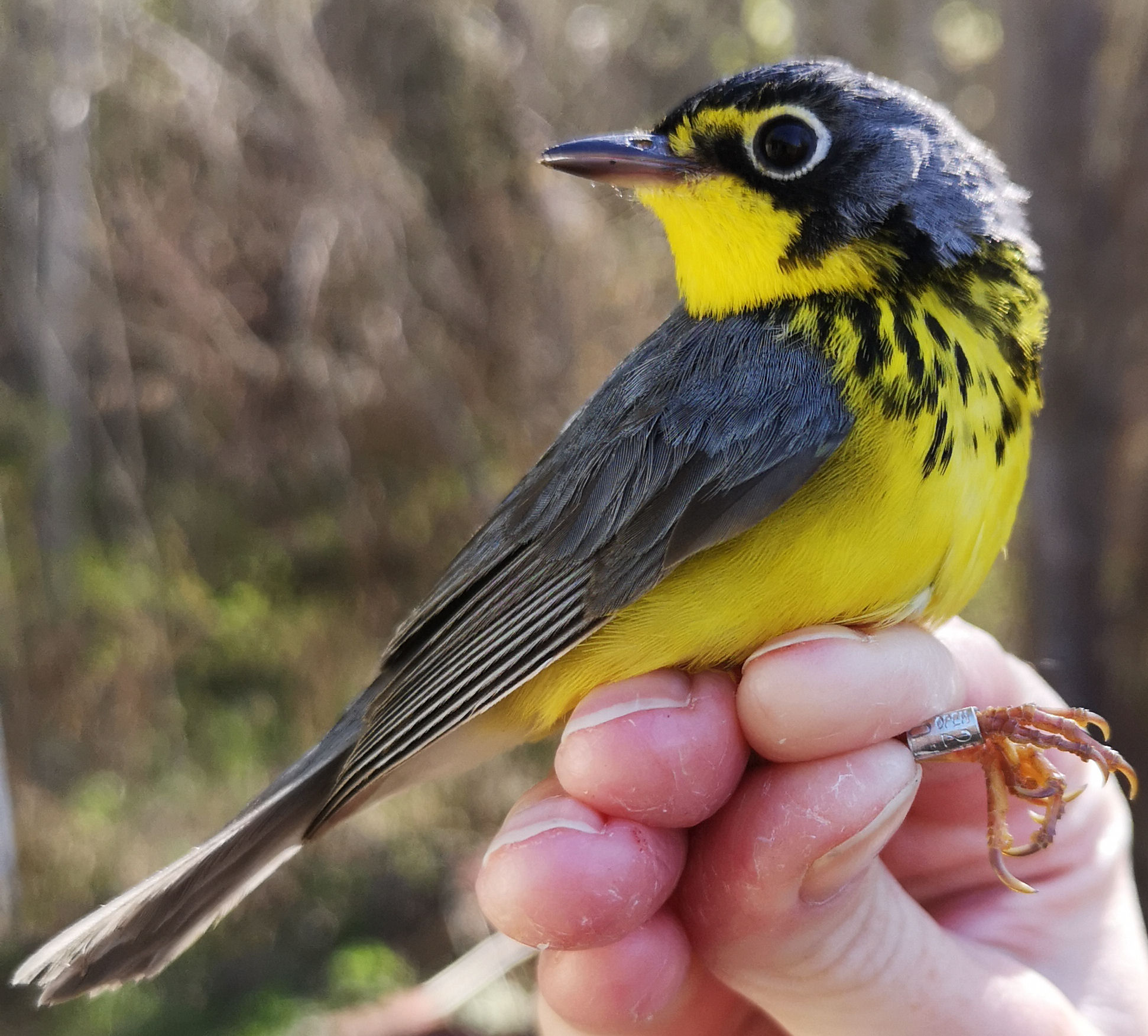 Above: Although this fellow was our first Canada Warbler to be banded for the season on May 22, we have been capturing multiple new ones daily.

In 2014-2016 the LSLBO contributed to a study to illuminate some of the life cycle of this species-at-risk. Researchers captured male Canada Warblers in Lesser Slave Lake Provincial Park and at three other sites across North America (in Manitoba, Quebec and New Hampshire) and attached geolocators to them – small devices that record where the bird had been using the time of sunrise and day length.

The results from this study (published winter 2020) show the routes taken by each Canada Warbler during their fall migration. Most interestingly for our birds, the study showed that, instead of taking the shortest possible path south, Albertan Canada Warblers almost all travelled east into Manitoba first. Except one bird, who followed the Rocky Mountains south instead. It is possible that they use this route to avoid the large agricultural regions in southern Alberta, which are very different from the dense forests that they prefer. 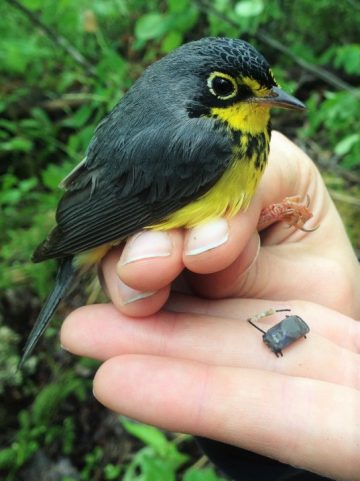 Above: Archival picture of a Canada Warbler and his geolocator which was recovered in 2016 after being deployed in 2015. Geolocators cannot wirelessly transmit data and need to be found again to recover their logged data.

Once they had passed through North America, all of the Canada Warblers met up at the Gulf of Mexico. Most of them travelled overland through Central America, but a small number of more adventurous birds flew straight across the Gulf to the Yucatan Peninsula. From there they converged on their wintering grounds in northern South America: of the ten Canada Warblers from Alberta that were studied, five overwintered in Venezuela and five in Colombia – nearly 7000 km away!

While it is fascinating in and of itself to know exactly where the Canada Warblers that we see each spring and summer go each fall, the results of this study also have a practical purpose. By demonstrating that birds funnel into a narrow space around the Gulf of Mexico and Central America before spending the winter in specific areas of Venezuela and Colombia, it proves that conserving habitat in these regions is vital to the continued survival of Canada Warblers from all across their breeding range. Fortunately, a simple way to support the Canada Warbler is by buying shade-grown coffee: studies have shown that shade-grown coffee plantations offer good-quality overwintering habitat to not only Canada Warblers but also many other migratory birds.

Meanwhile at the banding lab, the spell of heavy rains on May 28th caused an uptick in migration during the sunny days that followed. Many warblers were seen migrating overhead, mostly Tennessee Warblers and American Redstarts, and the banding lab was busy with many Swainson’s Thrushes and Canada Warblers. A few interesting and unusual species were seen as well: Black Terns, a single Barn Swallow, a Grey Catbird, and a Veery that turned out to be just the ninth one banded in LSLBO’s history! Overall though spring migration is coming to an end, and our field staff is beginning to prepare for a summer of surveying breeding birds instead.