As spring migration monitoring begins to wrap up for the season, the last of the spring migrants continue to trickle in at the Lesser Slave Lake Bird Observatory. The recent wet and windy weather has likely dampened migration for many species, causing them to forage at stopover sites a little bit longer as they wait for better flying conditions. Nevertheless, Mourning Warblers, Canada Warblers, and Eastern Kingbirds are moving through the area. Cedar Waxwings, who feed primarily on fruits, have also begun to arrive, which is a sure sign that summer is right around the corner. 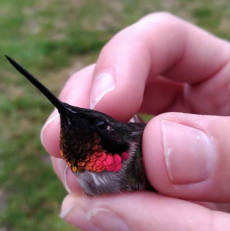 Ruby-throated Hummingbird captured at the lab this week

Some memorable visitors to the bird observatory this week were Ruby-throated Hummingbirds. We typically only capture one or two each year, so it’s always a delight when one of these tiny migration marvels makes an appearance. Weighing about as much as a quarter, most Ruby-throated Hummingbirds overwinter in Central America and travel to their breeding grounds by crossing the Gulf of Mexico, an incredible nonstop flight of more than a thousand kilometres. They can beat their tiny wings up to 75 times per second and have an incredibly fast metabolism, which means they are constantly on the move in search of flowers and nectar. In fact, hummingbirds can go into a hibernation-like state of torpor or even die without food in as little as 40 minutes! For this reason, special training and permits are needed in order to band hummingbirds and, like many bird observatories in Canada, we don’t band them at the LSLBO. We simply extract them from the nets, offer them a snack of sugar water if needed, and send them on their way. 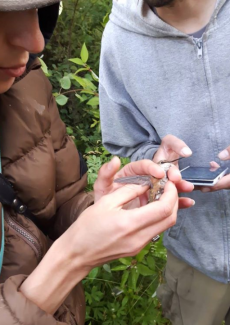 In 2017, an adult female Rufous Hummingbird originally banded near Juneau, Alaska on July 5 was recaptured on July 12 at the LSLBO. She flew a whopping 1200 km in just one week!

One of the easiest ways to attract these amazing little birds to your backyard is by hanging a specialized hummingbird feeder and filling it with sugar water. The basic recipe for homemade “nectar” is one quarter-cup of table sugar for every cup of water. Remember to wash your feeders regularly and change the sugar water every two days or so before it grows cloudy or discoloured, especially when the weather is hot; sugar water ferments and turns into alcohol at high temperatures and feeders can become a vector for disease if not cleaned properly. Avoid adding any additional food colouring or dyes as they are not necessary and may do more harm than good. Feeders may also attract some unwanted visitors, especially in bear country, so be extra mindful where and when you choose to hang your feeders. Alternatively, consider adding some bird-friendly plants to your flower beds this summer! Hummingbirds are naturally attracted to red and orange tubular flowers, so species like paintbrushes, honeysuckles, and larkspurs are all excellent choices that may increase your chances of seeing one of these iridescent little jewels of the boreal forest this summer.

Don’t forget to check out our June 3 Daily Census Checklist on eBird!