After the rush of about 44,000 geese last period from April 29 to May 5, migration monitoring has become dominated by songbirds at the Lesser Slave Lake Bird Observatory. Although the windy and rainy periods around the weekend put a damper on migration activity, since birds spent more time foraging rather than darting directly overhead, we were able to easily identify many species spending time locally for the first time this year. 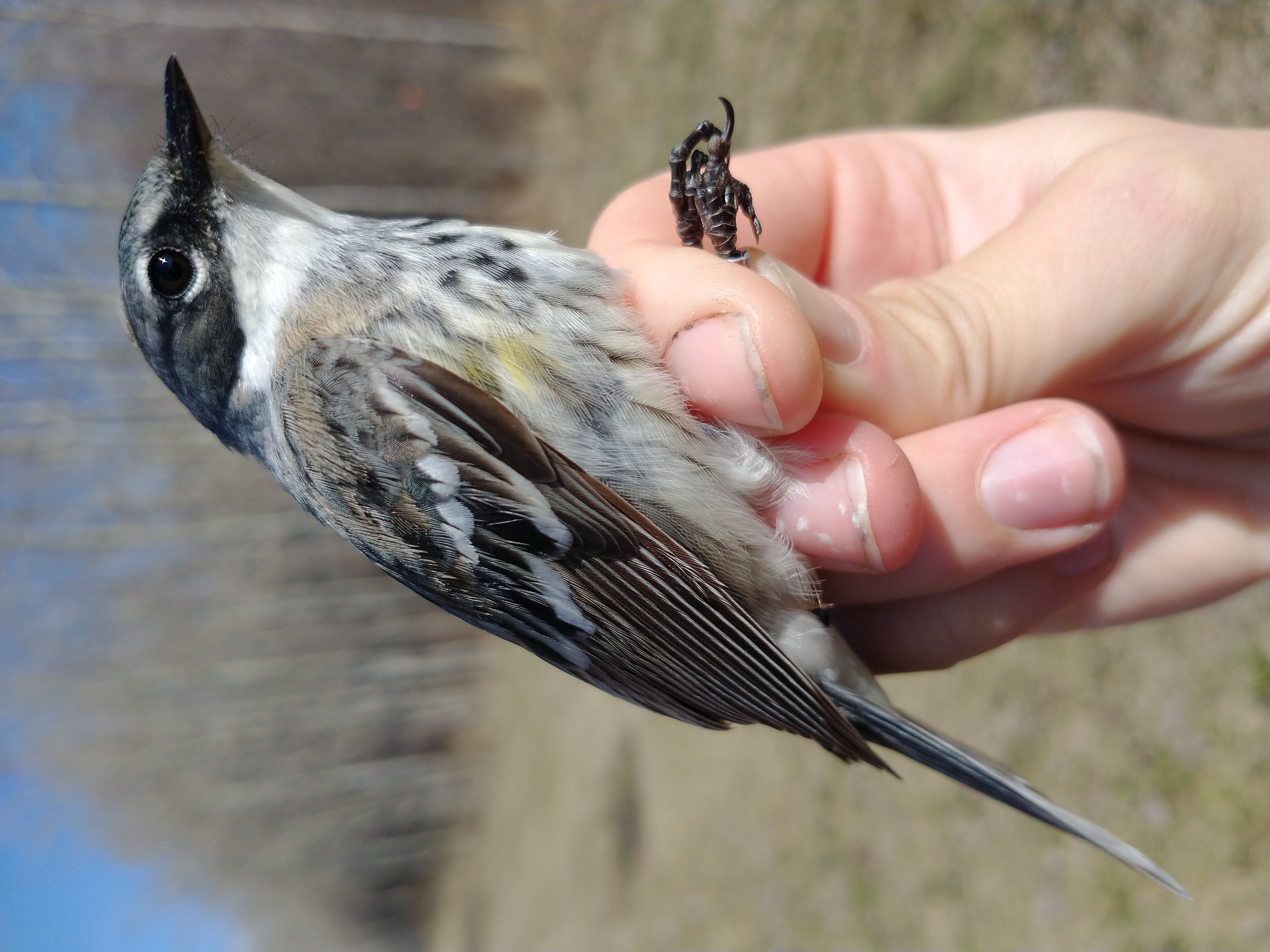 Above: Myrtle Warbler captured this week.

Among these season firsts were many birds that provide the still dull brown forest with a splash of colour. Several of which are quite yellow, including Western Tanagers, Yellow Warblers, Wilson’s Warbles, Black-throated Green-warblers, and Western Palm Warblers. Exempt from any travel restrictions, these birds have already travelled a long way to be here and many have father yet to go. Wester Palm Warblers, for example, overwintered over a wide range between 3,000-6,000 km away in the southeastern United States to as far south as Panama. They migrate back every summer to seek out the open coniferous bogs in which they breed and are among our first warbler species to reappear. 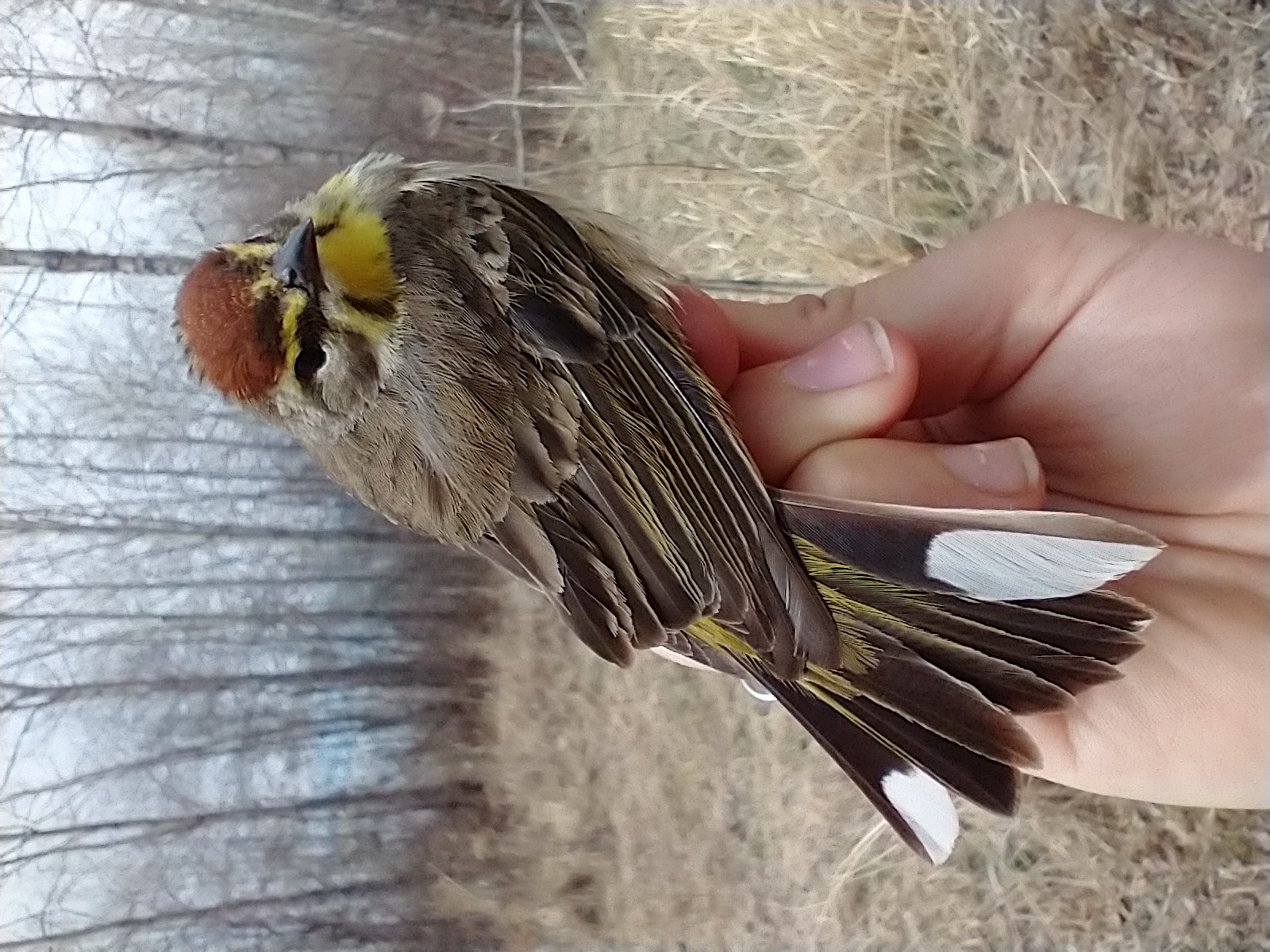 Above: Western Palm Warbler captured this week. Not only do Palm Warblers and Myrtle Warbler have similar life histories, but they even look quite similar in the fall (but not the spring, thankfully).

Similar to Western Palm Warblers, Myrtle Warblers are among the first songbirds to bring colour and song back into the forest after the long, cold winter most species escaped. Like Palm Warblers, Myrtle Warblers have a diverse diet and do not need to rely solely on insects for food. This allows them to spend winters much farther north in the United States than other warbler species, which often overwinter in South American countries – sometimes only staying as far north as Panama. Since they have a shorter distance to travel and the consequences of a spring blizzard are less dire because these species can forage in the snow, it only makes sense that they would arrive the earliest. And arrive they did this week with a burst of migration on May 11 with over 1,500 Myrtle Warblers counted in a single day.

Other season firsts included some larger birds which we do not capture, such as Belted Kingfisher. These observations of ‘large’ birds were made richer as the lake continues to thaw, and we are treated with a diversity of waterfowl. Although most of the species we recorded for the first time out on the lake this week were firsts for us, many of these waterfowl species have been present on small ponds and rivers for a couple weeks now. Since it takes the ice so long to melt, our ability to record the arrival dates for most waterfowl is poor, unless they fly over the lab in large flocks like the geese. They become a key group for local citizen scientists to monitor through eBird observations at better locations.

Are you an eBird contributor? If you are, you can see a sample of the data we collect at the station. Every week we post our Wednesday census to eBird. Our census is a highly standardized survey in which one of our researchers walks a 700 m transect along the lake shore recording everything they see and hear over half an hour within 2 hours after sunrise daily. Here is this week’s checklist.

In other news, only two teams will be participating in a friendly competition in the Great Canadian Birdathon. The Birdathon is a yearly fundraiser with teams from all across Canada attempting to see as many bird species as possible within 24 hours. Teams collect donations for local bird conservation groups and 75 per cent of donations are returned directly to that group. The remaining 25 per cent of funds goes to Bird Studies Canada, which uses the remainder to support conservation efforts across the country. Team Tanager will be birding around Slave Lake on May 19, while Team Birders in the Park will be stationed around Sherwood Park during the long weekend (click the team names to donate).

The LSLBO will continue to be closed to the public during the spring migration season. However, we look forward to sharing information on our activities and the birds we see, both through these articles and the LSLBO Facebook page!