This past week we held our annual ‘Owl Night’ out at the Boreal Centre and as it is every year since it started in 2014 it was a very popular and well-attended event. And this year, unlike some other years, everyone was lucky enough to see a northern saw-whet owl get banded – some people were lucky enough to see a couple.

Seeing as we only accept a limited number of registrants to the event I thought I would do a special article just about owls for all the people who wanted to come but were not able to.

The LSLBO has been monitoring northern saw-whet owls since 2004 and in that time we have banded close to 1400 saw-whets, 4 barred owls, 1 long-eared owl and 11 boreal owls. The purpose of the owl banding program is very much the same as the purpose of the migration monitoring station – we are trying to determine long-term population trends.

So why do we have a specific owl monitoring program and no other specific species program? It is because owls are considered an excellent indicator species. They require healthy forests with diverse structure that can support a large prey base. So if owls are doing okay we can infer that the forest is doing okay as well. Owls are also somewhat overlooked by other monitoring programs. There are lots of programs/counts designed for monitoring bird populations, from citizen sciences program to observatories like the LSLBO to breeding bird surveys, but all those program take place during the day and don’t tend to cover owls very well.

As for why we monitor saw-whet owls specifically, it is because they are small and easy to handle and they are migratory. For owl species that do not move around it can be hard to estimate population trends without doing a lot of travelling because you end up just monitoring the ones that live directly in the area you are based at. With saw-whets we see an influx of new individuals every night as they migrate south through the study area. Comparing capture rates from year to year can give us an idea of how the population is doing. Which, in our area, seems pretty stable.

I want to end by highlighting some really cool owl adaptations. Although I only have pictures of saw-whet owls to show these adaptations off, they are features that are true of all owls. For starters let’s talk about an owl’s ears. Owls, like all birds, do not have external ears like most mammals do, they just have a hole in the side of their head. For owls that hole is better described as a massive slit down the side of their face. Their ears are huge and asymmetrical – one is higher on the head than the other. The asymmetry of their ears means that sound hits one ear before it hits the other which allows owls pinpoint auditory accuracy. 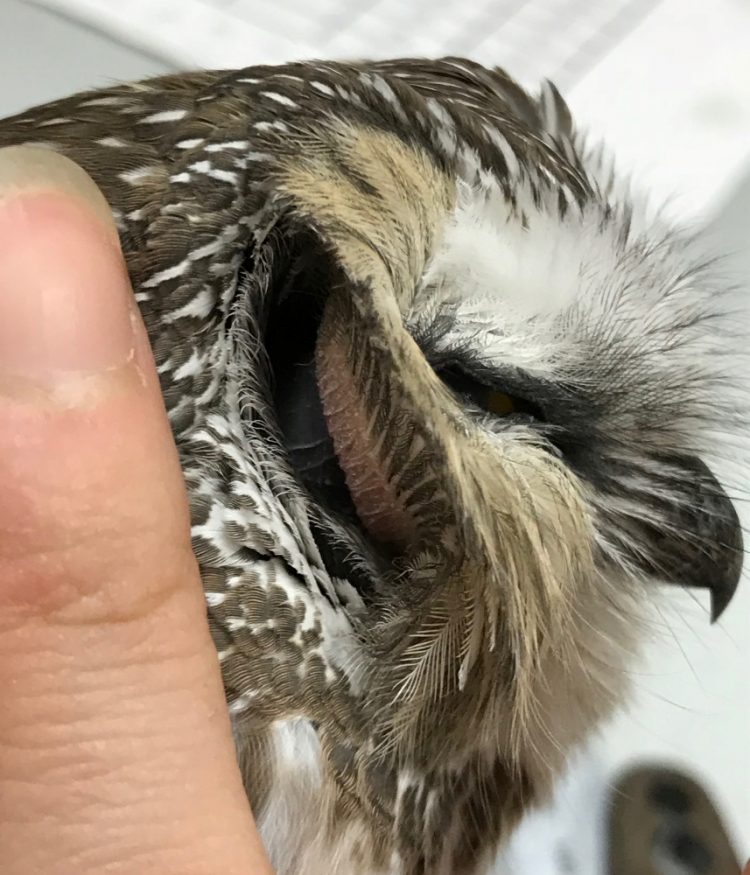 Perhaps the most interesting (and creepy) thing about looking into an owls ear is that you can see the back of their eye in their ear because their eyes are also massive. Owls use their vision and hearing together to be master hunters.  They can hear a mouse scurrying on the forest floor even if it is under leaf litter or snow. They lock onto the sound of the mouse and then they use their vision for navigating to the sound. So their vision prevents them from crashing into sticks on their descent, but their hearing is what actually directs their attack. 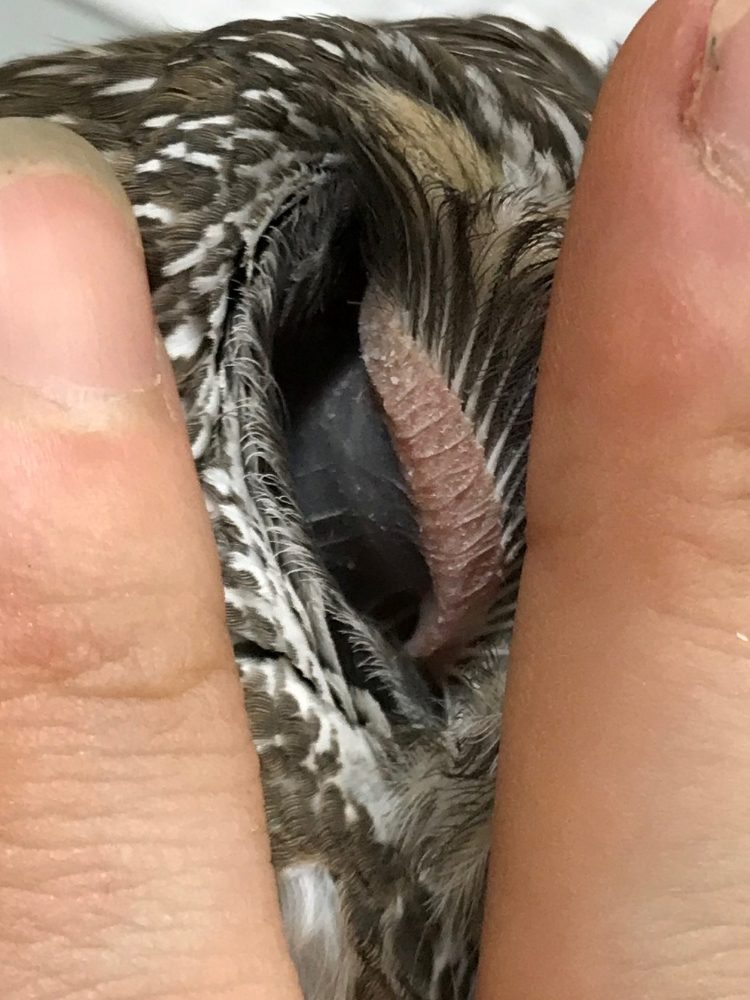 That dark shape is the back of its eye.

Working hand-in-hand with that is their silent flight. Owls have combs on the leading edges of all their flight feathers that break the air in front of them allowing them to fly perfectly silently. Silent flight means their prey can’t hear them coming and it also means that they do not drown out the sounds of their target with the whooshing of air over their body as they swoop down. By being silent they can continue to track the movements of their victim even as they dive towards it. 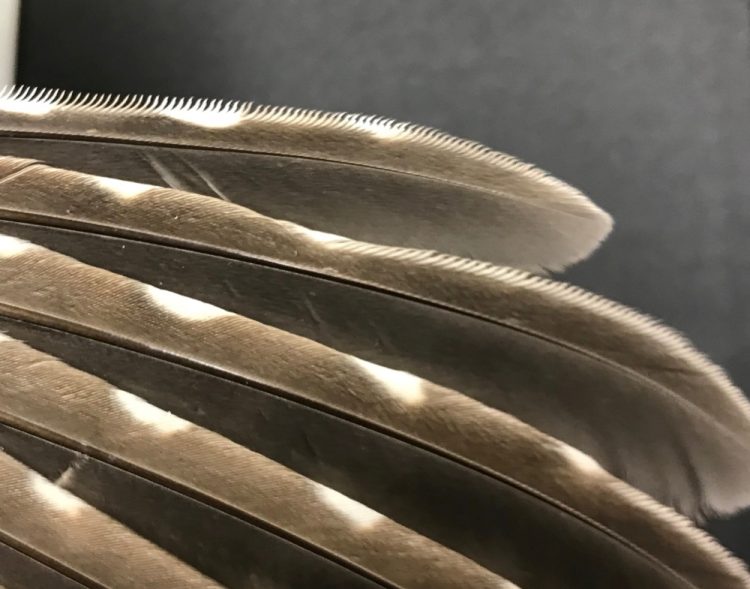 Once they reach their victim the last adaptation I want to mention comes into play. Owls have what are called zygodactyl feet. What that means, essentially, is that they have an opposable toe. Their feet are designed so that they can have three toes forward and one back for perching, but then they can flip one of those forward-facing toes back so that they have two in front and two in the back for extra grip on their prey. And their grip is incredible. Their tendons work almost like ratchets, they can tighten their grip on their prey and then relax their muscles without actually relaxing their tendons so that they can tighten again. They can do this several times and for them to release their grip requires they engage muscles as opposed to just relaxing the way we would release our grip. 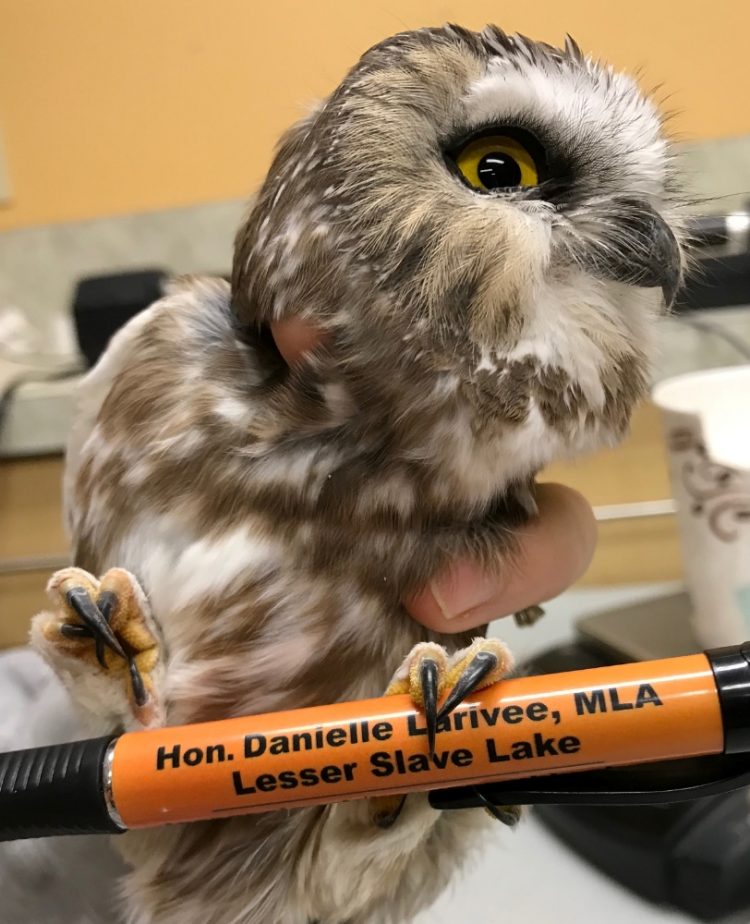 Feet showing the different grips. The left foot is in the ‘perching grip’ and the right foot that is grabbing the pen is showing the ‘killing grip’.