It has been yet another unusually busy week of Fall Migration Monitoring for the LSLBO with 264 birds banded. This brings our fall banding total to 3563, officially making this the busiest fall season in our 26 years of monitoring with over a week left to go! The former busiest fall season was in 2002 when 3496 birds were banded. 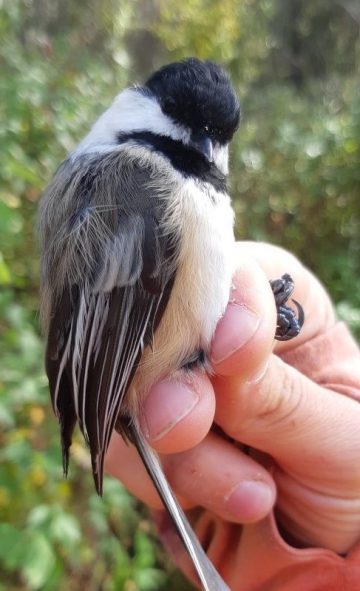 Pictured: The Black-capped Chickadee that was bird #3497 banded this fall, officially breaking 2002’s fall banding title, making this the busiest fall for the LSLBO ever!

The majority of migrants are still Myrtle Warblers and Orange-crowned Warblers, with a trickle of our late fall migrants, such as Slate-coloured Juncos, White-crowned Sparrows, and Greater White-fronted Geese. However, the most surprising species that we are seeing move in large numbers is a species that does not migrate – the Black-capped Chickadee.

We have observed over 1500 Black-capped Chickadees this fall with especially large movements over this past week. Several days recorded over 100 chickadees with the busiest day seeing over 400. In fact it is a record breaking fall for this species since we have banded 169 Black-capped Chickadees, surpassing their previous biggest fall in 2000 where 142 were banded. The most recent big chickadee year was five years ago in 2014 with 105 banded. 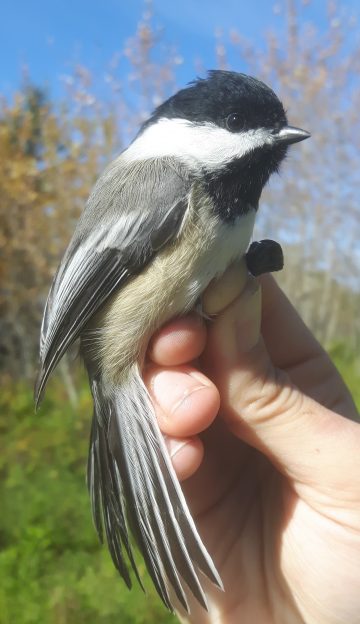 Remarkably, our other local chickadee species, Boreal Chickadees, are also moving through the area in relatively high numbers. This is unusual since the mature aspen forest of our station is not their preferred habitat. We have already crushed the previous ‘big’ years for Boreal Chickadees, which was a tie of four banded in both 2000 and 2016, with eleven banded so far this fall. Four of these were captured on the same check in the same net! 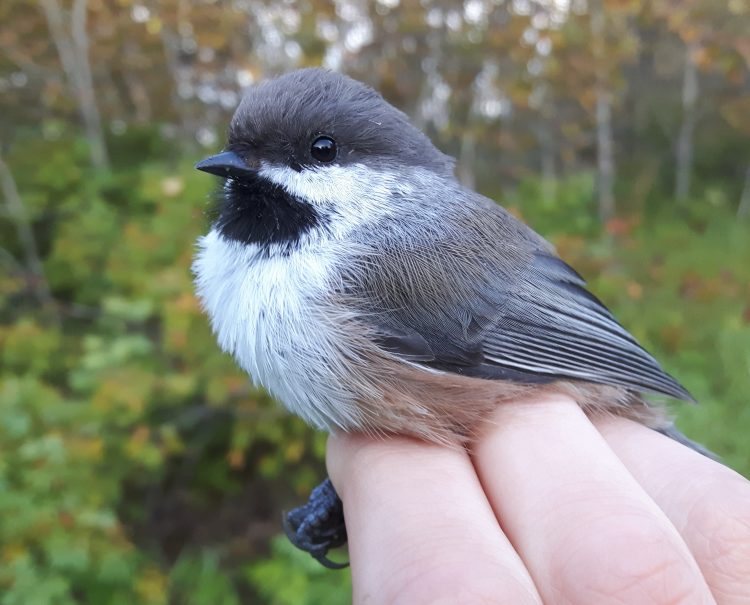 Pictured: One of the Boreal Chickadees that was banded early in the fall. Although this little guy contributed to the record breakers, it was not the bird that pushed us over the previous record (I was not paying enough attention for that picture…).

Why is it that we are seeing so many chickadees when these species do not migrate and can be found locally year-round? The fall is a time for many bird species to undertake post-fledgling dispersal. This is when young birds move out of their parent’s territories and try to find space of their own. This dispersal away from the bird’s parents is thought to be an adaptation to prevent inbreeding. When these movements happen in exceptionally large numbers, it is called an irruption, which can temporarily expand the species’ range.

Irruptions of chickadees are uncommon and may be caused by habitat destruction, meager food resources, and high reproductive success. Ample food last year may have allowed more chickadees to survive through the winter and breed in the spring. Having more breeding adults will generally produce more young. All of a sudden there is an overabundance of chickadees on the landscape, so much so that competition for food and space is fierce. Since young birds are inexperienced, they often cannot compete with adults and are forced to move. When this is attempted by many chickadees, a domino effect can happen than pushes chickadees away in waves. Although I wonder if the forest fires in Northern Alberta this summer have played a role in this chickadee irruption, I suspect it was a perfect storm of high reproductive success, habitat destruction, and scarce food that is forcing the hordes of chickadees to hit the road.