Birding, both in regards to banding and observations, has slowed significantly since my last article. It’s funny how one day there can be thousands of myrtle warblers migrating and foraging and then the very next day maybe five trickle through the area. That is the nature of bird migration, though, these birds are travelling and the day must come when they will all be gone until next spring. With the drastic reduction in myrtle warbler numbers, slate-coloured junco and American tree sparrow have become the most common bird species around the observatory. These two species breed at the northern tree line and on the tundra, which is why we see them so late in the season – it is very likely that some of them have already flown close to 3000 km. Especially the American tree sparrow, they have potential come from as far as the islands of the Arctic Archipelago. 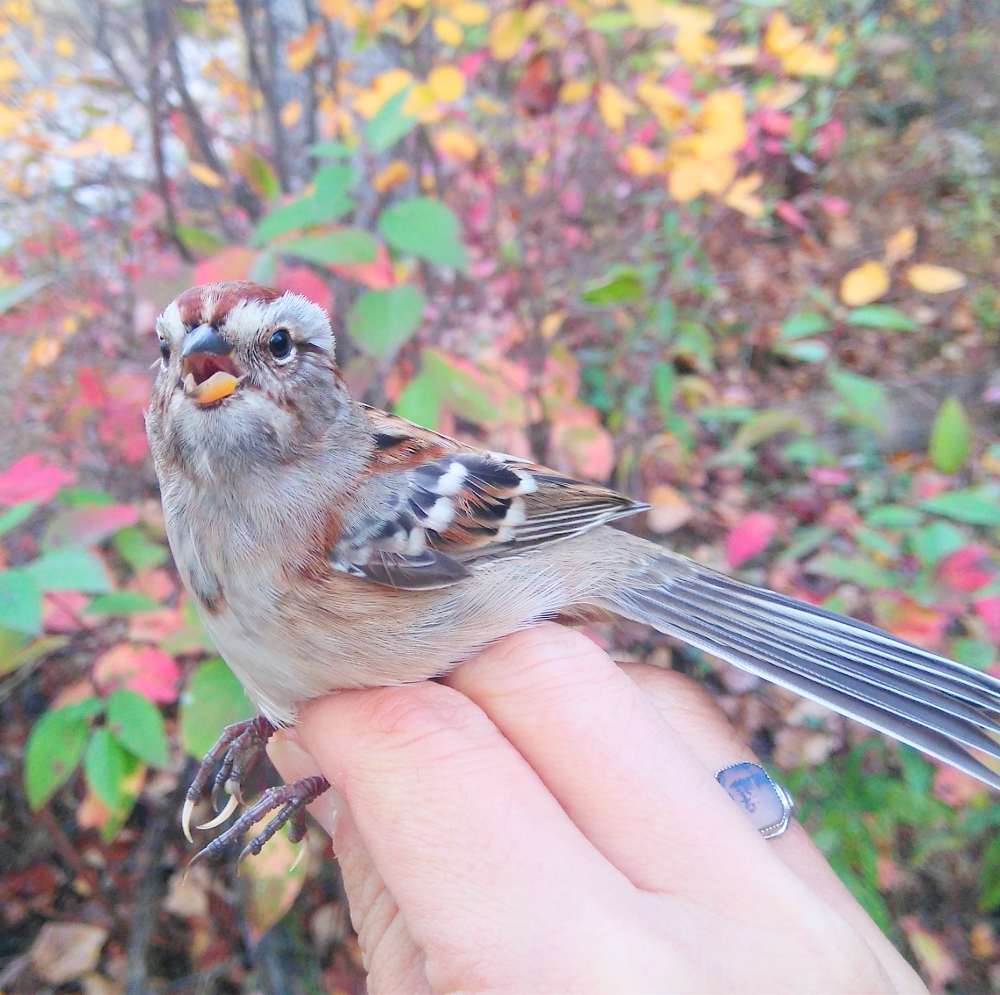 Slate-coloured junco are actually one of six subspecies of dark-eyed junco. The slate-coloured is by-far the most widespread of all the subspecies as well as the most northerly. Their breeding range extends all the way from Alaska to the Maritimes covering the northern halves of all the provinces. Printed-range-wise, the slate-coloured is the only junco we get in Alberta, but as with all bird species, juncos don’t always stick to where they are supposed to be. The Oregon junco occurs in the south-west portion of United States and upwards into southern BC and along the coast right up to Alaska. Despite being restricted to the other side of the Rockies, Oregon juncos turn up here on occasion, including one gorgeous adult male that we banded this week. Oregon junco aren’t the only west-of-the-Rockies species that we sometimes encounter. Varied thrush, Townsend’s solitaire and northern pygmy owl are all examples of mountainous species that follow the Swan hills extension of the foothills all the way to Marten Mountain. 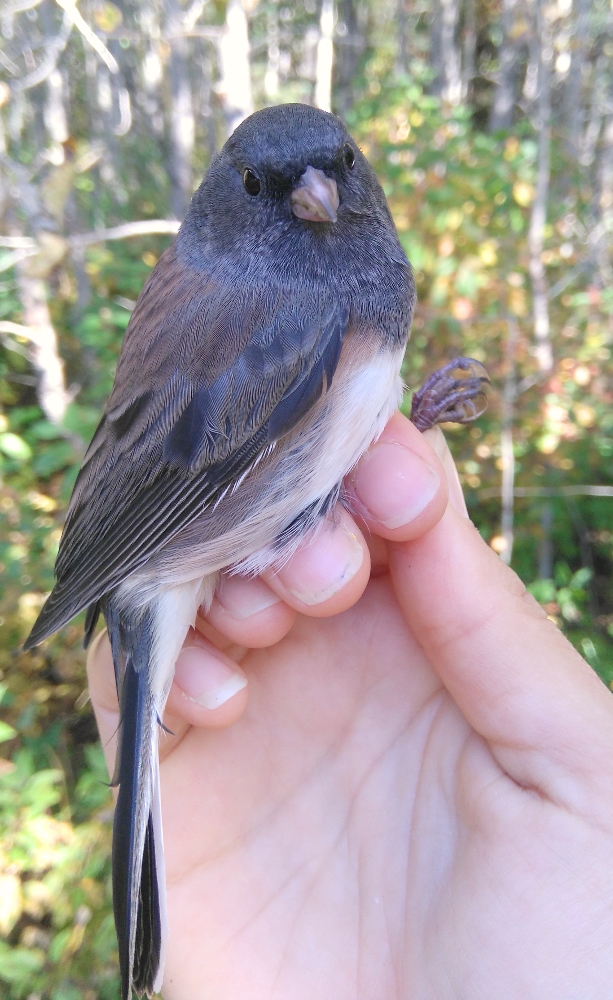 On top of the Oregon Junco, we also caught a bird species I have been waiting years to catch – a boreal chickadee. Boreal chickadees are uncommon birds that live in mature coniferous forests. They look similar to black-capped chickadee except they have brown sides and a brown, rather than black, cap. They also sound similar, but if you imagine a black-capped chickadee sounds like an adult shouting ‘chickadee-dee-dee!’ then a boreal sounds like a three-year old girl screaming ‘Chick-A-DEE! DEE!’. We don’t catch many boreal chickadees despite the fact that some breed in one of our summer MAPS sites. The part that gets me is that since I started working here in 2008 every single boreal chickadee we’ve caught was caught while I was on a day-off… Except this one. Actually two. In a nets with 9 black-capped chickadees, two little boreals snuck in. Chickadees, regardless of which kind, are tenacious, aggressive birds to handle. Don’t let their small size fool you, they have strong, sharp beaks and claws – they make sharp-shinned hawks look like pussy-cats. In light of their feisty nature, a net full of chickadees is never anything to celebrate, except for this time. This time I caught my white-whale and now I can retire. 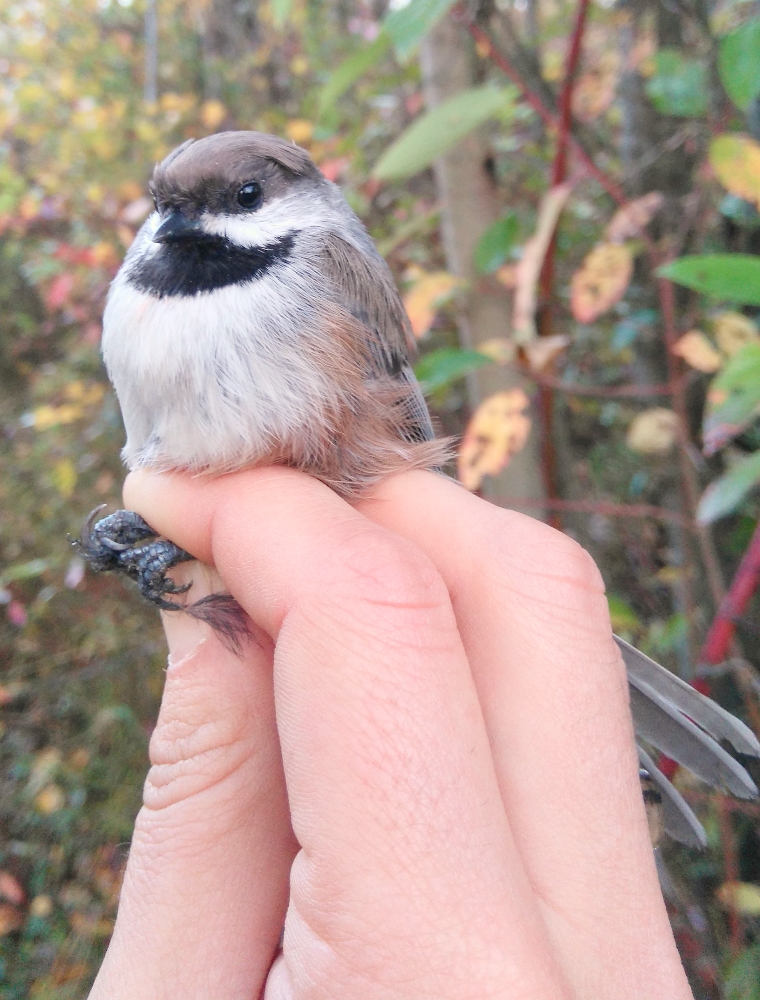