It’s official, Fall Migration Monitoring 2020 has been the busiest for bird banding in the Lesser Slave Lake Bird Observatory’s 26 years of standardized monitoring. If you recall, this record was recently broken last fall when 3,761 birds were banded. With a week left to go in the fall program, we are already at 3,936 bands from 60 species – nearly double our average of 2,088 bands per fall.

Why have we had another extremely busy season? Lockdowns in response to Covid-19 across the globe have impacted wildlife. From dolphins in normally busy Italian ports to pumas in the middle of Chilean cities, unusual animal movements have been recorded. Many scientists are studying these phenomena, and although I eagerly await their results, I do not believe that the pandemic response north of us has had a significant impact on the LSLBO’s fall trends. That’s not to say that there has been no impact from the economic slowdown, but that its effects are likely not large enough to explain our busy nets, both this year and last. 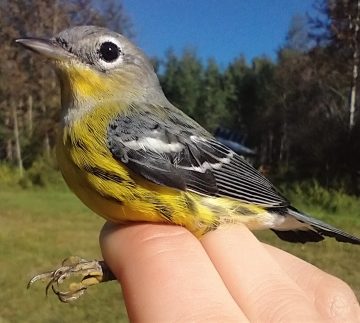 Which leads us to our next possibility: perhaps the events in the Southwestern United States and Mexico in which hundreds of thousands to a million migratory birds have died has impacted migration locally. Though we do not yet know the exact reason for these deaths, a cold snap in the region that brought snow in early September while wildfires rage on the West Coast may be partly to blame. Smoke has reached us and birds can detect poor weather; perhaps they delayed their migrations? Generally when a storm front or wildfire is close to the station we see reverse migration. This is when birds fly against the direction of migration and head backwards. We have not seen heavy reverse migration this year, suggesting that our birds have not anticipated immediate threats that would force them to turn back or risk death. Moreover, this degree of die-off was not experienced last year which banded then-record breaking numbers.

What I suspect is the greatest influence happened last year. Our station is strategically placed along the shores of the Lesser Slave Lake. Birds do not fly in a straight line south, but will pick what seems to be the safest route as they go. They do not want to fly over open water where predators can easily attack. Nor do they want to fly over large hills where the weather is often poor and unpredictable. The lake and Marten Mountain combine to funnel birds to us.

On May 18, 2019 a forest fire that would join other fires to become the McMillan Complex started northeast of the station. This fire complex burnt 273,045 hectares before being contained, creating a large area no longer ideal for birds to migrate through. The fire’s footprint may be an additional funnel that forces more birds to us, causing two busy years back-to-back. If this is indeed the case, then we should continue to see busy falls until the burnt area has regrown enough that birds can again safely migrate through. 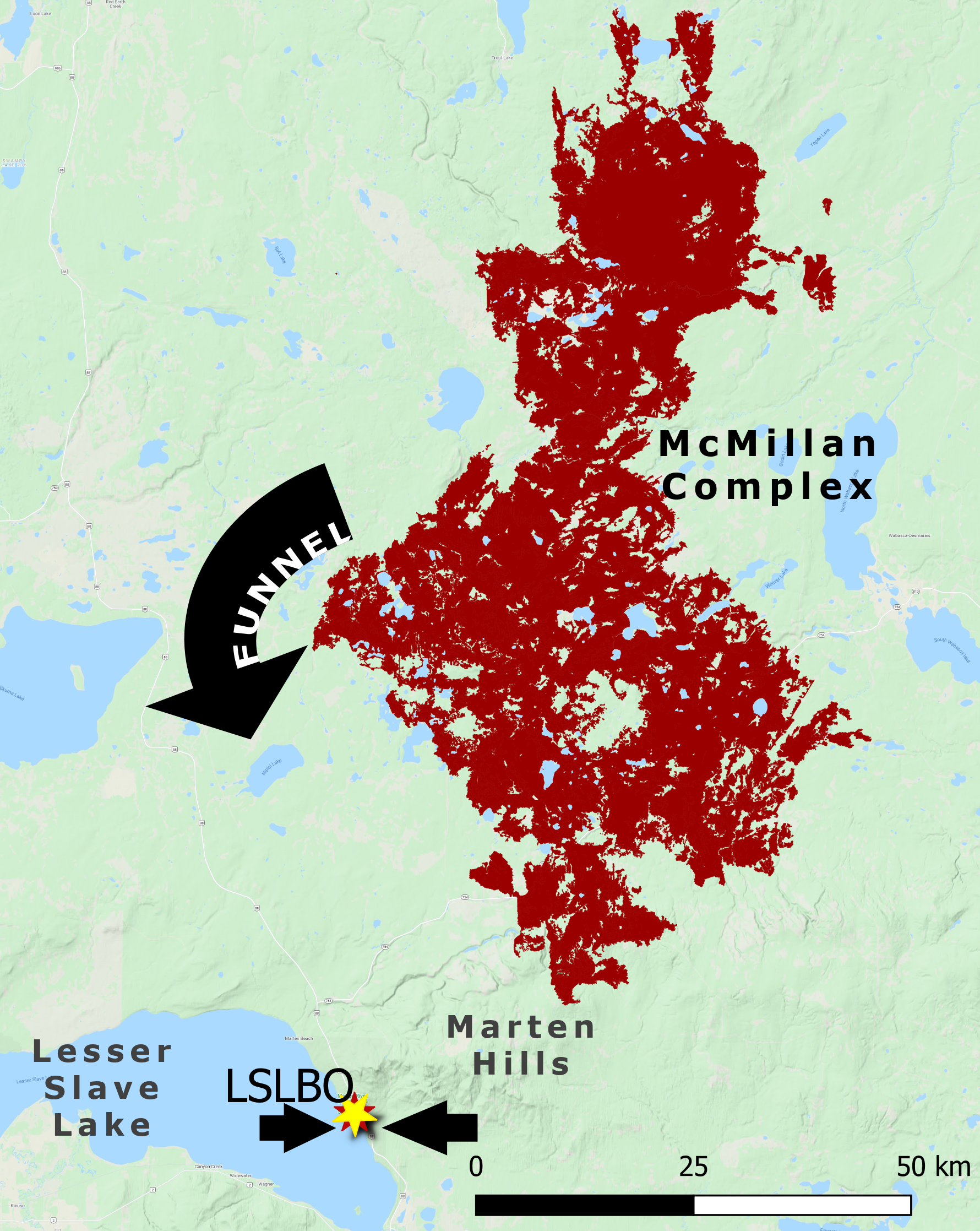 Pictured: Map of area burnt by McMillan Complex in 2019 (red) in relation to the LSLBO (yellow star). Black arrows represent the direction that birds are funneled; to the east from the lake, west from the mountains, and to the south around the large burnt area where before they could migrate through. Fire shapefile from Government of Alberta open database, basemap from Google.