Fall migration monitoring came to an end this past week and I can now say for certain that we have not broken the record for the busiest season, though we did achieve the second busiest fall season in 25 years of monitoring. Once the numbers are all finalized over this next week I will give a complete account of the season and tell you all how many birds were banded and of what species. I know many species broke their fall records and there were also some highlights that I will be sure to write about.

As for this week I wanted to write about an interesting capture during owl banding this week. It was a barred owl, one of our resident species of owls. We have banded four barred owls before but what really made this one interesting was that it didn’t need to be banded; it already was. This particular owl was banded all the way back in 2009 and at the time it was already at least two years old. Many people are very surprised by this – a bird that is at least eleven years old, but it is not so odd. Birds actually have the potential to live very long lives. As one man said once at a banding workshop “birds can live forever if they don’t die.” 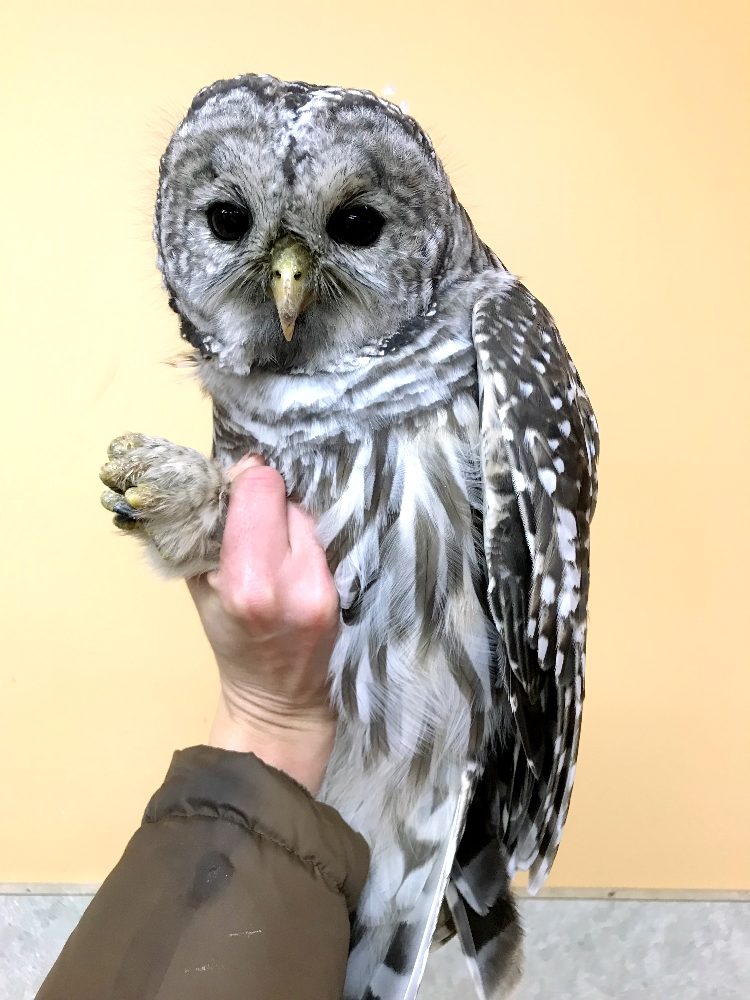 An odd quote to be sure, and something that could technically be true of most things – if a thing didn’t die then by default it would live forever – but it is quite a nice way to describe bird longevity. Many people like to compare birds to mammals of similar sizes, but birds and mammals are more different than just feathers versus fur. For one thing, birds have a one-way breathing system as opposed to our two-way breathing system. It is a bit difficult to explain, but a bird’s lungs have two tubes leading out of them so air moves through them as opposed to settling in and then going back out the same way it came in.

What this amounts to in regards to aging is that birds do not acquire free radicals. Free radicals are atoms that do not have a full orbit of electrons and because of that they are unstable and seek to bond to other atoms. Oxygen that sits in our lungs ultimately ends up forming free radicals that leads to the oxidization of other cells which contributes to aging and a wide range of negative health conditions. I am sure everyone has heard of antioxidants and ‘super foods’ that contain them. Antioxidants help the body to regulate harmful free radicals.

Birds do not need antioxidants because they do not have free radicals from stagnant oxygen sitting in their lungs. And because their cells do not suffer from oxidation they do not break down like ours do. Essentially birds do not age. A one year old bird and a twenty year old bird’s cells look the same under a microscope. So if they don’t die, they would live forever. Pretty neat stuff. Stuff that make you think birds belong in a fantasy novel. Ageless creatures of ethereal beauty, born knowing how to sing and travel vast distances guided by innate knowledge.