On September 1st, the Lesser Slave Lake Bird Observatory began its fall owl banding program. While the LSLBO never captures huge numbers of owls, this year had an especially slow start – it wasn’t until September 8th that the first Northern Saw-whet Owl was captured for the year! 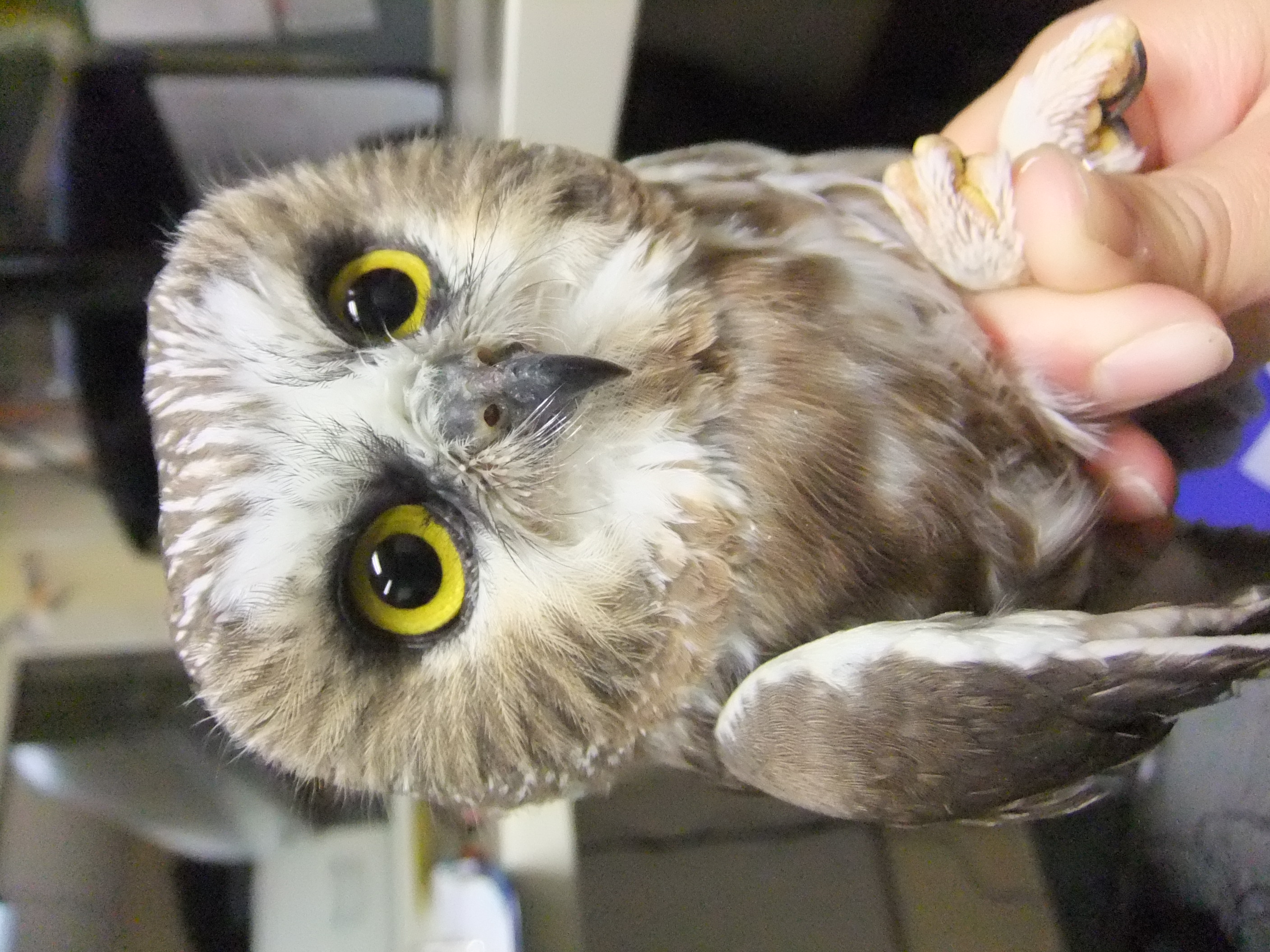 Pictured: The Northern Saw-whet Owl is one of Alberta’s smallest owls.

The Northern Saw-whet Owl isn’t quite the smallest owl in Alberta – that title belongs to the Northern Pygmy-Owl, which lives in the mountains – but it is one of the smallest, topping out at 21 cm (or 8.3 inches) tall, approximately the size of a can of soda. As is the case with most birds of prey, the females are slightly larger and heavier than males, and may weigh up to 95 grams (about as much as a stick of deodorant) while males can be closer in size and weigh to an American Robin (78 grams, or the same as a DVD case containing one DVD). Their name comes from their call, a rhythmic ‘whoot-whoot-whoot’ that reminded early settlers of the sound made when sharpening or ‘whetting’ a saw-blade. 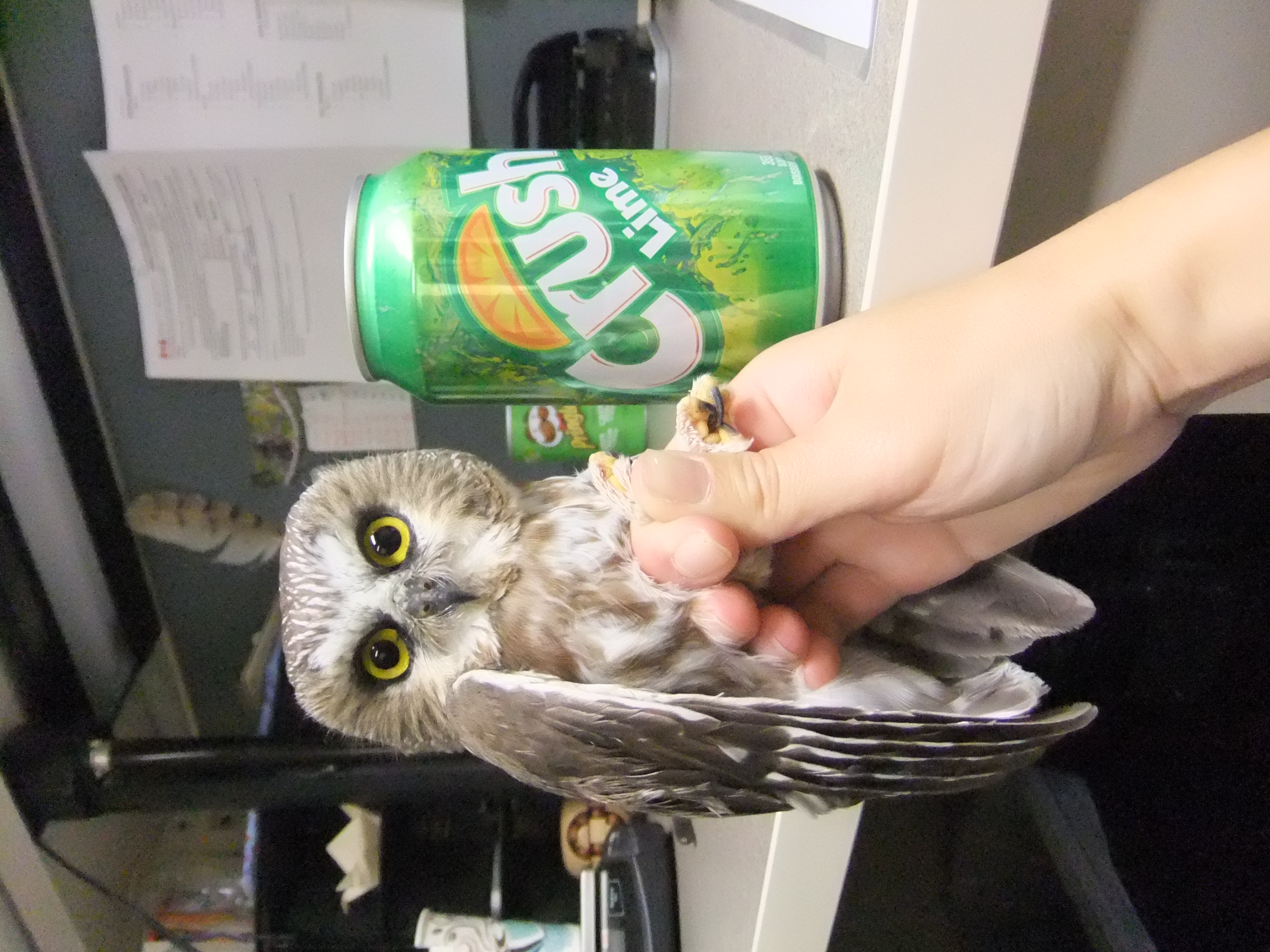 Pictured: A fully-grown Northern Saw-whet Owl is approximately the size of a can of soda.

For a long time, Northern Saw-whet Owls were assumed to be residents who remained on their breeding grounds year-round. When individuals were seen outside of the breeding range they were assumed to be irregular wanderers who had ended up further south purely by chance. Gradually, through the work of bird banders and bird banding stations, it became evident that although some Saw-whets are residents, others are migratory and travel south into the southern United States each fall.

Today, Northern Saw-whet Owls are the target not only for our owl banding but also for owl banding programs across North America. Beginning one hour after sunset, we play a tape of the Saw-whet Owl call that lures the migrating owls in so that they can be captured and banded. On average the LSLBO bands one hundred Saw-whet owls each fall, ranging from a high of two hundred in 2006 to a low of forty-five in 2013.

In 2016, we began running a Boreal Owl banding program in parallel with the Northern Saw-whet Owl banding. Boreal Owls are another small species of owl, only slightly larger than the Saw-whet. Since the program began, the LSLBO has captured twelve Boreal Owls in total. This may seem like a modest return for a fairly large investment of time and effort, but considering how little is known about this species even not catching any Boreal Owls can provide valuable information for researchers.

Meanwhile, our Fall Migration Monitoring has continued in tandem with the Northern Saw-whet Owl banding. Two busy days on September 4th and 5th, when 421 birds were banded, helped to push the season’s banding total to 3,352 birds of 55 species! The majority of the birds that were captured were Myrtle Warblers, which currently make up a little over one fifth of all the birds banded this fall.