Last week I wrote that our banding total could reach the top three if the weather cooperated with us… No big surprise it did not (I firmly believe the weather doesn’t like being taunted). This week started with rain, continued with rain and then ended with snow. With all that bad weather we missed out on quite a bit of netting but surprisingly we were still able to catch and band quite a few birds – turns out we didn’t need the weather to cooperate with us after all (take that weather!).

In-fact on the one nice weather day just under 170 birds were banded, most of which were myrtle warblers. It’s hard to say if there will still be myrtles around once this weather smartens up, but if there are we’ll actually have a decent shot at breaking the record for all-time busiest fall. At 2960 birds with just over two weeks to go we’d have to catch another 400 birds, which is only an average of 22 a day. Doable, especially if we can pull off some more 100 plus bird days. 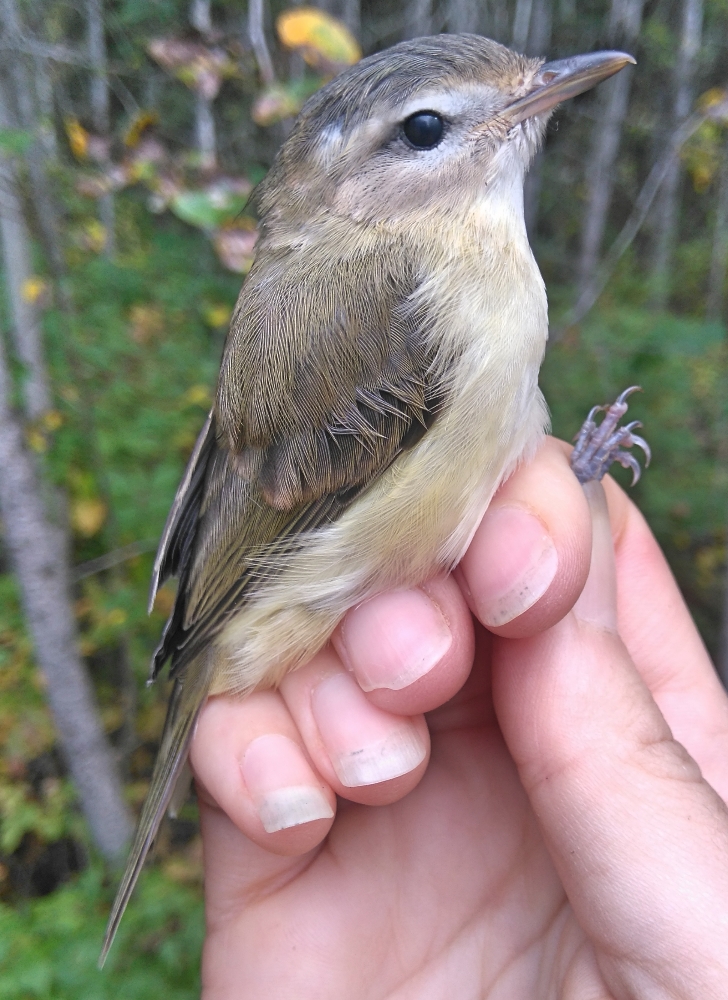 Warbling vireo banded on our busy day this week

Overhead the most common bird species we saw over the past week was still the myrtle warbler, but they are now joined by increasing numbers of orange-crowned warbler and white-crowned sparrow. Other commonly seen birds, but ones we do not catch, are American pipit and Lapland longspur. Both these species are arctic breeders that although are small enough for our nets never seem to end up in them as they do not like to fly through trees.  Hundreds of them will pass by overhead or hop along down the shoreline but in my ten years I have only seen one longspur and zero pipits end up in a net.

Geese of all three species, Canada, snow and greater white-fronted have been moving as well. I always think that is what most people see as a true sign of fall – the large honking Vs of geese heading south. It is just a matter of time until the swans and cranes join them.

Despite things being busy out at the migration station, owl banding is persisting in being slow. Already two weeks in and we have only banded five owls – four saw-whets and one boreal. It is always very hard to predict how an owl season is going to be since we aren’t able to really monitor them through the breeding season. 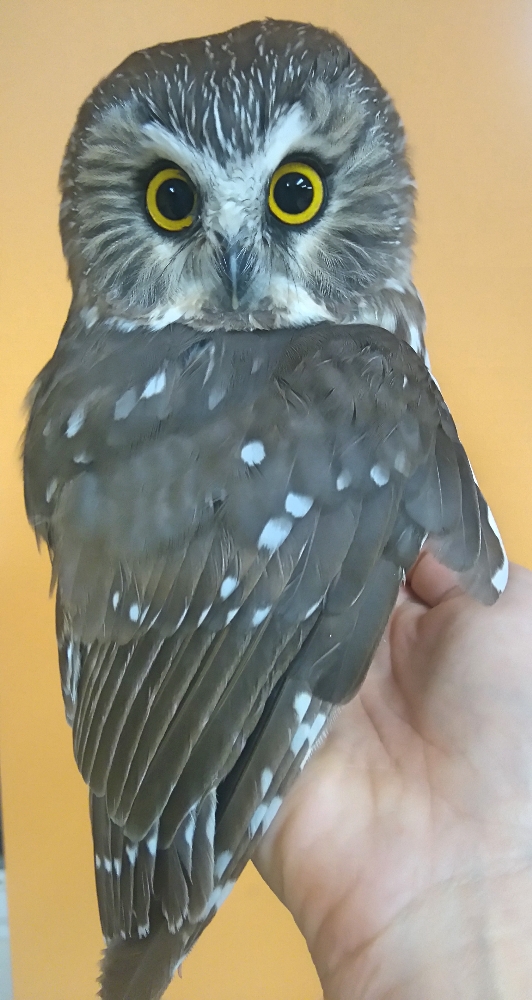 For songbirds we see them every day through all of spring, summer and fall and so it is easier to get a picture of how productive they were on the breeding grounds and what factors might affect the timing of their migration and their numbers. We can also clearly see if it actually seems like bird numbers are low or if they are just not being caught for whatever reason. With owls it is all a big blank. I do not know how they did over the summer and I have no way of knowing if there are owls around that are simply not getting caught. I also have no way of knowing if they are just late; I can just really hope that is the case because it could be a long season otherwise…