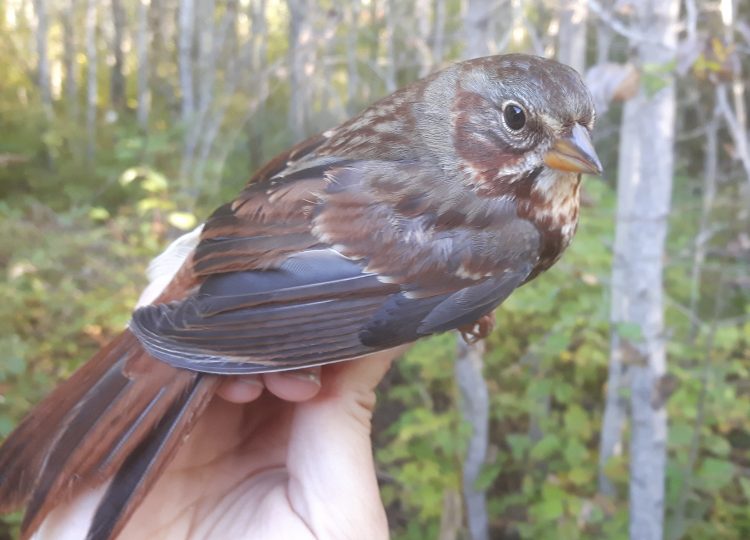 Fall Migration Monitoring continues to keep us unusually busy. Across our past 25 years of monitoring, we band an average of 480 songbirds over the course of September. Yet this year we have banded 706 birds since September began. With over two weeks left to go, we have already banded more birds this September than 20 out of 25 past fall seasons have captured throughout the whole month (see Figure 1, below). It is a close competition with four of the five Septembers that beat this year’s current total, but we are not remotely close to defeating 2016 when 1425 birds were banded in September alone. Conversely, the low point for September banding was 2007 in which only 178 birds were banded. To put that into perspective, on September 6 this week 175 birds were banded, which is almost more birds banded in a single day than 2007 saw in a whole month!

Figure 1. Number of birds banded in the month of September (blue diamonds) during Fall Migration Monitoring by year across our 26 years of monitoring. Current total number of bands so far this September in red. It is likely that this will be in the top five busiest Septembers ever! Will the upward trend continue in future years or are we going to hit another dip similar to 2003-2005? 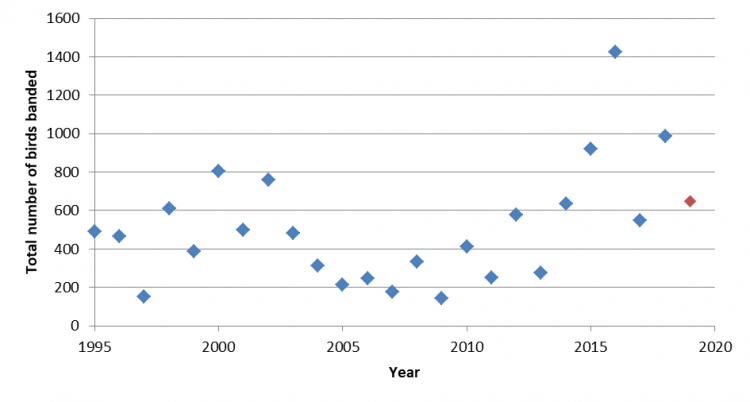 Our total for Fall Migration Monitoring is now up to 3309 birds of 64 species, making this the third busiest fall banding season overall in our 26 years. Only 2002 and 2018 fall seasons exceed this year in total bands. Although I am expecting migration to slow down any day now, there are still two weeks to go and we will have to wait and see what the rest of the season brings.

Not only have we been treated to large volumes of birds recently, but we have also had some interesting sightings and captures. A Peregrine Falcon and a Cooper’s Hawk graced us with wonderful close-up sightings as they migrated down the shoreline. Even more exciting, two Clark’s Grebes were observed on the lake for almost two hours giving a great display as they moved in slow circles and confirmed our suspicions with loud vocalizations. This observation is potentially a first for our station for Clark’s Grebes. Additionally, we banded our 23rd ever Chestnut-sided Warbler. Although records for this warbler species were more common in the early years of the station, we have not banded one since 2014 and are generally outside their range. 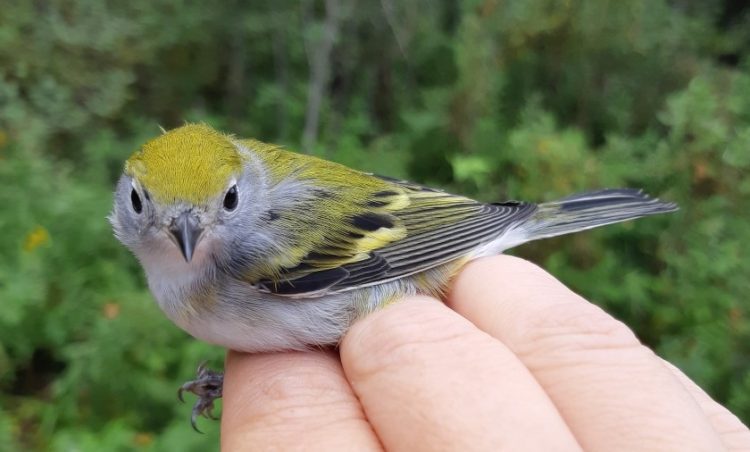 Pictured: Chestnut-sided Warbler captured this week, only the 23rd banded by the LSLBO.

Although you may not have been convinced that fall has been quickly creeping up since July 12 (when we began our Fall Migration Monitoring), the changing leaves may have you more certain. Indeed, we are nearing the end of fall migration. Mostly Orange-crowned Warblers are now moving through the area and we are seeing a trickle of other species that we similarly only observe late in our fall season, such as American Tree Sparrow, White-crowned Sparrow, Fox Sparrow, Gray-cheeked Thrush, Golden-crowned Kinglet, Sandhill Crane, and Greater White-fronted Goose. 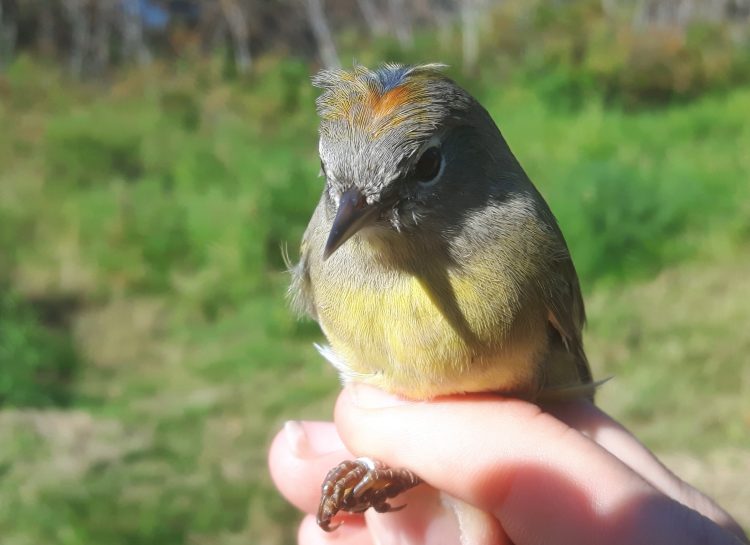 Pictured: Orange-crowned Warbler. I had to blow on his little head to part the feathers to reveal the orange crown of this bird’s namesake which is normally concealed (hence the hairdo).

Owls Migration Monitoring, on the other hand, has been slow with only 15 Northern Saw-whet Owls banded. The overnight windy and rainy conditions have prevented us from opening our nets several times. I am hoping for better luck for Family Owl Night on Saturday, September 21 from 8:30-10:30. If you are interested in trying your luck too, please call (780) 849-8240 or email info@borealbirdcentre.ca to register by Thursday, September 19. Space is limited.