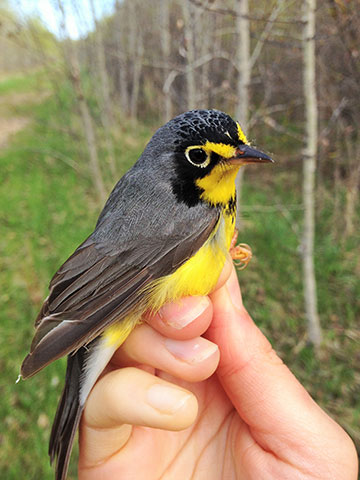 Canada warblers are a threatened species in Canada because they have experienced significant population declines over the past 30 years. They are also one of the least studied warbler species in North America and their general habitat associations on both the breeding and wintering grounds are poorly understood.

Canada warblers are a regular migrant and a frequently encountered local breeder at the Lesser Slave Lake Bird Observatory. The LSLBO has conducted preliminary studies on the breeding ecology of the local breeding population. After the Canada warbler status designation, the LSLBO conducted a full scale research project to understand the breeding habitat requirements of Canada warblers in the western boreal forest. This study focused on measuring the space use and identifying the fine scale habitat features within the territories of the locally breeding population. This study also investigated the factors that influence the size of individual breeding territories. The results of this study will help guide future conservation efforts and contribute to larger scale ongoing projects.