Breeding season is well underway and this week our researchers are observing many signs that birds are right in the middle of their nesting season. While conducting breeding bird surveys in the field as part of a 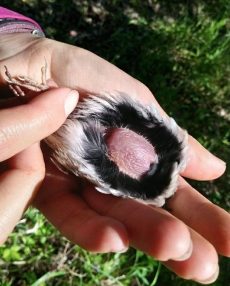 research project for Vanderwell Contractors Ltd., we observed several solitary sandpipers pattering along the road and peeping in an attempt to lure our researchers away from their nearby nests. We also completed the first round the MAPS (Monitoring Avian Productivity and Survivorship) program, which is a continent-wide project coordinated by the Institute of Bird Populations that studies breeding birds in an effort to better conserve their populations and habitats. By banding at these predetermined MAPS sites over the breeding season, we can estimate the amount of adult birds returning to their summer habitats to reproduce, as well as the number of young birds successfully leaving their nests. Although it’s a little early yet for many fledglings, we have been observing lots of birds sitting on eggs in their nests, which means that the forest will soon be full of baby birds!

Our researchers have also encountered several birds with well-developed brood patches, which is a definite sign that they are actively sitting on eggs in a nest. After a mother bird has finished laying her eggs, she loses all the feathers on her breast and belly, blood flow increases to the area, and her skin becomes swollen with fluid. Birds have feathers for insulation to keep their body heat in, but these same feathers also keep heat away from eggs or hatchlings. This brood patch acts like a tiny hot water bottle and enables the mother bird to effectively transfer her body heat to her babies in the nest. Since females typically do the majority of the incubating, only they will develop brood patches in most species. However, in some species like woodpeckers, both the male and female take turns incubating, so they both develop brood patches!

Once the eggs hatch, it only takes a few weeks for the young birds to fledge and start leaving the nest while they are learning to fly. This is also the time of year when we often get calls from people wanting to save a lost baby bird. Remember, the vast majority of “abandoned” baby birds are perfectly healthy fledglings whose parents are nearby and watching out for them. Young birds will leave the nest before many of them can fly and their parents will still be actively feeding them every few hours and caring for them until they are fully independent. So please, leave baby birds alone and let mom and dad look after them